Young people have suffered a drop in income since the financial crisis, but pensioners have enjoyed a big rise, the Institute for Fiscal Studies has said

Pensioners are now the least likely group to be in income poverty, according to the think-tank.
The IFS report also said that most poor people now live in households were someone is working.
The government said there were record numbers in work, and that wages were rising faster than inflation.
On average, incomes rose by 2% in real terms between 2007/08 and 2014/15, according to the IFS.
However, that figure concealed very different experiences for different generations:

The situation we are in is partly economic and partly political.

Economically, we are in a very low interest rate environment. This means that new pensioners buying annuities are getting perhaps two thirds of the annual income that those who retired ten years ago, as the chart below shows. Go back to 1990 and the annual income would be twice as high again, at around £15,000 for a £100,000 investment. So by today’s standards, pensioners do very well indeed. 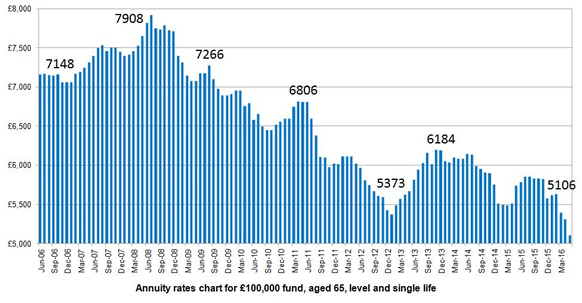 But as the BBC data shows, the pay gap is increasing too, with many young people finding it difficult to find professional employment, forcing starting salaries downwards.

Politically we have a situation where the “grey vote” is important. With people living longer, any government wanting to redress the balance between old and young will probably not last beyond a general election. And it’s a thorny issue, because pensioners see their income as rightfully theirs.