Scottish Income Taxes after the 2016 Election

This year, Scotland gets to use the powers to raise part of its income tax directly

The settlement was a consequence of the independence referendum in 2014 looking like it was goingto be very close indeed. The UK government rushed through a basket of “devo max” promises which became law this year. Now the Scottish Government is responsible not just for spending but for raising taxes too. A quick look at the chart below will tell you how much better or worse off each party wants to make you. The Conservatives have been omitted because they don’t advocate any changes, and their line would be flat at £ zero. 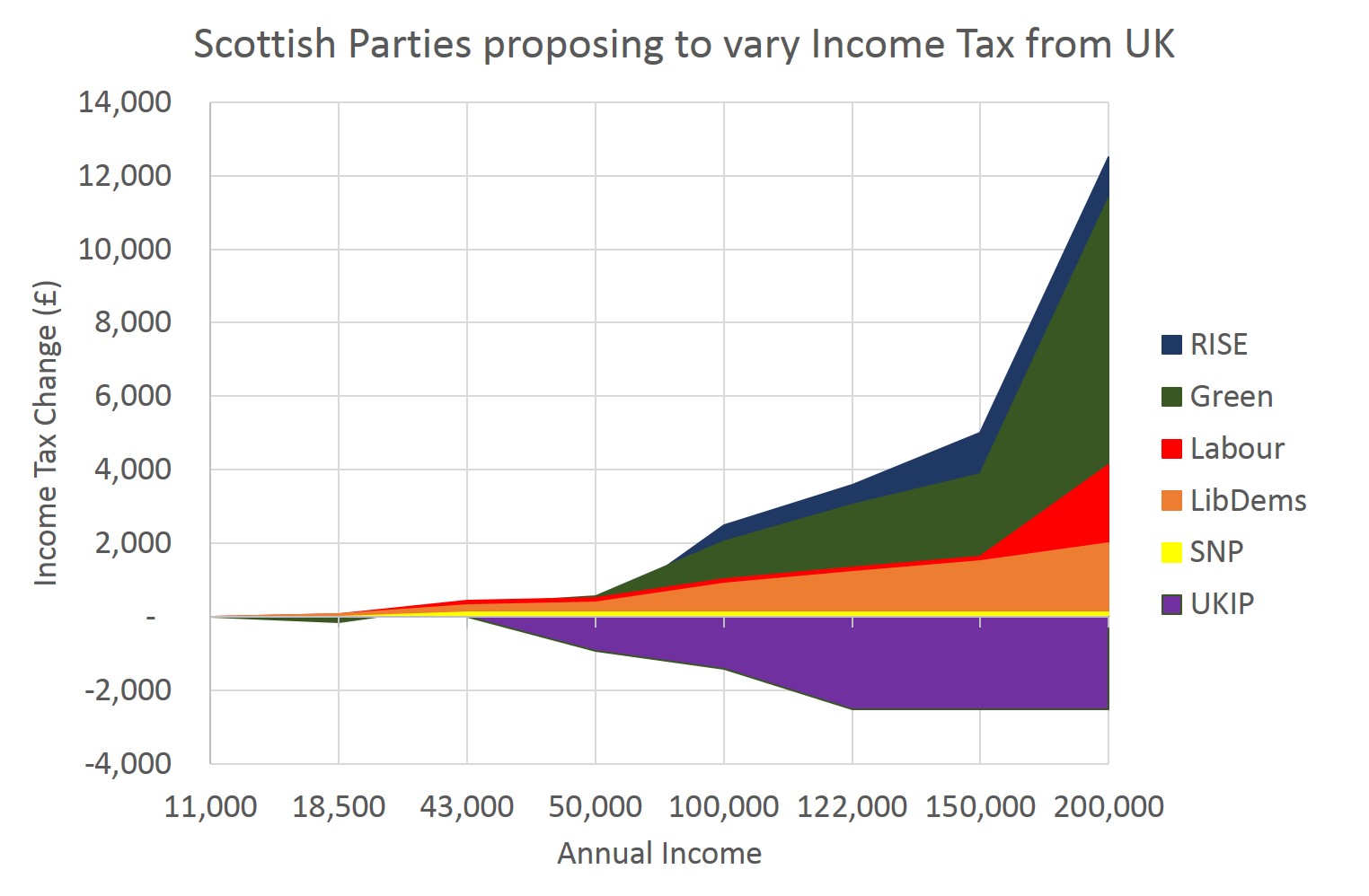 Only one of the parties standing in all regions proposes holding or dropping income taxes across all bands. UKIP sees a new 30% band (rather than 40%) for “middle income” tax payers, setting the bounds of this band as £45,300 and £55,000. Interestingly, it’s precisely this band that RISE targets for MORE taxation, where they propose a 45% rate for income above £50,000. Both parties claim their proposals are “fair”, which only goes to highlight just how subjective that word really is. Labour also uses the word “fair” to describe its plans for a 50% tax rate for the highest earners. Neither UKIP nor RISE can seriously hope for more than a handful of seats in the new parliament, but doubtless both parties will use any representation thy might achieve as a conduit for their respective brands of politics.

Although UKIP wants to lower income tax for middle-earners, and unsurprisingly the Conservatives, running the UK government, don’t propose anything different for Scotland, all other parties propose to raise more income tax than the UK rates provide. The <ahref=”http://moneyquestioner.co.uk/scotland/scottish-election-2016-scottish-national-party-manifesto/”>SNP only wants a very modest variation, however, by simply reversing the rise in the higher rate threshold. The increase was only £615 so a tax rate of 40% rather than 20% raises only £123 per person earning over £43,000. Labour also proposes retaining the £42,85 threshold.

Some just want a small increase

While the SNP proposes no more than £123 extra tax per year, Labour and LibDems propose adding 1% to all tax bands. This results in an additional £320 at the £43,000 level, and £890 for those with income of £100,000. Labour claims that this extra tax will avoid cuts in public services, while the LibDems want the extra tax to specifically pay for education.

Political parties are ideology-driven machines, who compute propositions like income tax structures according to their ideological DNA. So what is “fair” for one party is not fair for another. Consequently, voters will use their own beliefs and values to decide where their loyalties lie. I doubt many earning £200,000 will agree that it’s fair that they are taxed at 60% although those working 60 hours per week on minimum wage would see the problem very differently. Basically, there is no right answer, so the best I can do is to present the information as I see it.

If there’s one discourse that irks me when I read these manifestos it’s the use of the words “rich” and “wealthy” to describe those on higher incomes. For example RISE states:

It’s time for the rich to pay their fair share

The richest 1% will have to pay a bit more

curiously on the back of the Panama Papers story, which concerns offshore wealth not onshore earnings. The rich and wealthy as far as I can tell probably don’t often have a huge income, although they might have at some time in the past. And many earning around £50,000 are likely not to have much by way of wealth other than the equity in the family home. This is why I frequently blog about shifting taxation towards wealth and away from income. Land wealth in particular represents someone’s share in the maintenance of the country, although some might argue property wealth should also be taken into account. Either way I would like to see a separation of the use of the words income (or earnings – although not the same thing) and wealth.