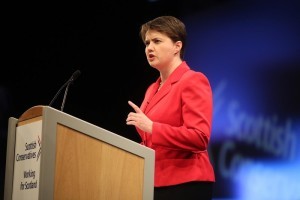 The manifesto majors on building a strong opposition to the expected SNP majority government especially in the following areas: education, health, anti-social behaviour, housebuilding and childcare.

In terms of tax-and-spend, and other areas of interest to this blog, we have:

Buried in the detail, we see that the Conservatives are advocating a move towards students paying tuition fees, currently financed by the Scottish government.

Setting the graduate contribution at £1,500 per year would
allow us to raise around £100 million by the end of the
Parliament and in the years after. We would keep exemptions
in place for part-time, postgraduate, disabled and low income
students and the contribution would not be payable until the
graduate is earning at least £20,000.

They also point out that there’s been too much of a shift towards academic courses and away from vocational ones, which they would like to see reversed.

Again, the point is made that more funding is required, to which the solution is to re-introduce prescription charges:

The abolition of prescription charges for those who
can afford them removed valuable funding from the
frontline of the health service. Gradually reintroducing
them would allow us to raise £65m by the end of the
Parliament to invest in nurses, health visitors or GPs as
well as improve access to new medicines.

The Scottish Conservatives support the replacement to Stamp Duty Land Tax, now known as LBTT in Scotland. They want to see the 5% threshold raised to £500,000 and concessions to landlords providing affordable rented properties. They are supportive of the UK government’s Help to Buy scheme.

The Scottish Conservatives oppose any rise in income tax over and above the current UK levels. They don’t want a drop in Air Passenger Duty, which has been proposed by the Scottish government, either.

Land reform has been an increasingly debated topic in Scotland. Possibly because a few people seem to own a lot of it, sometimes via offshore structures. The Scottish government are looking at radical reform, such as community buyouts.

There are elements
of the land reform agenda that Scottish Conservatives
have supported – improved transparency of land
ownership will help to tackle tax avoidance for example
– but we will continue to stand up against measures that
undermine individual property rights.

I was expecting a regurgitation of the UK government’s policies, and in some ways this has been evidenced but not to the extent I expected. The introduction of tuition fees (albeit at a lower level) and prescription charges would bring Scotland closer to the rest of the UK, and would be consistent with the party’s position on shoring up the union. While it’s admirable to see health and education promoted by any party, should it be paid for by those unfortunate enough to be unhealthy or in need of qualifications? They aren’t going for the illness-prone teen vote, clearly.

Keeping the levels of income tax consistent with the rest of the UK is admirable, as many other parties are looking to increase taxes. However I am disappointed that they support LBTT rather than a land value tax and that they believe the Help to Buy scheme is good use of public money.