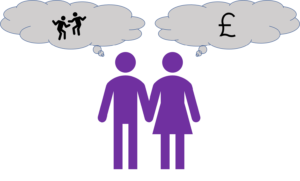 How do you manage money in a relationship? At first glance, it might seem easier than managing on your own with two incomes rather than one, but that doesn’t mean it’s always straightforward. What if your partner is frivolous, or too frugal? What if they earn half your salary?

Not to mention that sitting your partner down to talk about your mutual spending habits might not seem like the best way to keep the romance alive.

But with money worries being voted one of the top strains on relationships, could talking openly about finances with a partner help fend off future arguments?

A marriage or partnership frequently involves two people on different incomes paying a half share in their joint expenditure. This is a massive shift from my parents’ generation when the man, as the main wage earner, would run the finances, providing to his wife some weekly or monthly “housekeeping money”. Maybe some couples still do this? But most have a degree of financial independence, or equal access to a joint current account.

In the BBC’s story, Fay and Ben describe how their different incomes bring strain and stress into their relationship. For Fay, who earns the lesser of the two, this means deciding whether to make a fuss about who pays for the beers, many of which are drunk by Ben. For Ben, it’s about the pressure of feeling like he should be paying a greater proportion of the spending because he earns more.

Their saving ethics are different too, with Fay preferring to be more cautious than Ben.

But confrontations about money appear to have more to do with people’s own issues. In Fay’s case, it was her own lack of knowledge about budgeting that led her to project her fears onto Ben’s spending. And they both recognise they need to communicate more, without fear of a conversation turning into an argument.

One size fits all?

Every couple is different. While some might believe in financial independence, others might believe in share and share alike. Others still might believe one person should take on all financial responsibilities. So long as each couple mutually agrees what model they want, all should be well.

But what could possibly go wrong?

If it comes to a point when one person feels jealous, or resentful, or suspicious, or any other emotion that sets alarm bells ringing then that’s the time to review arrangements. Agreeing a budget or similar financial income/expenditure contract, is a great first step. Yes, it reduces flexibility. But it takes away the suspicions and, as with any contract, immediately identifies which one of the two has overspent, or underfunded or whatever. Put it in writing. And while it won’t always cover every event, it should provide that the couple decides what to do about unforeseen circumstances as and when they occur. If necessary, with help from someone as a mediator.

The moral of the story?

« Reflections on fossil fuel investments – 24 hours in Edinburgh
Are you an ethical investor or “greenwasher”? »