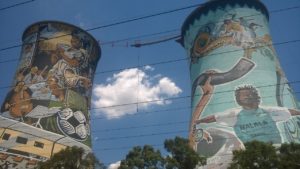 One of the advantages of living in Edinburgh is that we have a large number of festivals, the biggest of which is The Fringe. A corollary to that is that I have a steady flow of friends and relations coming to stay with us during August.

I spent yesterday with a friend who was recently involved with the protests arising from Extinction Rebellion, and we had two shows lined up dealing with connected themes. This has never been my bag, but I like being with enthusiastic people, so this was good.

“Tell me, Adrian. Am I mad to glue myself to the doors of oil company HQs?”

This was her question, and I had to think.

“I don’t know. Clearly it’s something you’re drawn to do. But will it really make a difference to carbon output or will it just create some noise in the media?”

“I have never connected with climate action. Yes, I do my thing. Recycling, re-usable cups, local produce etc. But climate science leaves me cold and there are plenty of people far more engaged than I’ll ever be. I see the problems through a different lens. An economic lens. I wonder just how sustainable our use of the world’s resources are, a question discussed in depth by Tim Jackson. I question whose assets these are anyway. And I ask what can we do about oppressive regimes which control the extraction and production of these key resources.”

The thing is, I despair at the response by asset owners in the UK, and in particular, the huge focus on divestment from holdings in fossil fuel extractor shares. I start to explain where I’m coming from, when my friend says

“Actually I own some BP shares. My mother gave them to me years ago and I’m embarrassed. I don’t want them and haven’t decided what to do.”

“You are in a perfect place”, I say. “You can go along to BP’s AGMs and make a nuisance of yourself. Join a shareholder action group of like-minded investors. Like the CIG, with whom I have been involved.”

I return to my rant.

“You see, the divestment agenda is very good at creating noise. Probably not as good as gluing yourself to BP’s HQ, but it’s been a successful campaign. However it’s ultimately a fail, and won’t prevent one thimbleful of oil being extracted. Besides, to whom are you going to sell your shares? Logic suggests that the buyer will be someone with fewer climate concerns that you. Perhaps a Russian oligarch or a state-owned oil company. At which point your influence as a shareholder is lost.”

“Besides, surely it’s not the extractors you should be targeting but the consumers. Extractors extract to meet demand. Target the demand and the extractors become less profitable”

“Precisely. I would love to say to investors: Don’t buy shares in BP – they’re a rubbish investment. Rather than: Don’t buy them because somehow you’re contributing to CO2 production, which you won’t be.”

CO2 from fossil fuels roughly splits three ways: transport, industry and commercial/domestic. Stereotypically that is seen as planes, steel and heating. But we should also include cars, trucks, ships, cement, other metals, domestic appliances and, perhaps less so in the UK, air conditioning. Even electric cars have to source their power from somewhere. And it’s no use deploying the get-out clauses which go: China burns more fossil fuels than any other country. And: The USA burns more fossil fuels per capita than we do. Because a steelworks in China is like a steelworks anywhere. An American driving 100 miles is like an Angolan driving 100 miles. Anyway, the point is to target climate campaigns against consumers.

My friend agrees with me and we talk about how, for different reasons, we hate flying. And how Greta Thunberg travels the world in a sailing vessel. (Will this catch on? Sell Eurotunnel shares?)

It’s 12:00. We set off for a show by a Canadian journalist called Sea Sick. I mean the show, not her name. Alanna tells stories about how she’s met with ocean scientists studying coral reefs and rising acidity in river estuaries. And how she blagged a ride in a submersible craft studying the ocean floor. She was a pleasure to hear and to meet after the show. Chatting in our little group was someone from Extinction Rebellion who mentioned divesting from fossil fuel shares. I couldn’t be bothered.

Back home now and my lodger had reported a bed bug loose in her room. My friend and I wanted to take the nuclear option with some highly toxic chemicals but my vegan lodger had already used some peppermint oil “which they don’t like”. OK, let’s give it a try then.

5.30pm. Now we’re going out to our second show, Climate Crisis. Sam Haygarth is a young man known to my friend because they were in court together, having shared the superglue experience. He’s one of the original Extinction Rebellion activists in the UK, having set up the London unit. They were mostly in Bristol before, apparently. The show was billed as comedy but while there was humour there, the USP was really that of listening to first-hand tales of a climate activist. This was his personal journey, one that threatened his relationship with his parents and left him feeling exhausted and exasperated.

He said after the show that he dropped a lot of the prepared jokes “because the audience seemed to be more serious than the previous day’s”. I suggested he stuck to his stories as there’s any number of comedians in Edinburgh just now and probably only one articulate climate activist with sticky fingers.

Those last 24 hours did one thing for me. And that was to write this article. It reminded me that one of my favourite words in my counselling alter ego is “empowerment”. For some this means being part of something that engages with your passion. For others it’s about doing something that totally aligns with your values, and that involves educating yourself, understanding yourself and learning from experience. And this is my entry back in to the divestment agenda. Because the logic “Too much carbon therefore sell fossil fuel shares” is weak at best. Anyone having oversight of a share portfolio, perhaps working for or with executive responsibility for a charity or pension fund, would do well not to blindly follow that line of logic but to empower themselves with the facts about what works and doesn’t work when bringing about change.

I recently stepped aside from my role in chairing investments for an organisation when they decided to take a path which I considered financially irresponsible with the sole aim of divesting from fossil fuel shares, and who knows what else once they form their ethical investment committee. Nevertheless, I am still in contact with them, though, and will continue to challenge their logic.

I personally believe that the divestment discourse will change to a shareholder activist discourse in the near future. When combined with political change and a reduction in demand, that deadly trio will start to impact CO2 emissions more than selling shares to climate agnostic investors ever will.

I recommend both Sea Sick and Climate Crisis to anyone who likes to hear good personal stories told well. You don’t have to know or even agree with their subject matter, but their passions keep you engaged for the hour or so they are on stage.

Adrian Tupper is a financial services professional, having worked in quantitative investing for 30 years, and for 12 years, a practising counsellor and supervisor.

« How do our values inform our investment decisions?
My partner earns 10k more – but we split everything 50/50 »