Pay by cash? Not for long, report warns 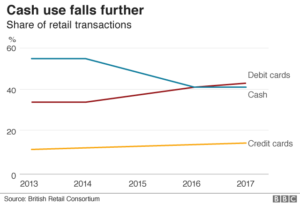 The system allowing people to use cash in the UK is at risk of “falling apart” and needs a new guarantee to ensure notes and coins can still be used.

A hard-hitting review by finance experts has concluded that market forces will not save cash for as long as people need it.

The report calls on the government and regulators to step in to ensure cash remains viable.

The report also said that essential services, such as utility and council bills, should still allow customers to pay in cash.

An independent body, funded by the banks, should be set up that would step in if local communities were running short of access to cash in shops and ATMs, the report said.

There are many reasons why we should keep cash. I discussed these in 2015 in the article: Can we be a Cashless Society?

Nothing has really changed. Briefly, notes and coins are an inconvenience to banks and businesses, who can process transactions effortlessly and immediately using electronic payment systems. Not to mention the cost to them of around £5bn per year to manage the cash system. The question for us consumers is: where is our money? Our debit card facilitates money transfer from our bank to the payee’s bank but do we want that transaction recorded? And do we actually want the bank to hold our money in the first place? Although the threat of negative interest rates has receded, the requirement that banks hold our cash in hand as a digital currency does leave us vulnerable to costs banks might one day impose.

If cash were to be phased out, what is to stop alternative systems taking its place? Cryptocurrencies are well-placed to fill a cash-shaped vacuum, at least for larger transactions as notes and coins don’t exist as such. For smaller transactions, local currencies or LETS can also fill the void, and schemes have started in a number of towns, usually in the south of England. An example is the Brixton Pound.

Given how long it’s taking to replace the cheque book, I don’t foresee any move to formally demise cash happening just yet. The BBC report goes on to describe how Sweden, acknowledged to be market leader in cashless transactions, has managed its move. And it’s essentially more about carrots than sticks, making alternative systems attractive to the consumer so that they use them as methods of choice.

While cryptocurrencies are trans-national (and not without their issues), and LETS are local, what might a national currency system look like in the 21st century? Positive Money suggests in “The Future of Cash” that we shouldn’t do away with cash, but we should have government-backed cash accounts which provide the benefits of the banking system but without the risks that commercial banks bring to the system. All adults would be guaranteed one of these accounts. Which? magazine has a campaign running to protect access to cash, and among other things, calls for a regulator. I believe it’s important that consumers don’t simply leave this to the government and its banking sector advisors to sort this out.

While coins and notes might not be the permanent solution, a regulated or decentralised alternative is far better for the consumer than reliance on the banking sector to provide solutions.