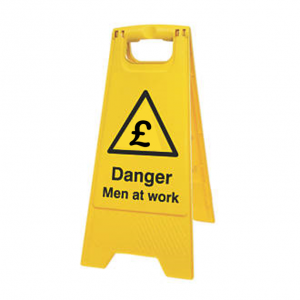 Matthew Taylor, whose report is out on Tuesday, said cash jobs such as window cleaning and decorating were worth up to £6bn a year, much of it untaxed.

The review recommends that firms which have a “controlling and supervisory” relationship with workers should pay a range of benefits.

That includes millions of pounds in National Insurance contributions.

The recommendations are part of a much wider review into modern working practices, including the gig economy.

Mr Taylor’s report recommends a new category of worker called a “dependent contractor”, who should be given extra protections by firms such as Uber and Deliveroo.

It also says low-paid workers should not be “stuck” at the minimum living wage or face insecurity.

There is much in the Taylor Report, but the part which stands out for me is the singling out of the “cash in hand economy” as a major problem with taxation. What he means is: the government can’t keep an eye on transactions involving anonymous cash rather than digital transactions with an audit trail. It’s widely acknowledged that tax evasion is endemic in some sectors. Who hasn’t paid cash for services like minor building works, house cleaning, child minding or decorating? The service providers should declare these payments as taxable income but it’s clear a large number don’t, or at least partially don’t.

So the report wants us to move to a cashless system of payments. Can we be a cashless society? Of course it’s possible. So long as technology keeps on working. But the proposition leads to all kinds of issues, of which I can immediately think of three.

If I choose to enter in to a transaction with another party, why should the government interfere with that? The proposition is that the state chooses how we execute these transactions, and the state has access to our whole transaction history to make sure we’re paying our taxes. This is the financial equivalent of having cameras watching us all the time because we’re all potentially going to commit criminal acts.

I may be sounding paranoid here, but is it worth it? We’ve coped for thousands of years without the need for such surveillance and just because we can now, does that mean we must?

I don’t believe so. The problems lie in the way our income tax system works in the first place (and VAT for e.g. building contractors). Employees on PAYE can’t escape it. Those in the cash in hand economy very often do. Wouldn’t it be better to change the basis of taxation rather than roll out a “big brother” payments ecosystem?

The discussion so far assumes that the national currency (pounds sterling in the UK) is used for transactions. If, say, I provide financial advice to a building company in return for some plastering work, how does that stack up in the world of income taxation? No money changes hands, but we both acknowledge privately that there’s about £200 of service changing hands. And if that’s OK, and acceptable to be free of tax, how about I don’t need plastering just yet, and the builder gives me some self-issued credit: “this voucher entitles the holder to one day of plastering work”? I could give or otherwise trade it with a third party? Perhaps getting some piano lessons in return for their getting a day of plastering. This is how the LETS systems work, only with LETS the credit is generic, and exchangeable with anyone willing to accept the notes/tokens. The point is, we’re still not touching pounds sterling and still avoiding (or perhaps evading) tax. We can be sure that as quickly as the government tries to lasso tax evaders, they will innovate their way out of it.

There is no way that the Taylor proposals can work without currency becoming digital and centralised. This might seem like a minor inconvenience, given that many transactions, and almost all large (legal) transactions are electronic anyway. However the point is that we would no longer be able to stuff money under the mattress. It would be accounted for in a bank, with all the risks associated with that. Yes, that bank might be something like National Savings, guaranteed by the UK Treasury. But even without credit risk to a commercial bank, what are the risks of keeping cash in a state-owned bank account?

The biggest risk, now thankfully receding, is that of negative interest rates. If money could be held as cash, then there would be no compulsion to subject one’s savings to negative interest rates. But without physical cash, it feels more like a savings tax. The proposals don’t explicitly state that there will be no cash. But forcing digital payments looks like the start of a process that will head quickly in that direction, starting with the demise of large denomination notes perhaps. And how many of us trust future governments to keep their hands of our savings?

The civil liberties piece is more of an ideological objection rather than a practical one. I am fairly tolerant of security cameras, speed cameras and other such measures. But I am wary of governments who want to exercise ever increasing degrees of control on our daily life, especially when security and safety aren’t the issue. It’s a mater of trust, I suppose.

For me the problems arising from the cash in hand economy seem to be that the tax system can’t cope with people rather than the other way round. In the middle ages, when the ruler wanted to raise taxes, he (usually it was he) would send soldiers into every village and force villagers to hand over coins, jewellery or even livestock. Income tax didn’t arrive in the UK till 1798 and the top rate was 10%. After that it came and went with political sentiment before becoming established during the 1914-18 war. So in it’s current form, it’s really quite a modern tax. And, presumably, collection rates have always been well short of 100%. So is it now time for a new tax paradigm?

I frequently argue for Land Value Tax, which taxes wealth rather than income. It’s unavoidable and it recognises that land occupation is granted by the state. However while that makes sense to pay for something like Universal Basic Income, as if everyone was a shareholder in the nation’s land, it makes less sense as a complete replacement for income tax. Another avenue might be to increase VAT. Although still avoidable, especially by the people who are being blamed for avoiding income tax and national insurance, it arises when money is spent by the individual. So the cash transaction effectively pays tax at the checkout rather than directly to the Inland Revenue.

Many small cash payments for work will be to people who probably wouldn’t earn enough to pay income tax anyway, such as baby sitters. And even if they would be earning enough for income tax, there will probably be a way they can deduct expenses to make sure they don’t. Far easier just to ignore this end of the problem. It’s when larger pieces of work are done, and the main contractor is handed over £1000 in cash to pay their own wages and that of their workers. It’s all under the tax radar. But should we change our money system to ensure these businesses can’t escape? And will the costs of doing so make it worthwhile as well as moral? I would like to see some more analysis on that from those responsible for implementing the Taylor Report.