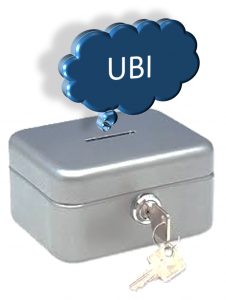 Universal Basic Income has been bubbling under the policy spotlight for a few years now. Here’s why it’s time is now.

Universal Basic Income (UBI) is a remarkably simple concept, that raises passionate objections as much as it raises informed support. Put simply, every national receives from their government a fixed amount of money each week or month. This amount of money does not vary with means, age or wealth. It really is universal. In fact there is a Universal Basic Income campaign group, which lists ten (eleven actually) reasons why UBI should be adopted. Let’s deal first with the objections.

Why UBI is a bad idea

The biggest objection is one which plays off that part of our psyche that resents us providing money deducted from work we do and gives it to those who don’t work. And it leads us to think that with UBI, nobody will want to work. Clearly that depends how generous the level of UBI is, but it nevertheless opens to door to a deteriorating will to work. Why is this? Consider at an election there are 10% unemployed. In the auction of promises that precedes the election, one or more parties state they will raise the level of UBI. They win, and a few more people decide they would rather spend “time with their families” rather than delivering pizzas and unemployment goes up to 15%. The pattern continues until UBI destroys hope of companies hiring low-paid workers, while those in work pay even more taxes to support the 15% (and rising). This can’t go on forever, of course, because the supply of money will dry up. But how bad does it have to get before workers and wealth creators decide enough is enough?

In a 2016 referendum, Swiss nationals rejected a UBI policy. The idea of raising taxes further to pay for this clearly did not appeal.

In the UK, no major party has adopted UBI as policy apart from the Green Party, who discuss how UBI might be implemented alongside other benefits and place a cost of the scheme at £321 billion. In other words, a lot of money. Even the Labour Party has tiptoed around UBI, with shadow chancellor John McDonnell championing UBI in September 2016 then almost never mentioning it again. The Labour Party is still examining the case for UBI but sees the same discourse against UBI going on: an opportunity for skivers to not do a hard day’s work.
Objections to UBI don’t just come from those who recoil at any socialist-inspired ideas. Indeed Milton Friedman was a fan of UBI, which means those who dislike neo-liberalism will find reasons not to like UBI either. Some say that UBI is a neo-liberal plot to make us poorer.

Why UBI is a good idea

Objections to UBI hinge on two related issues: cost and perverse incentive to not work. Actually these can be very simply mitigated.

On the cost side, the policy can be tax-neutral. In other words, while moving to a UBI system there will be winners and losers with regards personal taxation, overall the system can ensure that the P&L is unchanged. On the spend side, UBI would replace a large number of existing benefits: unemployment (in its various forms), working tax credits, even state pensions. It would also involve the lowering or the complete elimination of the personal allowance, where individuals only play income tax on income above a certain annual amount (currently £11,500 in the UK). This part is necessary otherwise those earning below the personal allowance basically benefit from negative taxation. On the tax side, tax rises will be required but then again taxpayers will receive UBI and on average will pay no more tax than they do currently. The losers at first glance will be higher earners, who will pay the brunt of UBI. But some adjustment in tax bands can offset that, such as a flattening of the progressive tax rates.

On the perverse incentive not to work, is that really any worse than we have at present? Arguably yes, because the main benefit today is Jobseeker’s Allowance, which is called that for a reason. On the other hand, whereas at present getting a job will mean a loss of benefits, under UBI it won’t. So work will always pay. In full. And should it matter to the rest of us if someone doesn’t want to work? If they can exist on a small income, which they will need to spend in the economy, then that small income will eventually work its way through the system to people with bigger incomes and will be once again subject to tax. UBI actually incentivises work rather than disincentivises it, through removing the welfare trap. Neo-liberal economist Milton Friedman had the US government entertaining UBI in the 1970s.

The cost saving for implementing UBI would be massive. Gone would be layers of administration, working out how much benefit people might be entitled to. Gone would be assessments for fitness to work. Tax and benefits would be combined into one system, so those avoiding the radar of HMRC won’t get UBI either.

One last reason for UBI – it gets rid of benefit fraud in one fell swoop.

In many science fiction movies, we see manual work and expertise performed by robots. It has been feared for many years that robots will eventually take “our jobs”. This caused Bill Gates, someone who we might at least partly blame or credit for the state of automation today, to start taxing robots. We can see his logic. A human job is replaced by a robot. That’s a net loss to the tax system. This is where UBI presents itself as an alternative. Rather than taxing robots, why not set up a system of tax and benefits that sees working people benefiting from the robot revolution? In fact it’s another technology magnate, Elon Musk, who proposes exactly that. Musk’s ideas seem more obvious to me, and Gates’ idea of taxing robots will lead to all kinds of problems. (Tax-avoiding robots anyone?)

I have suggested UBI on many occasions. Indeed one of my first blog posts proposed a flat tax and what’s basically UBI. I can understand why politicians are wary of it, though. Although it can be tax-neutral, it would appear to many that their taxes are rising, even if they are not. And people are suspicious of that (a future government might scrap UBI but not lower taxes). An alternative, related idea is negative income taxation (NIT), which arises from Austrian economics. The Adam Smith Institute compares and contrasts the two, coming down in favour of NIT.

If a political party wants a radical reform of tax and benefits, UBI is a great start. Any takers?

« UK General Election called for 8 June 2017
Think outside the money box: QE for the People (QE4P) »