Think outside the money box: QE for the People (QE4P) 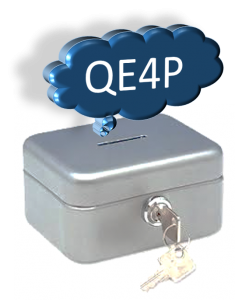 Quantitative Easing for the People, or QE4P for short, has come and gone from current political discourse

Quantitative Easing (QE) in its original form was a response to the liquidity crises of 2007-10. As supply of credit dried up, governments believed that printing more of it would kick-start the credit markets. So new money was created. Not physical money, but a kind of IOU from state treasuries to central banks which in turn used the money to but illiquid assets from commercial banks. These liquid assets were debt securities, including their own government debt. This gave banks cash they could, in turn, lend through debt markets.
What actually happened was that relatively little of this new money found its way into loans. Much of it was used to buy assets such as equities, forcing up the value of stock markets.
QE was always a bit of an experiment. And by the time the dust settled in 2012, the Bank of England estimated that in the UK 40% of the benefits of QE went to the wealthiest 5% of the people. After £375 billion of new money creation, the benefits of QE were questionable at best.

QE4P – an alternative to QE

The 2012 analysis led some to suggest that if there is going to be any QE at all, it should skip the financial system and go straight to assets or even cash that everybody can use. This gave rise to QE for the People, or QE4P. In its various forms, it could be used for infrastructure spending, as favoured by the UK Labour Party (although that’s gone rather quiet of late). Or it could be handed out as “Helicopter Money”, as proposed by Milton Friedman. QE4P therefore has its fans across the political spectrum.

It sounds too good to be true. And we can therefore assume it probably is. Let’s consider what happens.

All forms of QE are essentially currency debasement. There’s no Magic Money Tree. The wealth of the nation doesn’t change. It’s just divided up into smaller pieces. This is really no different from rulers of old declaring that gold coinage with an increased amount of copper is to be the new legal tender. The gold saved would be used for wars or for the ruler’s own pleasure. QE4Wars, if you like. For holders of the new coinage – or the money in our bank accounts in the 21st century – the result is inflation. With QE, it was asset inflation, especially equities and property. Not because they go up in price, but because the currency being used to value them depreciates. Former Bank of England economist Tony Yates concurs, also pointing out that the Bank of England’s supervisory role in setting monetary policy would be compromised. Similar arguments abound in the USA regarding Helicopter Money.

QE4P therefore isn’t magic money. As Prof Steve Keen describes, it’s a sly form of taxation, paid for through inflation, and felt by those with more cash than less. Which isn’t necessarily a bad thing, it just depends on your views on monetary policy.

The UK Labour Party’s suggestion of a National Investment Bank created with £500bn of QE4P money is a seductive one, despite giving central bankers the heebie-jeebies. The question being begged, though, is: Why can’t this bank be set up with government debt? Well, with government debt, interest repayments mean that taxes will need to increase, all other things being equal, to fund the payments. Optimists suggest that the new bank will help generate new tax revenues and will be self-financing. But pessimists see it as an enterprise out of control from the Bank of England, and as it lends its new money, the new money supply will cause inflation. However for many people, who have seen their incomes fall and standard of living fall, they might think there is little to lose.

I tend to be on the favourable side of QE4P. Not because it should be done, but if the economy needs a stimulus, it seems to benefit more people than old-school QE or dropping interest rates.

I wouldn’t rush to create a new investment bank out of QE4P but I wouldn’t advocate using QE again for the financial markets either.