Taxation doesn’t have to be complicated 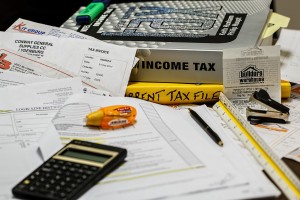 It’s the end of Budget day here in the UK, and nobody really expected George to do anything imaginative with personal taxation, and indeed he didn’t. Yet during their tenure, every chancellor at some point fiddles around with tax bands resulting in winners and losers. Ten years ago, George Osborne spoke out for a flat tax rate, but he’s said nothing about it of late. If we had a fresh start on taxes, without worrying about whether any particular part of society is going to be better or worse off after a change, then what system would emerge?

Here’s my thinking based on first principles. First, it’s right that those who have more money should pay more tax. The rationale is simply that they have more to lose as a result of overall spending cuts. We know that the police spend more resources tracking down a stolen masterpiece from a country mansion than they would tracking down my stolen mountain bike. And we can extend that argument to defence too, because those with a lot to lose will certainly want their assets protected much more than those with nothing, who indeed might even be on the opposing side if there’s a revolution going on. We might argue that social spending and education spending do not benefit the well off as much as those on lower or no income. The Victorians, however, recognised that an educated population was good for business.

Where I suppose I deviate from much modern thinking is that I see merit in a single, or flat, tax rate. Why shouldn’t someone on minimum wage pay tax? And why should someone earning a lot pay proportionately more tax? After all, both have an equal say in how it’s spent. Similarly, when it comes to benefits, why do we have this recent move towards means-testing benefits, resulting in effectively a further steepening of the tax rate, not to mention inviting even more fraud and deception than we already have?

Let me propose this. It’s so simple it can be expressed in two lines. Everyone pays a flat rate of tax. Everyone receives the same amount of benefit. The devil of course is in the detail. Let’s assume everyone pays 30% tax on their income, and everyone receives the equivalent of some amount less than the minimum wage back again. There will be a level of personal income at which the money paid in tax and the money received in benefits will balance out, depending on the numbers used. Above that amount the person is a net payer of tax and below that amount they are a net receiver of benefits. As an aside, universal benefits will remove benefit fraud overnight!

I suspect those of a more left-wing orientation will criticise my proposal because the well-off will be even richer than they are already. Well, that’s true. But let’s drop two more things into the equation. First, the amount of tax gathered from the super-rich isn’t very much anyway, and we might like to wonder exactly why we think we should extract proportionately more tax from rich people than poorer people. Second, why are we not taxing assets (other than my savings account)? Further to my initial suggestion that those who have, have more to lose, then does it not follow that those who have wealth should be paying tax on that too? This idea has rattled around parliament in recent years in the form of a “mansion tax” but nothing has yet crystallised. But with the justification of a flat rate of tax made, it follows that some kind of tax on assets can be justified.

So there we have it. Flat tax rate, universal benefit and a tax on assets. What’s the catch?

« How to really invest for retirement
Does money have memory? »