Does money have memory? 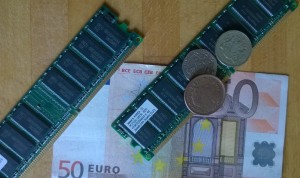 A couple of years ago, in a small town I had never visited before, nor since, I found myself in a charity shop. A bought a jacket I liked. It appeared to be new, it was the right size, and it was the kind of jacket I’d been browsing the shops for anyway. At a cost of £25, my wife remarked that it’s rather a lot of money for something from a charity shop. But to me it seemed like good value. Out of curiosity, I googled the jacket and found it retailing for nearly £300.

Now, how much is that jacket worth?

It’s tempting to believe that as it cost me only £25 then it’s only worth £25, and if anything happens to it then I’ve only lost £25. There can also be a persuasive argument that to replace that exact same jacket would cost me as much as £300. A more pragmatic assessment might suggest that I could have put that jacket on ebay and sold if for maybe £100. Therefore, it’s worth £100.

Investments play with the mind in the same way. Even experienced investors have been known to say “I’m not selling those shares at £5 when I paid £7 for them”, presumably suggesting that if they’d paid £3 for them then they would have no hesitation cashing in their investments. An experiment some years ago saw a number of portfolio managers given either an existing portfolio or an equivalent amount of cash, and asked to recommend to the investor what to hold for a particular outcome. Those given the cash to invest recommended fairly similar portfolios. Those given a basket of investments recommended portfolios which appeared to have large similarities with the the baskets they were first shown. The experiment concluded that even an experienced professional can have their objectivity compromised by the history of the problem they are asked to solve.

The recent trend in “smart beta” investing attempts to isolate characteristics of investments (usually shares) and use those characteristics to decide how much to invest into each one. Studies have shown that there exists a “momentum factor” (Jegadeesh and Titman) whereby a share whose price has tended to increase over recent history is more likely than not to carry on increasing, and likewise a falling share price is likely to continue falling. Indeed MSCI has a series of Momentum Indices which aim to capture the effect, and form the basis of investment products. Conversely Research Affiliates’ Jason Hsu demonstrates that there is a different, almost opposite effect in play. Here, we see evidence that there is some kind of mean-reversion going on, meaning that it’s a poor strategy to buy increasing quantities of shares whose prices are rising while offloading shares whose prices are falling. He suggests that monkeys throwing darts to select investments can show performance over an index if investments in outperforming shares are periodically trimmed and invested into underperforming investments. The two studies don’t contradict each other as much as I seem to be suggesting, indeed the strategies can even been combined, but both show in their own ways that money has some kind of memory that is not just fantasy on the part of the investor. The trouble is, as Sir Dave Brailsford might say, the measured effect is “the sum of marginal gains”. So for any single investment, neither the momentum effect nor the mean reversion effect would be identifiable but averaged over perhaps 1000 investments, it is.

So for most of us, with only a handful of investments at best, we can probably ignore what academics in the world of financial analysis might have to say about momentum or mean reversion. A share worth £5 in the market couldn’t care whether you paid £3 for it or £7. That price reflects only its future prospects. In the same way, my jacket couldn’t care that I paid £25 for it and you paid £300 for something identical. We will both be selling them for £100 on ebay.

« Taxation doesn’t have to be complicated
Deflation- what’s so bad about it? »