Can we be a Cashless Society? 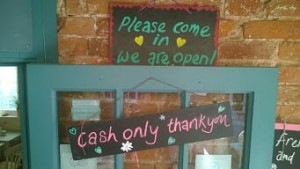 With more and more media attention about a cashless society, we look at the issues

A payment system which is purely electronic sounds like a logical next step in the evolution of money. However there are pros and cons to becoming a cashless society.

Convenience must surely be high on the list of pros, although for some too much convenience might mean too much spending. In some countries, notably Iceland and Scandinavian countries, cash is already behind card, even for small payments. In Denmark, the requirement that a retailer is obliged to accept cash if it is offered has been phased out in some sectors. This means retailers can choose to go cashless if it suits them. Cashless banks also exist in Denmark, making armed bank robbery a thing of the past.

We have all probably experienced inconveniences when ATMs are out of action, perhaps even a power glitch somewhere in the bank’s circuitry. What would happen if whole networks of payment systems fail or even if a card reader fails to power up in a filling station?

Bank security issues moved from violent robbery to sophisticated compromising of a bank’s IT systems. Gaining access to someone’s cash on the street is no longer as simple as stealing their purse. And shops need not have cash on their premises at any time either, making them safer for staff. However cyber crime is already well established, and hacking into bank accounts will continue as the stakes become higher. Maybe there will even be nationally sanctioned cyber attacks to bring down another country’s economy.

It’s not just criminals who want to launder cash without trace. How would any of us feel about every transaction we make being recorded somewhere? No amount of reassurance will leave us believing that such data will never be scrutinised. We only need look at Snowden’s revelations about snooping to confirm what we already suspected. With cash, there is no linkage between the person and the purchase. Should electronic transaction records concern us honest law-abiding people? I would argue: Yes. We simply do not know how that data may be used. We might be framed for a crime. Or like the journalists who hacked people’s phones in the UK, we might find our private life becomes public. Or donations to political or subversive causes might be identified, even 50 years into the future when society’s values as to what is right and wrong have progressed. Paranoid? Perhaps, but not irrationally so.

We are currently battling against deflation, and the usual weapon of lowering interest rates has been largely immobilised because rates are very close to zero. In theory they can fall below zero, and indeed they are already below zero for interbank borrowing in some countries.
An interesting chart showing the interest rate to best tackle the US economic crisis against the actual rate appeared recently in research from Citi. 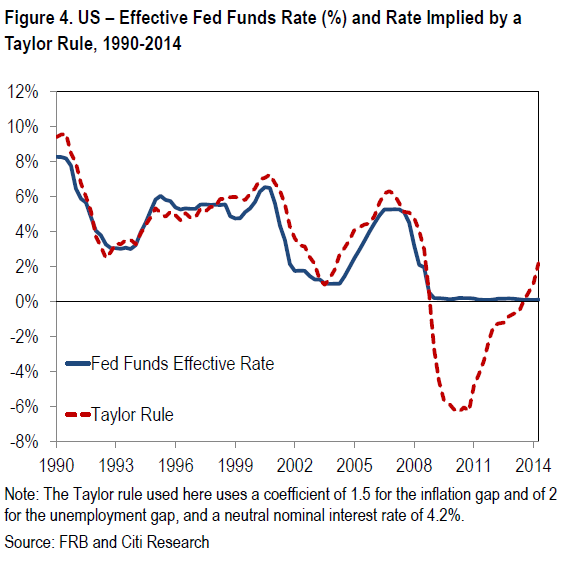 It is clear that if setting a negative interest rate were practicable, then the Federal Reserve, and by implication national reserve banks around the world, would have done so. But consider what would happen if interest rates were negative? Would you “save”? No, because rather than receiving interest on savings, your savings would depreciate. You would, metaphorically or literally, put your cash under the mattress instead.

Economists have thought about this, however. And they have a solution. The solution is to abolish cash! By making currency digital-only, there is nowhere for it to hide and banks would deduct interest on any amounts on their books. Citi’s Willem Buiter acknowledges there would be problems driving a cashless society package through with popular support for all the reasons in this post and doubtless more besides.

It would take a really oppressive government to totally outlaw transactions in anything other than the national currency. But even without such a ruling, taxes will still have to be paid in the currency, so people will still need to convert their wealth into that currency somehow.

If, say, the Euro became cashless then why shouldn’t people use the US dollar instead? Why not indeed? And for this reason, it is unlikely that any government can take total control of people’s transactions without cooperation from other countries, all of which must also be cashless societies.

There is also the emergence of LETS, local currencies issued by and used by people in a neighbourhood to pay for local goods and services. Hard to see babysitters and homework tutors going round with payment machines.

Finally truly digital currencies like Bitcoin offer an alternative way to carry wealth. Bitcoin is designed to be anonymous and independent of banks. Its value, however fluctuates considerably against national currencies and it isn’t without its own security issues either.

The implication of a cashless society is that currency is held by banks rather than exchanged as cash and that everybody will need to have a bank account. Although it’s true that almost all adults do have bank accounts, many children don’t and neither do homeless people and others who live largely hand-to-mouth. Do we want a cashless society that discriminates in this way? A way through this might be some kind of currency card that might work like a phonecard (anyone remember those?) or a pre-paid SIM. But isn’t that just another form of cash?

Is it going to happen?

Not yet. Some say a cashless society will become real by 2030 in some countries, like Iceland or Denmark. But there doesn’t seem to be the political will elsewhere. In the USA, libertarians and Tea Party aficionados already harbour suspicions about the Federal Reserve and their government’s interference in the value of the dollar. To then try to sell them a system which states that even those dollars of doubtful provenance must exist in digital form in a commercial bank’s computer would be at least one step too far.

« Money for Nothing – 30 years on
Ethical Investments and Ethical Consumerism »