Money for Nothing – 30 years on 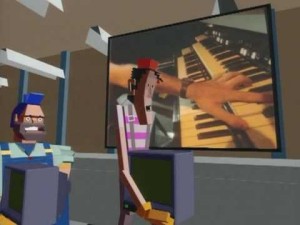 In May 1985 Dire Straits released the album Brothers in Arms, with the single Money for Nothing coming out in June 1985

Money for Nothing famously started with an intro melody sung by Sting, with Knopfler coming in with the now familiar ZZ Top – styled guitar riff. The lyrics were allegedly scribbled by Knopfler after overhearing a number of pontifications by a guy working in a TV shop. In short, the Money for Nothing theme centres on the way a rock band can get money for nothing, just by brandishing guitars and banging drums.

Ronald Reagan had won a landslide and had started his second term. Mikhail Gorbachev had just been “elected” head of the Soviet Union. Margaret Thatcher appeared invincible in the UK, embarking on one privatisation of state-owned corporation after another while the 80s financial boom was in full flow.

We hadn’t quite got to Gordon “Greed is Good” Gecko, but we were kind of aware that people like that existed in the ivory towers of Wall Street.

In the entertainment world, CDs were replacing vinyl and cassette tape. DVDs were still some way off but home video players had arrived with two competing major formats which eventually saw VHS triumph over Betamax. If you were listing to big budget rock or pop music, your collection probably included Bruce Springsteen, Bryan Adams, Phil Collins or Dire Straits. Money for Nothing epitomised the sound and production style of 1985.

It was also about money.

Social implications of Money for Nothing

In some ways, Money for Nothing represents a dream. Like winning the lottery, or being granted three wishes. But the implication in the song is that it is somehow wrong for people to get money for nothing. Whilst not (as far as we know) Mark Knopfler’s own opinion, it was the opinion of the TV store worker who he heard ranting the words which then became the lyrics.

Dire Straits weren’t known for politically charged lyrics yet in that period there were a number of singers and entertainers who aligned themselves with an anti-capitalist agenda against the rise and perceived excesses of capitalism. This was the era of Band Aid/Live Aid, after all. Any connection between Money for Nothing and socialism did not stop the song getting to number one in the USA, however.

Ethical implications of Money for Nothing

It is interesting that the concept of money for nothing is deemed wrongful, at least under certain circumstances, under Mosaic Law.

You must not lend them money at interest or sell them food at a profit.
Leviticus 25:37

That is but one example. We would expect the ethics of money for nothing to have filtered into modern Western thinking. But it seems to have been lost somewhere over the ages and both taking money as interest (usury) and profiteering with food is acceptable. Sharia Law is stricter on these matters, it must be said.

Free market thinkers won’t have a problem with money being made for “nothing”. Marxism, unsurprisingly, disagrees and equates excesses with poverty elsewhere.

Thirty years on, we are still in the Money for Nothing era. Financiers still make millions, as do rock stars. The anti-capitalist groups are as strong as ever too.

We have had a financial crisis which saw banks disappear or wobble on the brink. We have created more money in our economies to combat deflationary pressures.

This year’s general election in the UK returned a Conservative government and a possible return to the Margaret Thatcher era of national economic management. It seems that while for some, money for nothing is plain wrong, for many others, it is OK.

« How will the Conservative Government find £12bn of benefits cuts?
Can we be a Cashless Society? »