Bitcoin – nearly as valuable as gold 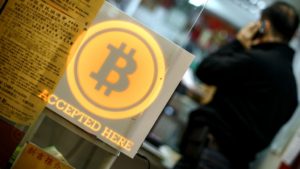 Can the world’s top currency make it three in a row in 2017?

Here’s a bit of financial trivia for you – what do you reckon has been the best-performing currency (against the dollar) over the last two years?

The Brazilian real? Did great last year, but not the year before.

The haven that is the Swiss franc? Nope.

The pound? OK, now I’m just having a laugh.

No, it was bitcoin…

Bitcoin has enjoyed success in recent years mostly from users based in jurisdictions with restricted currency markets. Estimates suggest Chinese nationals are responsible for 90% of trading.

I have written about Bitcoin before. It’s an enigma. It shouldn’t really exist, or need to exist. Yet it does. But how do you value it against gold, for example? And is it really a currency at all? Well, it doesn’t look like it’s going away.

Bitcoin only continues to exist because it exists already. OK, that doesn’t explain how it came into existence in the first place, but let’s assume it’s always been around. So there’s a number in cyberspace that tells me how much Bitcoin I get for my Chinese Yuan. And at that moment in time, using the CNY/USD exchange rate, my counterpart knows how many US dollars he will get for the Bitcoin I’ve just sent him. The actual exchange rate will have moved up or down a little by the time he unwinds the transaction, as with any currency. It’s purely supply and demand that drives that. If there are more people like me than like my counterpart, then the value of Bitcoin goes up. If people want to liquidate their stashes of Bitcoin, then it goes down. Just like gold, which is the idea behind this virtual version of the yellow stuff.

Stepek’s article suggests Bitcoin will trade higher still in 2017. Perhaps because currency markets look like they are becoming less liberal than more so. India’s removal of higher denomination notes is an example of this. On the other hand, if China liberalises its Yuan markets, then demand from that country will fall and take Bitcoin with it.

I still don’t totally buy in to Bitcoin. It’s a bit of a con, surely? Pun intended. But then again, gold is only worth what we say it’s worth.

« Greg Lake tribute: What a Lucky Man he was
Shares and bonds for long term investing – a short critique »