Shares and bonds for long term investing – a short critique 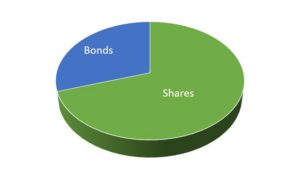 An investment advisor will typically propose a mix of shares and bonds for your portfolio, but how do we know what the mix should be?

It has been a long-accepted truth that a portfolio of shares and bonds, in some proportion, can be tailored to meet our investment needs. Investing for the longer term typically means a higher proportion of shares. Shorter term investments will see a higher value of the lest risky bonds. Very short term investments would likely be in cash.

In fact a typical portfolio, say for retirement, with ten or more years to run will start with a high proportion of shares then, as the retirement date approaches, exposure to shares will be reduced and exposure to bonds increased. This is sometimes called the “flight path”, because the the decrease in risk with time, when charted, looks like that of a plane coming in to land. This approach might appear intuitively correct, but the mathematics is far from simple. In fact, I would argue, it might even be contradictory.

If you could only invest in shares or bonds, not both

If you has just two assets – say an equity find and a bond fund – available to you, and you had to choose one or the other, which would you choose? A long term investor will likely choose the equity (share) fund but the short term investor would choose the bond fund. The risk of losing money over the long term with shares is small, but as the time horizon goes to zero, the probability of losing money approaches a value just above 50%. Put simply, it’s not wroth the risk. But what happens if you are allowed to switch?

If our long term investor is allowed to switch from shares to bonds, when would be the best time? We might argue that there will be a time when the risk is too great to continue holding shares as retirement approaches, and we switch into bonds. This might be something like five years before retirement. So for a 45 year old retiring at 65, they would hold shares until the age of 60 then bonds for the five years before retiring.

Well, yes and no. Statistically that’s exactly the same as holding bonds for five years followed by holding equities for fifteen years, right up to retirement. And it’s statistically equivalent to maintaining 75%/25% equity/bond mix throughout the whole 20 years. Intuitively the first option sounds less risky, but the other two in fact give statistically the same outcomes.

Yes, it’s counter-intuitive. Especially if you consider a long-term investor for retirement holding a 75/25 portfolio at age 60 while another who is investing a lump sum (say, from downsizing their home) will avoid holding shares completely. Why should it make a difference whether one has been investing for 15 years while the other has just started?

The answer is probably along the lines of the law of averages, or of mean reversion. The long term investor may be above or below their target at age 60. If they are above, they might well decide to cash in the equities rather than risk a downturn. If they are below then they might take the view that they’ve had a run of bad luck which must change sooner or later, in which case they should stay invested. However neither of these notions is based on anything other than the human belief that runs of good luck or bad luck must come to an end. The successful investor might be justified in taking their profits if they have reached their target. Why be greedy? But the unlucky investor cannot assume that their run of bad luck will come to an end. Taking losses is sometimes the hardest thing for an investor to do, and the last thing someone in that position should consider is increasing their risk because of a false belief that their shares will finally deliver. Anyone who believes they can’t predict what a flip of the coin will deliver after having seen ten previous flips will know what I mean.

It’s easy to knock perceived wisdom, but harder to replace that with something acknowledged to be better. Although I have misgivings about conventional advise on portfolio allocation, I accept that it would be hard to convince someone who has been investing till age 64 to do anything other than move into very safe investments. And one thing I haven’t factored into this simple analysis is that over a long period of time, there is scope for doing something about a poorly performing portfolio, such as contributing more or delaying retirement. But so much investment advice still relies on putting clients into general equity and bond funds, often heavily weighted to shares and bonds issued from companies trading in our own country.

What I do suggest, however, is to take your investment advisor to task on this. As them who told them that the “flight path” approach is the best and why. Whenever I have done this, the only answer I ever get is that it’s what everyone does. And if I were an investment advisor, and I advised my clients to do something different from the crowd, what would I say to them if my advice turned out to result in below average returns?

In keeping with the recent global discourse on “take back control”, the best we can do, I believe, is to educate ourselves about investments and what our goals are. It’s too simple to say: I just want good returns. In fact it’s too simple just to think in terms of measuring returns in our own local currency. Because that doesn’t take into account inflation in goods and services on which you will depend in time to come. Think of it more as saving for the things you want and selecting investments which are appropriate for that (please see the linked article). Most of all, don’t blindly accept advice that appears to come from the one-hat-fits-all approach to investing. You might just end up suffering with everyone else.

« Bitcoin – nearly as valuable as gold
May Pledges Vote on Brexit Taking U.K. Out Of EU’s Single Market »