May Pledges Vote on Brexit Taking U.K. Out Of EU’s Single Market 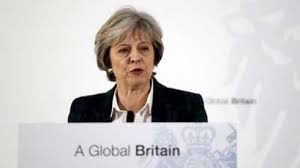 Prime Minister Theresa May pledged to pull Britain out of the European Union’s single market while seeking a new arrangement on the customs union, saying the U.K. parliament will get a vote on the final Brexit deal.

Giving her most explicit outline yet of her vision of Britain post-Brexit and how she wants to get there, May said that she was confident a deal can be reached with the EU that avoids disruption to business. With the trigger to quit the bloc due to be invoked by the end of March, May called for a “phased approach” to implementing the new rules that will seek “a smooth and orderly Brexit.”

The pound climbed against the dollar and was set for its biggest advance since the global crisis as May laid out her plans in a speech to diplomats in London that was broadcast live in European countries including Germany.

May offered a series of red lines for the coming talks:
* “What I’m proposing can’t mean membership of the single market.” Staying in the single market “would mean to all intents and purposes not leaving the EU at all”
* “I do want us to have a customs agreement with the EU. I want Britain to be free to reach our own tariff schedules at the WTO”
* She said she wants to be able to negotiate new trade deals
* She wants transitional arrangements for financial services
* No more “huge” U.K. contributions to the EU budget

These are interesting. It looks like the UK wants to have its cake and eat it, a response echoed by opposition leader Jeremy Corbyn today. Currently the UK cannot negotiate trade deals with other countries. Nor can it avoid “huge” contributions to the EU. Whether the EU can accept that the UK can be part of the customs union while having these freedoms is far from certain. This is the initial negotiating position.

The fact that the pound climbed against the dollar, and more importantly against the Euro, suggests that there’s enough here to give confidence to the markets that the shock to the UK economy is lower than feared. Why would this be? Likely it’s because the UK Parliament will be given a vote on any final Brexit deal. A majority of MPs are thought to be against Brexit, although many of those accept that the 2016 referendum means Brexit has to be delivered. But that doesn’t mean they will also usher in an isolationist/protectionist UK. The Brexit deal must therefore satisfy enough of these MPs to get through parliament.

The Conservative Party itself is key to the outcome. Some like former leader Iain Duncan Smith still advocate a “hard” Brexit, as seen as recently as this morning. And the main opposition Labour Party has a range of views. While its leader still favours the Single Market, complete with free movement of goods, services, capital and people, a growing number of MPs and members believe it’s time to curb immigration thus precluding entry to it.

While there is much in the speech to keep MPs onside, in the belief that they can influence the outcome of the Brexit package with amendments etc, some quarters will likely feel hardened against the government. None more so than the Scottish Nationalist Party, which has been clear about its intention to keep Scotland in the EU, or at least the Single Market, following Brexit even if that means independence.

The reference to “transitional arrangements for financial services” is an attempt to placate the City. But is this enough? Financial companies warned earlier today that they are prepared to leave London if the UK goes down a Hard Brexit route. Theresa May may have prevented a run for the door but perhaps not a more orderly evacuation.

Finally, there is the Utopian carrot of trade deals. Clearly a trade deal with the EU is on the wish list, and incoming US president Donald Trump is signaling a USA-UK trade deal is a real possibility, such deals are notoriously time consuming to negotiate, and the USA prefers a TTIP-style of trade deal which controversially places corporate interests above democracy to oil the wheels of trade.

I still believe the UK would have been safer inside the EU than outside of it. The problems Brexit is intended to solve aren’t especially major ones. And if any became major, what would the EU do if the UK government decided to unilaterally take a different approach? What we have instead is uncertainty.

The speech was clearly very carefully put together, keeping many doors open and delaying any decision other than to serve the Brexit notice (Article 50) until negotiations have run their course. If the government fails to deliver a Brexit package that the UK Parliament can approve, a General Election will likely follow. And in that period, the ruling Conservative Party’s biggest enemy will be itself, with factional in-fighting like in the 1990s. Ironically its biggest saviour is likely to be the opposition Labour Party, which also can’t agree with itself. The Liberal Democrats, recovering from an electoral meltdown in 2015, and the SNP are pro-EU and will likely do well in the next few years should the major party vote fragment.

Meantime, keep a watch on the exchange rate. It’s the nearest thing we have to knowing where the economy is going.