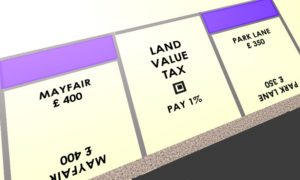 Land Value Tax is starting to gain traction, but should you believe all the criticisms of it?

As with all new ideas, some will attempt to abort Land Value Tax (LVT) before birth, none so more than the Conservative Party. Despite being championed by economists as diverse as Milton Friedman, Henry George and Joseph Stiglitz, LVT has never had a comfortable place on the political spectrum, with many assuming it’s a product of the opposite side. To illustrate this, land reform campaigner and Scottish Green party MSP Andy Wightman channels Winston Churchill in his paper on LVT which is well worth a read.

The landlord who happened to own a plot of land on the outskirts or at the centre of one of our great cities …. sits still and does nothing. Roads are made, streets are made, railway services are improved, electric light turns night into day, electric trams glide swiftly to and fro, water is brought from reservoirs a hundred miles off in the mountains – and all the while the landlord sits still… To not one of these improvements does the land monopolist as a land monopolist contribute, and yet by every one of them the value of his land is sensibly enhanced.

So here are seven ways people have mis-represented LVT, along with some clarification from me.

1. Why should I have to pay tax on money that’s already been taxed?

We’re so used to thinking of tax as income tax, we sometimes forget that it’s not money that’s being taxed but people. Besides many taxes double-up. Our taxed income also pays VAT, for example.
But why should tax be concentrated on income? Why not on wealth – a more true measure of ability to pay? LVT only partly represents a person’s wealth but there are good reasons why it’s promoted as a proxy, notably that it’s the part of an owner’s wealth than can’t be moved away from the national jurisdiction. It’s worth pointing out that LVT shouldn’t be thought of as some kind of sneaky additional piece of taxation. Its introduction should be tax neutral, thereby leading to cuts elsewhere (such as lowering income tax).

The “garden tax” label was quickly introduced by those opposing UK Labour’s passing mention of LVT in their 2017 manifesto, in particular the right wing press with articles like this, based on Conservative Party spin. And perhaps Labour’s ideas will lead to little more than a revamped council tax, where the price or rental value of the property is included. The IEA, on the other hand, propose starting LVT on non-residential property, thereby encouraging more business-efficient use of land. While it’s hard to get away from some kind of proportionality between size of land and tax paid, gardens are “unimproved land” and therefore don’t attract the same value as similarly sized plots with houses on them. Put differently, two identical houses in the same street with different sized gardens are likely to command similar sale prices. However if you get permission to build a second house in your garden, expect to pay more LVT!

3. It’s another tax on the rich

For a number of people, this might be a positive. But a lot depends on government policy. My own preference is for something like a flat rate of income tax plus LVT, getting rid of stamp duty too (a peculiar UK tax on moving home). This means the emphasis is not so much on taxing high income but on high wealth, particularly land wealth which was labelled by economist David Ricardo “that portion of the produce of the earth which is paid to the landlord for the use of the original and indestructible powers of the soil”. So yes, a tax on the rich, but only those who are rich because of rising land prices, in turn attributable to improvements to the surrounding areas, not through the fruits of their own labour. Governments can progressively tax high earners or it can fairly tax the wealthy. Be suspicious if your government wants to tax both.

4. It’s complicated to administer, and easy to avoid

Let’s bust the second first. Of all taxes, it’s probably the most difficult to avoid. For every square metre of land, there will (if the will is there) be a tax charge. Whether than land is a hotel, a country estate, a church, a hill, a rock, a road or a park. State-owned land will likely be exempt as the state can hardly tax itself. But there will be a notional LVT arising, perhaps encouraging governments too, to make better use of land or, indeed, sell land attracting high LVT. Farms might require special treatment too, given how land-intensive they are. But given farm land is cheap compared to residential land, that may not be an issue. Unless as one commentator points out, you might be growing turnips in Surrey.

With modern tools and techniques, and I’m thinking of Google Maps here, it should be easy enough to assign every square metre of land to an owner and to put a value on it. Yes, there will be approximations and miscalculations, there always is with tax, but regardless of whether the owner is an individual, a business or an offshore trust, all will have to pay.

5. It’s my land, why should I perpetually pay the state for it?

It’s your land is it? Because there’s a title deed with a meaning upheld in national law? Consider what happens if there’s a revolution or if the country is invaded. What use is that title deed after that? Ownership of the land is granted by the state, which in a democracy means all of us. So we all grant an individual or business to own (or occupy) a piece of land. It follows logically that the owner of the land should be required to pay for that privilege to the rest of us, which is what LVT achieves. An added bonus is that this scheme reduces inequality. Think of a game of Monopoly where players have to redistribute a small portion of their wealth each turn. It would make the game go on for ever!

If elderly people want to stay in large homes (perhaps moving isn’t an option) then that should be fine. I wouldn’t expect their homes to be repossessed because they can’t pay LVT. But I do expect unpaid LVT to accrue and be paid on death. This rule should only apply to individuals. Owners that don’t die, like businesses and offshore trusts, should expect to pay each year.

7. It’s a socialist idea and should be rejected!

The surprising thing is that while the left-leaning UK Labour party is considering embracing LVT, it’s right wing think tanks like the IEA and the Adam Smith Institute that promote it. Tim Worstall of the ASI echoes many of my arguments, adding that LVT encourages the most productive use of the land in question. Milton Friedman called it “The least bad tax”.

Some parties, such as the UK Green Party, advocate replacing council tax with LVT. Their model sees local authorities setting LVT rates. But that’s essentially a way of lifting the cap on council tax that sees millionaires pay the same as billionaires. UK Labour haven’t set their stall out on LVT yet, but their thinking is likely to be similar. Left wing think tank The Fabians take a wider view, and recognise that inequalities of wealth are far greater tan inequalities of income in their discussion on the merits of LVT. If left wing organisations can bring themselves to stop chasing income and start taxing wealth, then the two sides of the political debate would be dangerously congruent, with just the Conservative Party (currently in government, just) out of kilter with everyone else. No prizes for guessing which party wealthy landowners support.

I make no apologies that I continue to promote Land Value Tax on this site. Land is a resource in limited supply that is ultimately owned by the nation. The more someone occupies it, and benefits from local infrastructure improvements and rising demand, the more they should compensate the rest of us for it. That sounds Marxist, but in fact it’s right wing economists and politicians that have come out in favour of it more radically than left wingers, who are generally slower to shift from raising existing taxes like income tax, corporation tax and council tax. The Conservative Party are slower still, and we can only conjecture why that might be.

Finally, this video from Dominic Frisby explains in a few minutes what I’ve spent the last couple of years blogging about.

« If you bought $100 of bitcoin 7 years ago, you’d be sitting on $75 million now
Taylor Review: UK should end cash-in-hand economy »