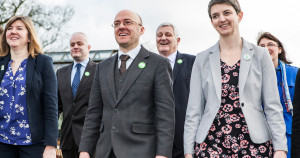 The Greens proclaim that Scotland needs a “Bolder Holyrood”

Like the Scottish Conservatives, the Scottish Green Party is looking to be a strong voice in opposition at Holyrood, holding “the main parties to account”. But that’s really where the similarity ends.

The Greens have a policy that requires a higher tax-and-spend agenda than many other parties. And this is not just on their traditional environmental policies like sustainable energy and recycling but also on areas that traditionally left wing parties might advocate such as equality, increasing social housing, supporting unpaid carers and funding opportunities in education.

Land reform has become a major strand to their politics too, where they promote change in ownership and land use, and they advocate an end to offshore ownership of Scotland’s land, so there can be greater tax accountability. The thrust here likely emanates from Andy Wightman, Green Party candidate and land reform champion whose blog is worth a read.

The areas of interest to this blog are as follows:

The Greens quaintly state that they will “…ask the wealthiest to pay more”. Of course, it’s not a polite request. It’s part of their income tax proposals which are more fully stated as:

Switching to this system would raise at least an additional £331million to invest in public services, and reduces inequality by four times more, compared to the SNP’s proposals for income tax. Someone earning the median salary in full time work – £27,710 – could expect to pay just £24 a year more in income tax. An MSP, earning £60,685, could expect to pay £938 a year more.

Of course these proposals raise £331 million so long as the wealthiest don’t move to their local tax haven otherwise known as England.

The current “Community Charge” is based on property prices, but the charge isn’t proportional to property value, it’s banded with charges cross-referenced against the value of the property, and set by the local authority. The Greens observe that:

We propose to scrap the discredited Council Tax and replace it with a Residential Property Tax. The Council Tax system is now based on valuations a quarter of a century old and the most expensive homes pay only three times that of the least expensive, despite being worth on average 15 times more.

So, starting with the assumption that local taxation should be proportional to the value of the property, how would a Residential Property Tax (RPT) work in practice?

A rate of 1 per cent across Scotland with a tax-free housing allowance of £10,000 for every home would raise an additional £490 million for local services. The majority of households would pay less than at present. Councils would have powers to vary this tax locally.

These proposals mean a house worth £310,000 will incur an annual RPT of £3,000. Owing to a banding system that’s 25 years old, it’s hard to compare this amount with the current Community Charge. But let’s assume this is a Band F home in Edinburgh. The Community Charge for Band F is currently £2,300 so the Green’s proposal means an increase of £700, or around 30%. Ultimately the Greens want to move to a land value tax (see below) for residential properties.

As with RPT, Greens propose to replace non-domestic rates (i.e. local charges to businesses) with a Land Value Tax (LVT). So the more land they occupy, in the more desirable locations, the more tax they pay. Conversely there is no charge for the value of what they might have on that land, which they believe will not disincentivise owners from improving properties.

There is sense in these proposals, but also there is a fear that they might have unintended consequences.

Taxing income as high as 60% would make Scotland so out of kilter with the rest of the UK, it’s easy to imagine high-paid jobs relocating across the border. I would also contest that wealth and income aren’t so inextricably linked as the proposals appear to claim. Somebody might receive £150,000 one year and nothing much for the next few years. This means they pay far more in tax than someone earning £30,000 per year. It also doesn’t account for how much the person spends. Should someone earning £150,000 but with a mortgage of £400,000 pay the same tax as someone earning £150,000 living in the family’s ancestral home?

Admittedly, the Greens’ wealth tax proposals (RPT and LVT) mitigate some of these concerns, but I would prefer to see taxes like these raised at a national level given that there is a clearer line of sight between land owned and the body granting the ownership of the land (i.e. the Scottish Government via the Scottish Land Registry).

I support the abolition of LBTT. By moving to a RPT and LVT there is no disincentive to move house or business. Indeed it positively encourages those who find themselves in homes larger than necessary perhaps after families have grown up to downsize owing to the RPT that’s saved. The same would likely be true if it were a LVT although selfishly this writer has in mind a large garden in his retirement so perhaps not so encouraging! Maybe the Greens will recognise that gardens aren’t for building on and value the land like parkland or agricultural land rather than residential land. (Please!)

For many, though, the main attraction of voting Green remains its traditional values of environmental concerns, equality and local involvement. Which is interesting given the thought that’s clearly gone into their taxation proposals.