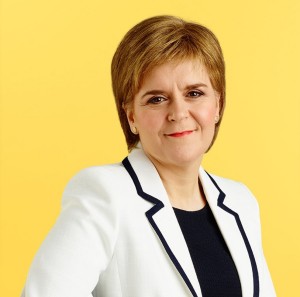 The SNP launched their manifesto at a packed event in Edinburgh today. The message is simple: RE-ELECT

The Scottish electoral system was designed so that no one party should dominate Scottish politics. It worked well until the last election in 2011, when the SNP, with a constituency vote share of 45.4% took a majority of the seats. Since then, their popularity has, if anything, risen. So many expect the SNP to once again form a majority administration.

Nevertheless, they are not being complacent. Their manifesto boasts of the infrastructure they have delivered, from the new Forth Crossing (opening soon) to roads, harbours, schools and hospitals.

Standing up for Scotland is what we do. We never shy away from an opportunity
to make this country even stronger. The SNP government stepped in to save
Scottish steel, Prestwick Airport, and the Ferguson shipyard. And when the
Tories tried to cut Scotland’s budget by £7 billion, we saw them off

The SNP is often seen as a single-issue party, that issue being Scottish Independence. But the pitch they have made is that they are the party on the side of the Scottish people, whatever the constitution and its voters might deliver.

As with all blogs in this series, I concentrate on the tax-and-spend aspects of the manifesto.

Critics of the SNP have often stated that theirs is a spending government, they are never held to account for raising revenues. This will, in part, change now that Scotland can raise (or reduce) its own taxes. Nevertheless, the manifesto starts with spending.

We have £2bn for the NHS, £1.3bn in “health and social care partnerships” and £450 million in three names health projects. Affordable housing gets £3bn (50,000 houses, that’s £60,000 per house) and the Help to Buy scheme will continue. There are promises, uncosted, across the board, affecting social justice, education, childcare and many other issues.

Unlike the Scottish Conservative Party, the SNP is resolutely against student tuition fees.

The SNP froze council tax “for the ninth year”, but now propose to allow a limited increase.

From next year, we will cap
any increase made by councils to a maximum of
3 per cent a year. We will reform local taxation
by asking those living in the highest banded
houses to pay more and reducing tax for low
income families with children.

As we saw yesterday with the Scottish Green Party, there’s a recognition that there is only a weak link between property prices and council tax. This proposal presumably introduces more proportionality.

The SNP’s proposals on income tax are relatively modest compared with those of many other parties. The key points are

These proposals are claimed to raise an additional £1.2 billion.

The SNP supports Help to Buy and Shared Equity Schemes. It will invest £160 million in these.

The SNP have played it down the middle regarding income tax. They have resisted the temptation to raise income tax other than to forgo a saving made by the UK government. They also recognise that raising the 45% rate to 50% might be counter-productive given the proximity of a lower tax rate jurisdiction across the border for those receiving well in excess of £150,000. Raising the basic allowance to £12,750 will take a number of low-paid, somewhere around the living wage, out of tax completely, consolidating its proclaimed credentials as the party for working people.

I am disappointed that there is no scope for more extensive land reform, especially regarding the connection between land ownership and the cost of running the state. The SNP recognises that more ownership transparency is the way forward, “We will build on the Land Reform Act to make land ownership more transparent.” but other than anything that might reveal itself as tax evasion, it’s not clear exactly what use they will make of this information. Maybe it will pave the way for a Land Value Tax?

The SNP’s manifesto mostly speaks about delivering improvements to Scotland, and reasserts its opposition to contentious issues like nuclear weapons and fracking. Financially, there is some tweaking but in many ways, and compared with other parties proposals, it’s largely business as usual.