What gives Money its Value? 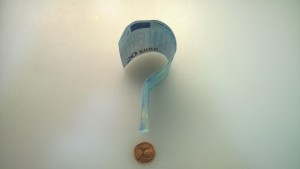 It’s just paper and cheap metal, so why does it have any value at all?

There has been much discussion about how gold and even bitcoin can have value, and that value is often expressed in terms of a currency. So let’s take the next step and investigate why currency has a value.

Whereas gold would once have been the only source of metal and therefore a valuable commodity, the same cannot be said for currency, which hasn’t had a fixed value against gold since 1972. And over the years and centuries before that, currencies were debased and tended to fall when valued in gold.

Consider this. You live in a place where you are under the protection of a warlord. The warlord insists that to pay for your protection you must deliver a certain number of tokens each year. In order to receive tokens, you have to borrow or work. The tokens can’t be manufactured using any process you know of, so what do you do? Yes, you could borrow with interest, and perhaps do well trading tokens against goods, but if you can’t repay the tokens you face a life of slavery. The safest thing to do is to work.

So who do you work for? Someone who can pay you tokens, of course. These tokens either come from someone who has borrowed them or they come from the ruler. So in effect, the ruler controls the circulation of tokens. Some of what you earn, you pay back to the ruler. The rest you give to others for goods and services so they can do the same.

And so we move from the simple model of coercive payments to taxes. Aren’t these coercive payments too? Well, yes, to the extent that the law allows various punitive measures to be taken against those who don’t pay, usually involving seizing assets (theft) and imprisonment (denial of freedom). We don’t equate these laws with the coercive protection payments a warlord might impose, because we generally recognise that our society wouldn’t function without taxes, although we often grumble about whether taxes are too high or are being raised for purposes we don’t agree with. But in the end, what gives money its value is our government insisting that taxes are paid in the national currency.

Anyone charging for goods and services in a jurisdiction will likely want to be paid in local currency because their tax liabilities are also in that currency. Indeed large corporations frequently hedge their income streams arising outside of their home country into local currency to neutralise the risk that foreign currency falls in value.

Because governments raise taxes in a local currency, it follows that their spending must also be in that currency. This means that anyone paid from the public purse will receive that currency in return. And any money paid by way of wealth redistribution like unemployment benefits and state pensions will also be in local currency, again giving rise to currency circulation and this is what gives money its value.

Governments and warlords aside, how can money have a value purely as a means of exchange? This is a more complicated question, although in many ways it also appears very simple. We buy and sell goods and services, so rather than my employer giving me a basket of everything I need for the next month, I am given an amount of money instead, which I exchange for said basket. The system works because everyone I do business with accepts the same currency as I do. This doesn’t explain exactly why a bottle of beer costs $5 or why an hour of a lawyer’s time costs $500 but it does quantify how many beers the lawyer can afford to buy with an hour’s work. In that sense, we might only need to own money for very short periods of time, between earning it and spending it. But many of us save or borrow too.

The values of goods and services will vary, of course. Next year the lawyer might be able to afford 110 bottles of beer, or perhaps only 90. The saver and borrower are therefore taking risks, because neither will know how much the value of their purchase changes before the end of their saving or borrowing period. Generally speaking, however, prices tend to rise rather than fall, reflecting the fact that it’s currency that’s losing real value rather than goods and services increasing in an arbitrary value against a currency.

An argument put forward by Frank Shostak at the Mises Institute is that currency has its value because it was once used as receipts for gold. Even though there is no gold standard today, currency has continued being used because it always has been. This contradicts the idea that society somehow collectively agrees that currency has a value, and suggests that attempts to introduce a new currency by social convention would not easily work (sorry Bitcoin!)

No discussion about currency can take place without mentioning banking. Most of the currency in circulation is created by banks, who create it out of nothing and demand it back with interest. All they need to do is to retain a small amount as “reserves”, out of money they have borrowed, relative to each loan. In fact the same money can be deposited and lent any number of times, each time creating even more money so that the total amount of currency in circulation (the money supply) can rise and fall according to demand. According to monetarists like Friedman, a plentiful money supply is inflationary, and to tighten money supply, banks need to raise interest rates thus making credit more expensive. Now we see the link between money and how its value changes. Although prices are driven by supply and demand, the money side can be tempered or stimulated by raising or lowering interest rates. Consequently, governments control, as much as they are able, how much the value of their currency changes. Central banks can also provide even more stimulus by creating more money, known as Quantitative Easing, especially when interest rates are already close to zero.

What can go wrong?

Quite a lot, actually. In fact fiat currencies tend to only have a short life, the UK’s Pound Sterling being the longest surviving currency, having been around since 1694. The average lifespan for a fiat currency is just 27 years! A quick trawl through google and youtube will uncover many doom merchants predicting the end of the US Dollar, and for convincing reasons, but beware that some of these are gold dealers who are very happy to tell you to hold the yellow stuff instead!

This doesn’t mean that currencies are useless. It means that as a medium of exchange, they are in fact very useful. But to hold a fiat currency as an investment, as one might hold gold, land or shares in a business, is perhaps riskier than we might be inclined to think.

« Poverty and the free market
Investing in Precious Metals »