No money, no passport, and a long way from home? 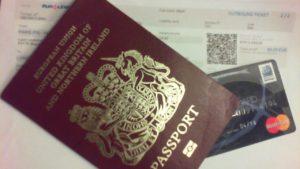 No money, no passport, abroad. How can we help someone?

Losing a passport while travelling abroad is bad enough. But forgetting a long-remembered PIN code as well is just hellish. This happened to my son. No money, no passport. Here’s how we dug him out of the hole.

Some accounts, such as credit cards and prepaid cash cards allow PINs to be revealed online. Others, such as my son’s current account, take four days to be sent out. No use in an emergency, but still worth doing in advance of returning home. He was hopeful of remembering it, but as I write that hasn’t happened.

We had already sent him a MoneyGram cash transfer which he collected from Porto, in Portugal, and he had EUR 30 of that left. Not much, given he had to get to the British Embassy in Lisbon to get an Emergency Travel Document (ETD) from there. MoneyGram was now out of the question, as government-issued photo-id is required to withdraw the transferred cash. We suggested using a trusted friend in Porto to receive the cash using their ID but for some reason he didn’t want to do that, and aimed to get to Lisbon with the cash he already had.

MoneyGram is a good, fast service, with cash available in minutes. But the ID is the killer in situations like this. Otherwise it’s a case of turning up with ID and a reference code supplied at the end of the sender’s transaction. I did everything online, but there are many outlets from bureaux de change to travel agents (e.g. Thomas Cook) who can do this over the counter. Similarly, the recipient picks up from these places, assuming it’s hard cash they need. Other services exist, such as Western Union and Transferwise. These work in much the same way, but with different costs and exchange rates.

If left totally out of pocket, say after a robbery, life can get very tough. It’s probably necessary to beg favours, even if that’s a phone call to the embassy or home. There may be no alternative but for someone to fly out and rescue them.

This proved easier. We could book accommodation (in a hostel) over the phone or online. Again, watch out for ID requirements, as some countries are a bit touchy about this and hostels and hotels are required to register each guest’s ID. In an emergency, I suspect that most countries will give a couple of days’ grace, though.

The challenge now was to get from Porto to Lisbon with only EUR 30. The fast train was out of the question, if only by a euro or so. The slow train was possible at EUR 24, but even that would have eaten much of his spare cash. However he was alert enough to find a bus for EUR 16, which seemed far more reasonable.

As with accommodation, it’s possible to book train (and bus) tickets on behalf of someone else. Portugal’s rail operator has an app for this, with “tickets” downloaded to an app, or printed as a PDF. But, surprise surprise, ID is also required when travelling with one of these. For some reason old-school tickets don’t require that. Anyway, the fast bus takes about the same time as the slow train, so bus it was.

Although he originally intended to continue to other countries, there was too much that needed to be sorted, and we needed to bring him in, as it were. We didn’t know how long the ETD would take, so we allowed a few days in Lisbon, booking him on a long distance bus to London. Not always cheaper than flying, but about a third of the price in this case. And about a tenth of the speed. Worth knowing about Eurolines in times like these.

One thing to note is that onward travel plans must be in place before applying for a ETD, as the ETD is specific about these.

Although he had arrived in Lisbon, and found his way to the hostel we had booked him, using up some precious spare cash on the metro in the process, he still needed to get an ETD. I had pre-booked an appointment for him, and was lucky to get one the following morning. So best to do this as soon as possible. Yes, it can be done on behalf of someone, online even. And they are very nice and helpful there.

Grabbing some breakfast (prepaid by us at the hostel) he used up most of the rest of his cash on a metro ride to the embassy. He was a little late, but they sorted him out. And after an hour’s wait, his ETD was ready. “They’re really nice people”.

Now he had his ETD, it was as powerful as a proper passport for MoneyGram purposes, and we could transfer some money to him. This went smoothly, fortunately, and as I write we haven’t heard from him since. So either he’s getting back to normal or his phone is lost or stolen. Now, why did I have to think of that!

First, at least try and make sure your loved one doesn’t travel without at least two sources of money. These days, that’s not too difficult, with different bank accounts as well as things like PayPal, AndroidPay and other technologies. Even Bitcoin ATMs can be surprisingly useful, although that was very much a last resort. And banks won’t like me saying this, but consider having a record of all their PINs, passwords etc so you can transact on their behalf if they really are in the middle of nowhere.

We always learn the hard way. Or, put differently, what doesn’t kill us makes us stronger. So we now know what to do in a no money, no passport situation (I think). And this is the order: if necessary get cash to them any way you can; they travel to nearest embassy or consulate; (meantime) book onward travel and appointment at embassy and consulate; book accommodation nearby, preferably with food; transfer money, ready to collect using the new ETD; order new PIN (this can be done any time).

« Income tax rises for Scotland
What will happen to Carillion pension savers? Lifeboat scheme will bail them out but cost could run to £800m »