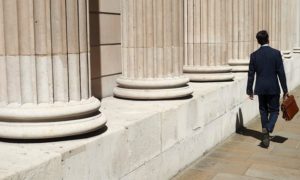 The monetary policy committee at Threadneedle Street acted with authority in not giving in to kneejerk impulses and keeping interest at 0.5%

It would have been the easiest thing in the world for the Bank of England to cut interest rates at the first meeting of its monetary policy committee since the Brexit vote three weeks ago.

Surveys have shown that the shock waves from the referendum have hit consumer and business confidence hard, and had an immediate impact on both residential and commercial property. The Bank’s own assessment of the likely impact of a vote to leave has not changed since June 23: life is going to be tough, at least in the short term.

What’s more, the financial markets had been primed for a rate cut by none other than the governor of the Bank of England. In the aftermath of the Brexit vote, Mark Carney said it was his personal view that during summer the Bank would need to boost growth. As far as many in the City were concerned, that meant a July rate cut. After all, if the economy was shaky and rates were going to come down at some point, then why wait?

When rates are as low as 0.5%, there is little to be gained by lowering them further, tempting though it is to think of 0.25% as a halving of rates.

Low interest rates are supposed to stimulate the economy, making borrowing cheaper, at the expense of saving and, indirectly, the exchange rate of the national currency. However with the value of the pound weakening since the Brexit vote, the stimulus might happen anyway, through foreign investment and increased exports.

Savers might like to think that interest rates are there for for them to benefit from, but at these levels, saving has little value any gains from interest being eroded by inflation. The biggest losers are pension savings. This affects both pensioners buying annuities, where annuity rates drop with interest rates, and final salary pension schemes. Lower rates mean pension funds being subject to increased liabilities and consequently an increase in required funding from their sponsors. This funding comes from company balance sheets which in turn reduces share price returns and the growth of pension funds investing in them. A viscous cycle.

The other weapon available to the Bank of England is more QE. This also has the effect of lowering the exchange rate and making money more available, but at the cost of inflation.

Much has been said about QE as “helicopter money”, created and fed to where it can be put to most use. The idea of “QE for the people” echoes much the same thinking. It is quite possible that a new prime minister and chancellor can be persuaded that a form of QE that isn’t designed for the banking system is preferable to the other alternatives on offer.