Brexit or Remain, Pound Is Set for Big Swings as EU Vote Looms 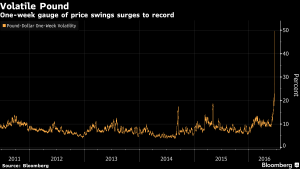 It’s almost upon us: the week when Britain takes the historic decision of whether to remain in the European Union.

And whatever the polls say in the days to come — and regardless of the result on June 24 — the pound is set for a wild ride.

One-week anticipated volatility surged Friday to the highest on record, posting the biggest increase among more than 40 global currencies tracked by Bloomberg.

It’s already been a week of ups and downs for sterling, which tumbled to a two-month low on Thursday after the Bank of England warned about a “sharp” drop on a Brexit and five polls in 24 hours put the “Leave” camp ahead. The currency strengthened Friday as campaigning was suspended following the murder of lawmaker Jo Cox.

“We do expect more volatility next week given there’s still so much uncertainty,” said Chris Chapman, a London-based trader at Manulife Asset Management (Europe) Ltd. “The ‘Leave’ side had appeared to gain momentum, but it’s unclear how much the terrible event on Thursday could temper that momentum.”

What do currency markets think of Brexit?

Currency markets give an indication of what the rest of the world thinks of the UK economy. Every time it looks more like the UK will exit the EU, the pound tumbles. If the vote on 23 June is for “Remain” we would expect the pound to rise. If not, it will fall further. How much? We don’t know. But the odds, from the betting on the outcome, suggest something around 30% for Leave and 70% for Remain, so the downside of a Leave outcome, being the less likely, is going to be higher value than the upside.

Do they ever? Most seem to suggest that the UK is better in the EU than out of it. But a lot depends on whether the UK can unlock its global potential outside of the EU. Government minister Michael Gove said

“We would be able to demonstrate that democratic self-government, the model of government that we have had in the past and that other countries like Australia and Canada use to their advantage, can be deployed by us in order to spend money on our priorities and in order to negotiate new trade deals with other countries.”

He said the UK could negotiate its own deals with China and India. Those who claim to know about these things counter that the deals won’t be on as good terms as the larger EU has negotiated and they might take many years to complete.

In general I would prefer to stay in the EU. I am not sold on the sovereignty argument nor the economic one. It’s not like the UK is especially a paradigm of democracy with its government elected usually by less than 40% of voters and its second chamber being elected by 0%. The EU provides a useful function in making sure the UK government doesn’t get carried away with policies that might appeal to the 35% or so who voted for them but not the 65% who didn’t. On the other hand, the idea of “United States of Europe” where the European Parliament is supreme is more scary. In short, the balance is probably about right at present. And from what we can see, financial markets probably agree.