These Are the Charts That Scare Wall Street 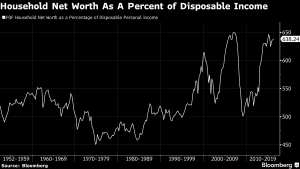 For finance professionals, Corporate America’s credit cycle and the U.S. economic outlook — not to mention Brexit-induced stresses and debt dynamics in Asia — are all spookier than a deranged-looking Bozo.
With Halloween just around the corner, we asked top analysts around the world for charts about things that go bump in the night — and we’re not just talking about the daily yuan fix. Here’s what they said scares them.

In this scary story find out that…

Bloomberg has done well to compile this list, sourced from economists around the industry. Of course, one chart doesn’t make a prediction, but when a number of them line up together perhaps we need to heed the warning signs?

I would be concerned about land (real estate) prices and low yields. But the next shock to the economy is probably going to be caused by something we haven’t yet thought about, because there’s no chart for it. Yet.