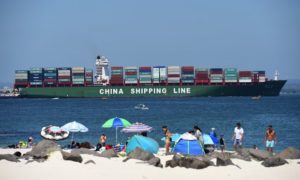 The Australian government has effectively cut its losses in the Trans-Pacific Partnership, signalling support for Chinese-led trade deals before a meeting this weekend of the Asia-Pacific Economic Cooperation group in Peru.

In an opinion piece published by the Australian Financial Review on Thursday and in an interview with the Financial Times before Apec, the trade minister, Steve Ciobo, said Australia would support a proposal being advanced by the Chinese government, the Free Trade Area of the Asia-Pacific.

“With the future of the TPP looking grim, my ministerial counterparts and I will work to conclude a study on the Free Trade Area of the Asia-Pacific, which sets out agreed actions towards a future free trade zone,” Ciobo said in the piece published on Thursday.

China was excluded from the TPP, which was the key economic component of the Obama administration’s pivot to Asia. It has pursued two rival trade pacts, the Apec-wide Free Trade Area of the Asia-Pacific and a separate trade deal called the Regional Comprehensive Economic Partnership, which includes 16 countries but not the US.

The USA, and specifically the Obama administration, has sought to cut trade deals around the world that eliminate tariffs. Controversially, though, they include special courts, meeting in secret, which allow companies to sue governments should governments restrict or remove opportunities available to them. This might be through nationalisation or even something like banning an additive or restricting items due to health and safety. In TPP’s case, China was never part of the discussions. Apart from anything else, China would never have agreed to these secretive courts. But now Australia appears to have shifted from the US model to a Chinese model of trade partnership.

But it’s not just the special courts that got Australia recoiling. A change in US president means that enthusiasm across the Pacific will ebb too, given Trump’s protectionist stance to international trade. AUstralia is concerned also that Trump will not honour a refugee resettlement agreement with the USA. Could this be where China becomes more relevant? China has been working on its own deals and is ready to talk to the USA about its proposals. If Australia, China and Japan decide to work on a new Pacific region trade partnership then it will be in a bigger position of power with respect to the USA than countries like Australia were in the TPP discussions. According to this article on ZeroHedge

“Had China been in the deal all along, we may not have seen the ludicrous provision that allowed companies to sue governments. That provision was one of the key reasons the deal failed.”

Meantime, in Europe, TTIP is being discussed that will provide a similar model to TTP with regards trade with the USA. It has also found opposition from people despite enthusiasm from politicians. With Brexit effectively removing the UK from any outcome and a change in US president, TTIP also looks doomed.

The USA is more comfortable with corporations running its affairs than other countries. In the UK, corporatism is distrusted even more than government by many people. Government is considered an expression of democracy, required to push back on corporate power. So while it might make sense to people in the USA that governments shouldn’t interfere in market forces, in the UK and much of Europe, that sounds wrong. Consequently the idea of setting up special courts to rule over government interference sounds sinister at best and corrupt at worst.

Perhaps it’s my UK DNA coming through. Whatever, I am pleased this deal looks doomed in its current state, and I hope TTIP also falls. Trade deals are good, of that there is no doubt, but any deal that signs away unfettered government sovereignty to make democratic decisions should not even see the light of day. Does that weaken a trade deal? In a perfectly free market, yes it does. The market becomes less appealing to organisations out to make money. But if we as a nation decide to (say) ban smoking then should we compensate tobacco companies? If a nation wants to crack down on workplace safety, should they compensate companies for having to buy hard hats? I don’t believe so. Trade is a privilege not a right, and corporations trade under whatever laws apply at the time.

Part of this discourse is rooted in the nature of what a corporation actually is. Legally, it is a “person”, which means it can be taxed and held accountable for its actions. Of course, it’s not a human person. So why do we think of treating it like one, compensating it when it’s upset or allowing it to sue a government? What indeed are we actually saying, in human terms? Basically we’re saying that investors and paid directors and employees of the corporation will benefit to a greater or lesser extent depending on how successfully their goods and services trade. It is in their collective interest to extract as good a deal as they possibly can. But is that good for the rest of us or just them? Much depends on what your economic beliefs are. A neo-liberal take would suggest that provided a corporation hasn’t become a monopoly, the less government interference in free markets, the better for everyone. That is hard to believe when it comes to workplace safety, food safety, exploitation, abuse of power and allocation of scarce resources. Yet neo-liberal theorists have an answer to all these criticisms. The other side of neo-liberalism is a strong state. A strong democratic state, in our case. If people in a state want to impose a minimum wage, then why shouldn’t they? Yes, it means the market becomes less efficient, and unemployment is likely to rise, but it’s the people’s right to be able to do that.