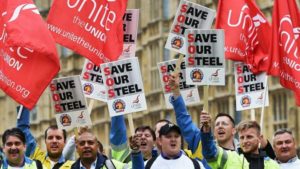 The government has been warned that a plan to cut pension benefits to help save Tata Steel’s UK operations could take ministers down a “dangerous path”.

Ex-pensions minister Steve Webb urged caution over “rushed changes” he said could have implications for workers “well beyond the steel industry”.
A £485m pension deficit has been deterring potential buyers of Tata Steel’s UK business.

A consultation on the pension scheme’s future has been launched by ministers.

It includes a “full range of options that consider whether and how the scheme could be separated from the existing sponsoring employer and whether it will be necessary to reduce the benefits within the scheme,” the Department for Work and Pensions said in a statement.
One option is to base the scheme’s annual increase on the Consumer Prices Index (CPI) inflation measure, which is usually below the Retail Prices Index (RPI) measure currently used.

The plan has been supported by some union leaders and the British Steel Pension scheme.

Altering the terms of the pension fund appears to be the least bad option. What’s been suggested is the rate by which pension increases are indexed, that they are to be linked to the CPI rather than the RPI. The thinking being that the CPI tends to rise more slowly than the RPI. This difference might seem minor but the pension fund deficit of £485 million is the difference between two very large numbers – its assets and the present value of its liabilities. By scaling back pension payment growth the liability side comes down and makes a large dent in the deficit.

If no agreement is reached, and with no buyer wanting to take on the huge deficit, the Tata Steel Pension Fund will be transferred into the government’s Pension Protection Fund (PPF), which reduces future pension payments to members under terms likely to be far worse than the proposal on the table.

So it sounds like a lose-lose scenario. Members and pensioners either surrender their right to a RPI-linked pension or their scheme will close.

How did this happen?

Defined Benefit (DB) pension assets often fluctuate between the red and the black. In good times, employers reduce payments into pension funds but in bad times they are required to raise extra funds to keep the pension fund solvent. Tata Steel UK has quite simply run out of money (said to be losing £1m per day), and it’s parent company doesn’t intend to support it any longer. And no buyer is going to pump £485m into the pension fund of a loss making business.

Should Tata’s pension fund have been allowed to run up such a large deficit? The short answer should really be: No. But we are where we are. In today’s low interest rate environment, liabilities have risen sharply from the days when long term rates were of the order of 8%. It might be argued that it’s only a technicality that liabilities have gone up so much. On the other hand, it means taking higher risks with the assets just to stand still, which pension funds are naturally loathe to take.

So it’s not mismanagement of the pension fund by the trustees. But arguably it’s mismanagement by Tata Steel UK to have let their fund get so far into the red through inadequate funding.

If DB pension fund assets and liabilities are shown on the balance sheets of sponsor companies, Tata Steel UK would have become insolvent long before now. And takeover discussions would have happened without the pension deficit being an issue.