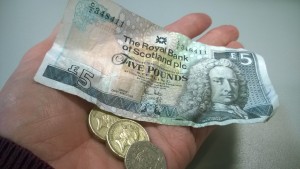 The letter was sent to the Chancellor, George Osborne, as a consequence of the announced rise in the minimum wage, to be known as the National Living Wage. A first step in the eventual 2020 Minimum Living Wage is a rise to £7.20 per hour for over 21s. The UKHCA estimates that with overheads, the cost per hour will rise to about £16.70 for a care worker earning the Minimum Living Wage. The letter suggests tax reliefs and incentives in the care sector to reduce the effect, and it was signed by representatives of a number of care providing organisations.

Is this the fault of a minimum wage?

Here’s an example. Employers such as Dunkin’ Donuts see a minimum wage as counter-productive. A minimum $15 per hour wage in the USA would make their outlets less economic and would likely cause closures. It’s a persuasive argument, but does it really reflect real economics? Sure, some Dunkin’ Donuts outlets will see lower profits. But there is an assumption that rather than accepting lower profits (higher costs), companies will use their capital elsewhere. And where would that elsewhere be? Surely not another business paying minimum wages as it too would be less economic. And, of course, people should be expected to pay more for their Donut, recognising the increased production and service costs which would affect Krispy Kreme and the rest of the market as much as Dunkin’ Donuts anyway. While we can guess that at least some unemployment will result from raising the minimum wage, we can also guess that a combination of lower margin expectations and higher product prices will restore much of the balance.

So, back to care workers. Right wing think tanks the Adam Smith Institute and the IEA have for a long time briefed against a minimum wage, as it challenged their free market principles. The providers of home care presumably agree with them, as it is they who must pick up the cost of government policy. But is this an accurate picture of what is happening in society? I don’t believe so.

Or does society not value care workers?

It is interesting that while there are many workers earning minimum wage, attention here has turned to care workers. Caring for people, many would have thought, is a responsible job. More so than handing out leaflets or picking cabbages, we might argue. So why does society not back up this assertion with money?

A point I have made before is that we as a society pay people more to look after our money, or even our car, than we do to look after our children or other family members who need care. So what does this say about our belief in a National Living Wage?

The National Living Wage is a great idea…

…so long as someone else has to pay it. Paying for care is never going to be cheap, and nor should it be. And I wonder how many people will still think it’s a good idea when their costs start to rise?

Hopefully the popularity of the living wage, National or otherwise, won’t be diminished because of the need to pay people doing essential work. Hopefully we will all get used to the idea that care is important, and important services cost money. It is interesting that the UKHCA contributed to consultations on the minimum wage on more than one occasion. They make the point that over half of independent homecare providers are dependent on the statutory sector (local authorities) for 80% or more of their business. Further, local authorities have the purchasing power to drive costs downwards, and service levels upwards, resulting in “paper thin margins”. Using the same logic as for Dunkin’ Donuts, home care providers should be in a position to charge local authorities more, on the basis that local authorities won’t be able to buy home care cheaper from anywhere else. Following this thinking through to its natural conclusion, we find that to make sure the sums balance out, council tax payers will either have to contribute more in tax, or service levels will have to be reduced. The reality in the UK is that local authorities cannot raise tax at will but are under strict constraints. In order to swallow higher care costs, savings will have to be made elsewhere, such as education, transport and housing.

Perhaps the government has got it wrong with council tax? Perhaps people are willing to pay more, if they know why they are paying more. And what could be more persuasive than to meet the rising costs of care for the elderly?

« Charity Debate: What makes a Charity a Charity?
Crime and Punishment in the Financial Sector »