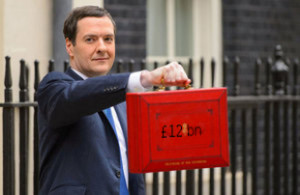 The second UK Budget this year will be announced on 8 July. What will the Chancellor do and how does he justify it?

The UK doesn’t normally have two budgets in one year, but following a (kind of) change in government at the general election in May, chancellor George Osborne is set to announce how to close the £12bn deficit, mostly with spending cuts. We examined his options a few weeks ago, but with more information now available, we look not only where the axe will likely fall, but also why.

Where does £12 billion come from?

The figure of £12 billion is the “deficit” – the difference between income and expenditure when expenditure exceeds income. If it isn’t eliminated then the government must borrow to make up the difference. That isn’t bad in itself, because sometimes income will exceed expenditure – a “surplus” – and debts can be repaid. However this government believes the UK’s debt burden is already high enough and would rather reduce taxes anyhow.

What taxes are set to be reduced and why?

The ideology driving this government errs more towards the libertarian than the last few governments. Although still well short of anything in play in the USA, the idea that working people should involuntarily pay some of their money to those who are not working is becoming more and more of an anathema. Libertarian ideals start with the individual, and taxation is equated to theft. Although few would advocate total anarchy, the belief that the state should only provide what is required to maintain security, justice and law and order is growing. Consequently, the part of taxation which amounts to redistribution of wealth looks set to be reduced.

The amount earned before income tax starts being levied has risen in recent years and looks set to rise to £10,800 this year then £11,000 next year. Low-paid wage earners have been taken out of income tax completely. This policy has been broadly welcomed across the political spectrum.

The value of a property allowed before inheritance tax kicks in is currently £650,000. This looks set to rise, perhaps to £1m. This appears to be very generous to those who are fortunate to be left expensive houses in wills. Many have campaigned for such a rise for a long time, mostly saying that family homes have to be sold to pay inheritance tax when wealth is tied up in property. But others say that it favours the wealthy, and that they are fortunate to be left such wealth in the first place.

The most controversial tax cut anticipated is the removal of the 45% tax band. The Chancellor has not committed to this, but is knows to be in favour of such a move. His allies state that penalising the wealthy means that economic growth is inhibited. His adversaries point out that it makes no sense to say that taxing the rich is bad for the economy but taxing the less well of is. Regardless of whether there should be a top rate and whether it should be 45%, even those on the right of UK politics are suggesting that when cutting deficits, it is not the time to also be cutting taxes from those who can most afford to pay them. This might be one he leaves for next year, although some kind of concession might be announced.

Will there be any tax rises?

Interesting question, because the government itself has committed to not raising income tax, national insurance or VAT. But there are other ways taxes can be raised, such as reducing the amount of funding to local authorities, resulting in increased council taxes (don’t blame us, blame your local council!) Also, taxation rules on pension contributions might be tightened further.

Don’t rule out taxes on things we haven’t thought of, either!

So it’s all in the spending cuts, then?

Just about. This chart shows how much the “non-protected” areas of spending are costing the treasury. In other words, anything the government has committed to ring-fence is excluded. The clear winner (or loser) is tax credits. I think we can be reasonably sure that tax credits will be hit harder than any other area of spending. Tax credits are paid to lower-paid working people. But they have been criticised as a way of effectively subsidising employers. And besides, says PM David Cameron, why is there a merry-go-round of working people paying taxes then receiving them back in benefits?

Housing benefit is also certain to take a hit. Exactly how this is worked out is yet to be revealed, but the PM and Chancellor have suggested that young people and those receiving the most benefit will face the greatest reductions, with a new benefit cap being brought in. The benefit cap is less controversial than most cuts so we can assume it’s a done deal. What is interesting, though, is that the cap will be higher in London than the rest of the UK. Is this the first time we have seen an explicit regional disparity in taxes or benefits?

The other big bar on the chart is Disability benefit. Critics here say that the degree of disability required to receive the benefit is set too low and is too vaguely described. Expect the word “reform” to be used, obviously with the aim of reducing the amount of expenditure. A figure of £30 reduction per person per week has been bandied around the internet of late.

What does the Opposition say?

The Labour party laid out its stall by stating it will support the budget if it met three challenges, which we repeat below:

Labour is clearly against tax cuts for the well-off, and it is for better administration of benefits and increased productivity measures. UK productivity has been criticised across the political spectrum but Labour, being the more interventionalist of the two major parties, would prefer to see government initiatives to increase growth and hence higher revenues for the treasury as a way of addressing the deficit.

Labour MP Stephen Timms criticises the government for what he sees as a lack of compassion. He claims that child poverty will increase if the expected benefit cuts are put into effect.

A battle of ideologies?

Yes, but not as much as we might think. Labour is still finding its raison d’etre after its election defeat, and doesn’t want to seem to be gloomy and against opportunity. Labour is not by nature a libertarian party, and was indeed founded as a champion of the employed, mainly in labour intensive industries. It was founded on the basis of a more equal wealth distribution, raising the standard of living of the least well-off at the expense of those who can afford to live on less. One might say they are not just inspired by Marxism but also utilitarianism. Although electoral appeal has moved their politics to be more centrist, and they describe themselves as social democrats, the Conservatives have perhaps met them in the middle, and there is less of an ideological gap today than there ever has been.

So ideology forms only part of the discussion. A larger part is probably the need to have popular support, which is how democracies should work. So the Conservatives cannot dismantle sacred cows of UK social infrastructure like the NHS any more than Labour could embark on nationalisation of major corporations as it might have done up until the 1970s. Similarly, the Conservatives will never ditch the welfare state despite the number of Milton Friedman fans they might have. They will just nudge its cost downwards as much as they dare. And this is what is happening in the budget this week.