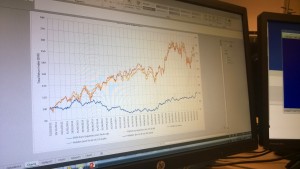 Active fund management means picking assets which meet the investment objective. So how have the lines become blurred?

Active and passive fund management have always been uneasy bedfellows. Active managers charge high fees to do their job. And some are very good at it. Many are, well, just average, which leads us to wonder why investors don’t pick low-cost passive funds instead?

The case for Active Fund Management

Imagine you have an investment objective. This might be to maximise the amount you have to spend when you retire, expressed in a certain currency, and subject to a certain tolerance each year (e.g. 5% return plus or minus 5%). That objective might be specific to your needs, and if it is, finding an off-the-shelf passive product might mean some degree of compromise. So you approach a fund manager to do the task for you. Depending on how much your portfolio is worth, that might mean a large investment house, a private bank or a small local wealth manager. You probably also have a financial advisor or intermediary to keep track of how well the fund manager is keeping to their mandate.

All being well, you will meet your objective and have a wholesome retirement.

In return the fund manager is paid a percentage of the assets each year. Again this will vary with size and complexity. A large pension fund might pay a fraction of one percent but the private bank and local wealth manager might charge much more than one percent. Over the duration of the investment, this might reduce the payout by several tens of percent. On the other hand, you can relax knowing that your money is being well looked-after.

Until anyone started comparing their investments with their peers, it was hard to know which managers were good and which were poor at picking the right assets. But now there are many resources for comparing fund managers, including star ratings and comparison sites. Although we might argue that no two funds are the same, it at least gives us a starting point for cutting down the number of fund managers we might want to speak with. Active fund managers have their reputation at stake with every investment decision they make, and successful fund managers run portfolios running into many billions. In some asset classes, like property and infrastructure, active management is the norm. Active managers assess risk versus expected return and make informed decisions. And that’s perhaps how it should be.

So why Passive Fund Management?

A few decades ago, there were many collective funds (mutual funds, unit trusts, OEICs, SICAVs etc) that had the same stated objective: to maximise return in (a market) using a balanced approach of income and growth. These “general funds” produces a wide range of returns each year, and some were known to be generally good and some were known to be generally not so good. When compared to a market index, many had returns which were frequently below that of the index, or were inconsistently above or below the index. This led to the question: Why not just buy the stocks which make up the index instead and fire the active manager(s)? Index tracking, and passive fund management in general, was born. The consequence was a largely commoditised market place with fees being driven downwards as economies of scale grew. The most famous index fund is probably the S&P 500 ETF, or SPDR, (ticker: SPY) which gives access to S&P 500 returns for around 0.1%. At the time of writing, it had $178bn of assets.

So it seems that active fund management, at least in equities, must be dead.

In some ways, it’s taken a bashing. Successful active managers have held their ground, though, and there are some big active funds out there. But as more and more indices are created, with more and more products using them available to the consumer, many are indeed switching to a portfolio of passive funds to meet their investment objectives.

Closet indexing – a consequence of indices

One consequence of indices is that active fund managers are likely to have their returns compared to them. These “benchmarks” are often even specified in investment objectives. So the fund manager will be asked to beat Index X buy 3% per annum, for example. Some have even less demanding objectives, which state that their returns are likely to be in excess of the benchmark. How does that affect the psychology of the fund management?

What is clear is that a fund manager that doesn’t have to beat an index benchmark by much probably won’t want to take any unnecessary risks. Consequently, the portfolio will likely look like the index, only with a few bets one way or the other. If a stock is 5% of the index, the manager might hold it to the value of 7% in the portfolio if they like it, but 3% of the portfolio if they don’t. This defeats the traditional logic of holding 0% of anything the fund manager doesn’t like! But these fund managers don’t want to get caught out for being wrong. If the stock rises from 5% of the index to 6% of the index, and they hold none of it, that’s a 1% underperformance, all other things being equal. Not good. Thus was born “benchmark hugging” or “closet indexation”.

Two articles have recently appeared, heavily criticising closet indexers for charging high active management fees yet offering a product little different to what a cheap index fund can offer. Andrew Lilico wrote in The Telegraph how the fees charged for closet tracking erode the small gains they might provide. He is right to say that the issue isn’t new, and has been around for 25 years (which I can confirm!) but only now is it plausible that the FCA might treat closet tracking as a form of mis-selling. To put things in perspective, if the money was indexed and charges reduced by 1%, the pension fund sector would be better of by £66bn each year.

Index tracker funds – all the same?

No, they track different indices. That wasn’t meant as some kind of flippant comment either. There’s no getting away from it. The most important decision an investor makes is the asset class(es) into which they invest their money. Even if you have decided to invest into domestic equities, decisions don’t stop there. Most indices are (free float) market captitalisation weighted. Consequently their returns are mostly driven by a small number of large companies. This is the folly that led to UK pension funds complaining how much they lost after the Deepwater Horizon spill knocked 30% off BP’s share price in 2010. So why, we might ask, did they hold several percent of their UK assets on one company. A bit risky, no? Well, the short answer is that their assets were benchmarked against a UK index that had BP as its largest constituent. The long answer is that they might like to take a more imaginative look at how they manage their risks. The moral of the story is that while index funds might be cheap, they must still be chosen with care. There are many types of index and index fund available today, some of which specialise in lower risk, which might be as simple as equally weighting the constituents.

Another important point is that even if we look at a particular index, fees can vary a lot. We mentioned earlier the SPDR and it 0.1% annual charge. Yet $2.2bn is invested into the Great-West S&P 500 Index Fund, which charges a boggling 0.6% per annum, causing Fund Reference to label it the Worst Mutual Fund Ever. We can only speculate as to why those 401(k) plans select it as their S&P fund of choice.