Five ways of Thinking your way to Saving Money 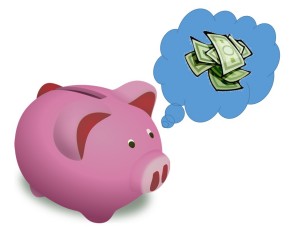 Saving money, especially in December when we spend more than any other time of the year, might seem impossible. But you just need to change your mind set

Thinking out of the box is the best way to free ourselves from unchallenged beliefs. The belief in question in this post is that we need to spend a certain amount of money to live a comfortable, fully-functioning life. I’m not suggesting that having no money at all is a good idea, but with a little change in the way we make meaning might have far-reaching impacts, and see us saving money.

1. Buy later rather than now

Consider what someone who came out of a coma lasting two or three years might think. They might recall wanting to get hold of the iPhone 5, or FIFA 2013. Or they might want to see the latest movies: The Hobbit (An Unexpected Journey) and The Hunger Games. Imagine how pleased they would be to know they can get hold of, or do all those things for a fraction of the price they thought.

We are conditioned to desire the latest technology and the latest thrills and we will pay good money for these things. But If we slow down a bit, and accept that there is nothing wrong with a 3-year-old phone – after all everyone loved it three years ago – then we could be just as happy, of not more so as we have some money left to spend on other things or indeed save it.

Of course we could live 10 years in the past, or 20, but technology isn’t really as forgiving as it might be. An analogue TV, video player and dial-up modem won’t replace the latest digital HDTV, online video service and fast broadband. Not even slightly. So it’s a case of finding the sweet-spot and ignoring anyone who says that the latest technology is a must-have. Because it’s only a must-have for a short while.

Saving money should be a win-win. Recently I was persuaded to get a take away meal because it would save time. Nearly an hour later, I was finally eating it, having ordered, waited, walked home, unpacked it, re-heated it (in 3 instalments – microwave only so big), served it etc etc etc. In that time I could have cooked my favourite meal – poached egg on toast – cleared away AND watched Dr Who. Many people might question how poached egg on toast could possibly replace the enjoyment of a hot spicy meal. But why not? I challenge the belief that because a meal is cooked in a restaurant that it is necessarily leaves me feeling better than something I could simply do at home. More complicated, yes, and less likely for me to attempt myself, yes that too. But poached egg on toast does it for me.

It’s not just food either. We are led to believe that any number of things we pay good money for are there to service our sensual pleasures. We could spend upwards of £50 (or $50 or EUR50 or whatever) on entertaining ourselves for the evening. I’m not looking to put actors, singers and DJs out of business here. But we could stay in and have a nice long bath listening to our favourite music. Anyway, you get the idea!

Yes, we are back to debt again on this blog. Saving money often does mean cutting debt first. There are essentially two types of debt: secured and unsecured. Secured debt we would normally see as our mortgage, although a loan can be secured against anything that the two parties might agree on. Secures debt tends to be cheaper than unsecured debt, because whereas debt secured on a house can be at least partly covered by the lender repossessing the property, unsecured debt has no asset to repossess, and the lender risks getting nothing back at all. That is the type of debt to avoid, from bank loans to credit cards to high street lenders to payday lenders. Interest rates can be massive.

To give an idea of the disinformation we’re fed by those wanting to lure us in to borrowing from them, this is the opening gambit from buy-now-pay-later retailer Bright House

Clearly aimed at the family breadwinner, perhaps feeling shame in not bringing in enough money and who wants to do more for his or her family, these exciting products incur an APR of 69.9%.

Even more cunning are the deals typically offered with phone contracts where for an extra £20 per month you get a “free” laptop. Yes, they really are marketed like that. Save your money and buy a good second hand laptop instead (see 1).

Do I really need to say that payday lending is the worst way to borrow money, short of local gangs whose methods of recovery certainly don’t involve the courts?

Advice I was given when I was young was to start saving in a bank so that when I needed to borrow money, the bank manager would know me and approve the mortgage. That advice is worth next to nothing now. For one thing bank managers (such that they might exist under a different name) have no discretion for approving loans. It’s a computer-driven process involving many variables, not least your credit history as provided by the likes of Experian and Equifax. What you will almost certainly find is that the best deals come from companies you have never done business with. Even after a fixed-term mortgage has come to an end, don’t expect the lender to off you any great deals to roll over to another fixed term. In fact you might not even get the deals a newcomer is offered, all the more reason to shop around. Tempting to believe loyalty pays but it’s you doing the paying.

The same, incidentally, applies to many many business such as phone companies, utilities, insurers, savings account providers and in fact anything that involves a long term subscription.

You have to really think out of the box on this one. Start by assuming that when you enter a supermarket, everything you see is there for a reason, and that reason isn’t to give you a good deal, whatever the banners might say. Assume that there is a reason why one brand of tinned tomatoes is on the top shelf and another two shelves down. Assume there is a reason why a random cart of cheese has been left casually at the end of an aisle. And assume there is a reason why small bottles of ketchup are offered at two for a pound and large ones are placed right next to them. Be suspicious. Because each of these strategies tries to hook you in to a purchase that makes more money for the supermarket. Take a look at the tomatoes on the lower shelves, the cheeses in the cheese section and the price of a large bottle of ketchup and you might see that the product that caught your eye first isn’t the best deal. Frequently I find that two small bottles of ketchup can be cheaper than one large one, ditto blocks of cheese and boxes of dishwasher tablets.

The list can go on forever. Branded painkillers costing perhaps ten times the price of unbranded ones which deliver the same drug is very common. There are many articles on the subject of supermarket psychology, and I like this one.

And as this is the festive season, if you were clever enough to buy your Christmas decorations, cards, lights and gifts last January, you are not only saving money, but you can smugly look at people like me paying much more today than you did back then!

« Blurred Lines: Active and Passive Fund Management
NHS funding – what options are there? »