Money – Can we trust it? 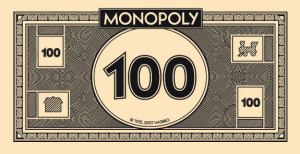 Money is just paper and cheap metal. So how come it’s worth anything?

A bit of background

There was a time when money really was the coins you carried around with you. A gold coin was worth its weight in gold. Likewise silver and copper were forged into equally-weighted pieces then “coined” with the ruler’s head (hence our use of the word “coin”). On the plus side, this gave the coins an official stamp of approval, and these were used for tax collections and to pay employees of the ruler (usually soldiers). On the minus side, the temptation to debase the currency was too much. The ruler would dilute new gold coins with copper, making them go further, and effectively creating money out of thin air.

When paper money appeared, it was for all the right reasons. It would be backed by gold, which would be held in the national bank or treasury vaults, but would be easy to carry around and settle accounts. This was the “gold standard”. But again, and over a number of systematic changes all of which meant printing more money, the monetary value of all the banknotes came to exceed the value of the gold held in the vaults.

Finally, and crucially in 1971 when the USA abandoned the gold standard, currencies became “fiat currencies”, meaning that their values are only backed by what people and their governments say they are worth rather than convertible at a fixed ratio to any particular assets.

Recent quantitative easing (QE) policies around the world have flooded the markets with currency. Although this should have created inflation, it hasn’t. At least, not in the countries doing the QE, although some say inflationary problems elsewhere in the world arose because of apparent wealth creation in countries carrying out QE. Nevertheless, the result is even more currency of arbitrary value than there was before. An extreme outcome of QE would be hyperinflation, to which the response will be high interest rates.

Those familiar with basic physics will know that energy can not be created or destroyed, only converted. The same can be said about wealth. Every transaction converts one person’s wealth to another person’s wealth. Consequently, the total wealth of the world must stay the same regardless of how many banknotes are in circulation. Also consequently, the more banknotes that exist, the lower the purchasable wealth of each one.

But money works, doesn’t it?

First, let’s start using the word “currency” rather than money. Currency is what we transact with and it is supported by national or (in the case of the Euro) supra-national banks. Importantly, it’s what we are paid with and what we use to pay for goods and taxes.

But does it work? Yes, it works at the moment. But can we trust it to work for all time? There are many websites and books on the subject of fiat currency. In short, none have ever survived. Pounds Sterling in the UK has been in circulation since 1694 and is believed to be the most sustained extant fiat currency. But the average lifetime of a fiat currency (depending how this is measured) is only around 27 years!

But existing longevity is no guarantee of future longevity. And, besides, the “UK model”, if such a thing exists, has changed over time to become much the same as any other national monetary policy, and this means that there is no reserve of gold, silver or any other asset sufficient to account for the value of the currency.

So is gold and silver the answer?

Difficult one, this. Historically, yes, these precious metals are money par-excellence, because they are portable, durable, rare and divisible. Other assets like oil, land and livestock do not have all these qualities.

Sticking with gold and silver for now, though, it’s easy to see the attraction. We often talk of the price of gold going up or down. But what is equally accurate is to say, in terms of units of gold, that the value of a currency is going up and down. Indeed the direction is generally downwards. In USD terms, gold costs more than three times as much today than it did 20 years ago. Indeed it’s much the same ratio in GBP. If we go back 40 years, an amount of GBP buys only one tenth of the gold today than it did then. The case for silver is currently more interesting, as it is cheap by historical standards.

It’s easy to criticise this comparison. After all, wages are much higher today, and currency can earn interest. This of course is true. But as a preserver of wealth, gold is clearly the winner in terms of its purchasing power. The argument about interest is a good one, however in theory gold too can be lent out for interest, as indeed it frequently was in the middle ages. Interest carries a risk of default, though. And even if a nation can never default on its debt, because it will create more money to meet its debts, the consequence is that the value of the currency will fall as a result.

What alternatives are there to gold and silver?

Gold and silver are traditional preservers of wealth, alongside less used metals like platinum and palladium.

However there is nothing guaranteed about their ability to carry wealth forward. They are a kind of fiat currency themselves, albeit one that has nothing to do with national governments. If the world decides it’s not interested in rare, durable metals then gold won’t buy as many loaves of bread as we might hope. The same applies to diamonds and any other precious mineral.

Land and the property on it is one alternative asset

Land is interesting, because preserving ownership of it essentially requires having bigger guns than others who might also want it. You can’t just put it in your pocket and emigrate. Our government maintains land registries, which can be highly controversial, especially when the residents of the land are not the same as the owners as entered on the registry, such as happens today in parts of the world with indigenous, disenfranchised populations. If we go far back enough in time we will likely find that the succession of ownership of the land where we currently reside was acquired through some kind of force.

There are other assets backed by established laws and registries such as patents and intellectual copyright. Enforcing ownership of these is not always trivial and again it comes down to who has the power.

There is no intrinsic value to any of these goods. But their values do seem to increase with time although their sustainability is questionable.

The case for shares and bonds is probably more easily understood than most assets, and they behave a bit like currency. Like currency, their value could be zero one day. But at least, on average, an investor is buying into the success of an organisation in generating wealth through its business operations.

The new kid on the block has caused a lot of head-scratching. Warren Buffett refuses to touch bitcoins, believing them to be a conveyor of money rather than having any intrinsic value. Time will tell whether they catch on and become accepted in the way gold is accepted. One good thing is that QE is impossible with bitcoins.

Do we need to be worried?

There are those, mainly in the USA, who distrust the Federal Reserve and the monetary policy of the state. They will tell you that the dollar is doomed to fail and that gold will have to once again take over as a unit of wealth. One such commentator is Michael Maloney, who suggests we are at the tipping point already. His critics will argue that as a gold and silver trader, his forecasting is perhaps a little biased.

The questions we should perhaps be asking ourselves are:
– If there is a currency meltdown, can I and my dependants get by with my/our other assets?
– I can’t avoid being paid in currency and settling my taxes and bills in currency, but are my savings and assets safe?
– If there is hyperinflation and interest rates rise sharply, then if I have debts, including a mortgage, are the interest rates capped or fixed?

So the answer to the question is?

My own opinion is that I am a little worried. The banking crisis which started in 2007 resulted in QE and very low interest rates, which although wasn’t inflationary (yet, at least) saw the wealth of working people effectively fall in order to keep the banking system functioning. Now, 8 years later, there still seems to be a long way to go, and there could be more crises yet to unfold, resulting in more monetary gerrymandering in attempts to fix them.

I personally find it hard to get enthusiastic about gold and silver and harder still to think about art and fine wines. I have savings and investments, and these have defensive qualities which go some way to hedging future liabilities. Yet they are not bulletproof. So like many others, I too am vulnerable to a financial catastrophe.

The answer seems to be something like: Invest in yourself. By making sure you are indispensable and will always have the knowledge and wherewithal to receive acceptable payments for your services, you will be better equipped to be less reliant on the value of a currency at any particular point in time.

Oh, and make sure you aren’t owing any variable-rate debts either!

« Unpaid Internships: fair or unfair?
ETFs – A clever way to build portfolios? Or just a fad? »