Money’s Too Tight To Mention – 30 years on 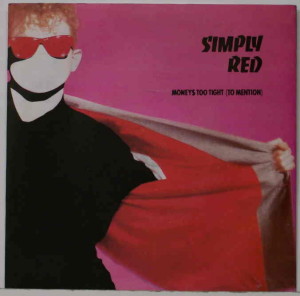 Money’s Too Tight To Mention

In July 1985, the UK band Simply Red scored their first of many hits with Money’s Too Tight To Mention. Although not written by the band – it had been recorded three years earlier by the Valentine Brothers – the Simply Red version excluded lyrics referring to Nancy Reagan that featured at the end of the original.

Why were so many songs about money in 1985? We visited Dire Straits’ hit Money for Nothing a few weeks ago. And we recognised that this was an era of Ronald Reagan and Margaret Thatcher, and an economy that on the one had seemed to be doing very well – the stock market boom had started and would continue till October 1987. Yet on the other hand, the booming economy seemed to be concentrated in some people in some parts of the country (in the UK anyway) and was leaving large numbers of people behind.

In 1985 everything seemed to be about money. National corporations were being privatised, and advertised to the public through expensive TV commercials. Houses prices were rising fast, and people were encouraged to take large mortgages to get on the “housing ladder”. For those with little or no money, it would have appeared surreal.

Why did the song appeal?

I don’t recall people whose politics were up there with Thatcher disliking the song. So it might be tempting to say that the song’s appeal was in its music rather than its lyrics. On the other hand, they may have been a kind of desensitisation to songs about being poor, there being a general liking of blues music from the USA, for example. But this song, and there were others like it, had a harder, political edge to it.

Although not in the same camp as Billy Bragg’s songs, or the Redskins’ “Bring it Down (this insane thing)”, the song probably struck a chord with left wing listeners at the time. Perhaps too the name of the band “Simply Red” was assumed to be chosen for its left wing connotations. They would have been at least partly right. The “Red” had a three way meaning: mostly it was because lead singer Mick Hucknall had red hair and was known as “Red”. But also because he supported Manchester United and was indeed left-wing, politically..

I believe the song was mainly a success because of the good production and Mick Hucknall’s voice. The edginess of the lyrics was a bonus: Simply Red’s subsequent hit songs were more about love and loss.

Is money still to tight to mention?

Taken literally, money has never been too tight to mention. But metaphorically speaking, it was and always will be. Poverty will probably never be eliminated, but recently we have a new kid on the block: relative poverty. The definition doing the rounds is that relative poverty is when a family receives less than 60% of the median income in the country in which they live. A recent piece of research suggests over 2.3 million children in relative poverty in the UK. Money is indeed tight for some.