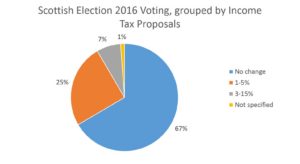 The Scottish Election ended with a predicted SNP victory, but not a majority

Many commentators have described the outcome of the election as a rejection of independence. This is because the SNP fell two seats short of a majority. However it ignores two things. First, that the

Of the unionist parties, it was the Scottish Conservatives that had the most to celebrate, increasing their representation from 15 to 31 MSPs. This might sound like good news for the UK government, but recall that only last year one single MP was elected from that party, and there’s no reason to assume that the same voters will return to vote for the Conservatives at a General Election. Besides, a period of four years is a long time to make political predictions. This vote was ostensibly for Ruth Davidson and the Scottish Conservative Party, not for David Cameron who was nowhere to be seen during the campaign (probably this helped).

The Conservatives claim bragging rights by increasing their count of constituency MSPs while Labour’s decreased. But what really counts in Scotland is the “second vote”. This is a regional system of proportional representation, where the starting position is those MSPs elected by constituencies and to this is added MSPs from parties thus making the outcome as proportional as possible. Sometimes, as with the SNP in 2011, a party wins so many constituency seats that even when the list “top-ups” are added, the party is over-represented. But usually it means that winning a constituency doesn’t mean the party ends up with more MSPs than if they came second. Why? Because the second vote delivers the MSPs instead.

So rather than considering the number of constituencies won, the purpose of which is mostly useful for colouring in maps, the total second vote must be considered. And actually the Conservatives did very well there too! Here is the split.

And as if to prove the point about independence and proportional representation, the SNP and the Greens have a combined 51% of the vote and 69 out of 129 seats in the parliament.

It was about taxation too

This is hard to prove, but if other commentators can call this a vote about independence, then I have every right to bring taxation into the mix.

In the 1999 election, the SNP proposed raising income tax by 1%. It wasn’t popular nor have they proposed it since. It’s generally reported that the SNP is a socialist party. But there is little in their manifesto to separate them from the Conservatives. Both support state institutions like the NHS, both want to keep spending down and both propose low taxation. So maybe it’s no coincidence that these two parties came first and second?

Although UKIP proposed lowering taxes, theirs isn’t a party with a large profile in Scotland. The parties that wanted to raise taxes did less well. In this article I described each party’s plans for income tax. Here’s the chart to illustrate that.

The Conservatives don’t show at all, because they want to keep income tax rates the same as for the rest of the UK. The SNP only shows at the higher rate because it plans to withhold a raise in the threshold at which the higher 40% rate is paid. It amounts to £215 per year maximum. Labour and LibDems planned an extra 1% at the basic rate and higher rate, with Labour raising the top rate from 45% to 50%. The Greens and RISE (a socialist party) propose little or no change to the basic rate but a 15% hike in the higher rate. This creates three distinct groups of parties: the “No change” group (SNP, Conservatives and UKIP), the “1% to 5%”group (Labour and LibDems) and the “3% to 15%” group (Greens and RISE). Actually that’s beimng a little unfair to these parties as the label refers just to their higher rates. But they are more similar to each other than they are to any other party in this respect. Some small parties didn’t spell out their income tax proposals, so they’ve been added as a fourth group. Here’s what the second preference vote share looks like. 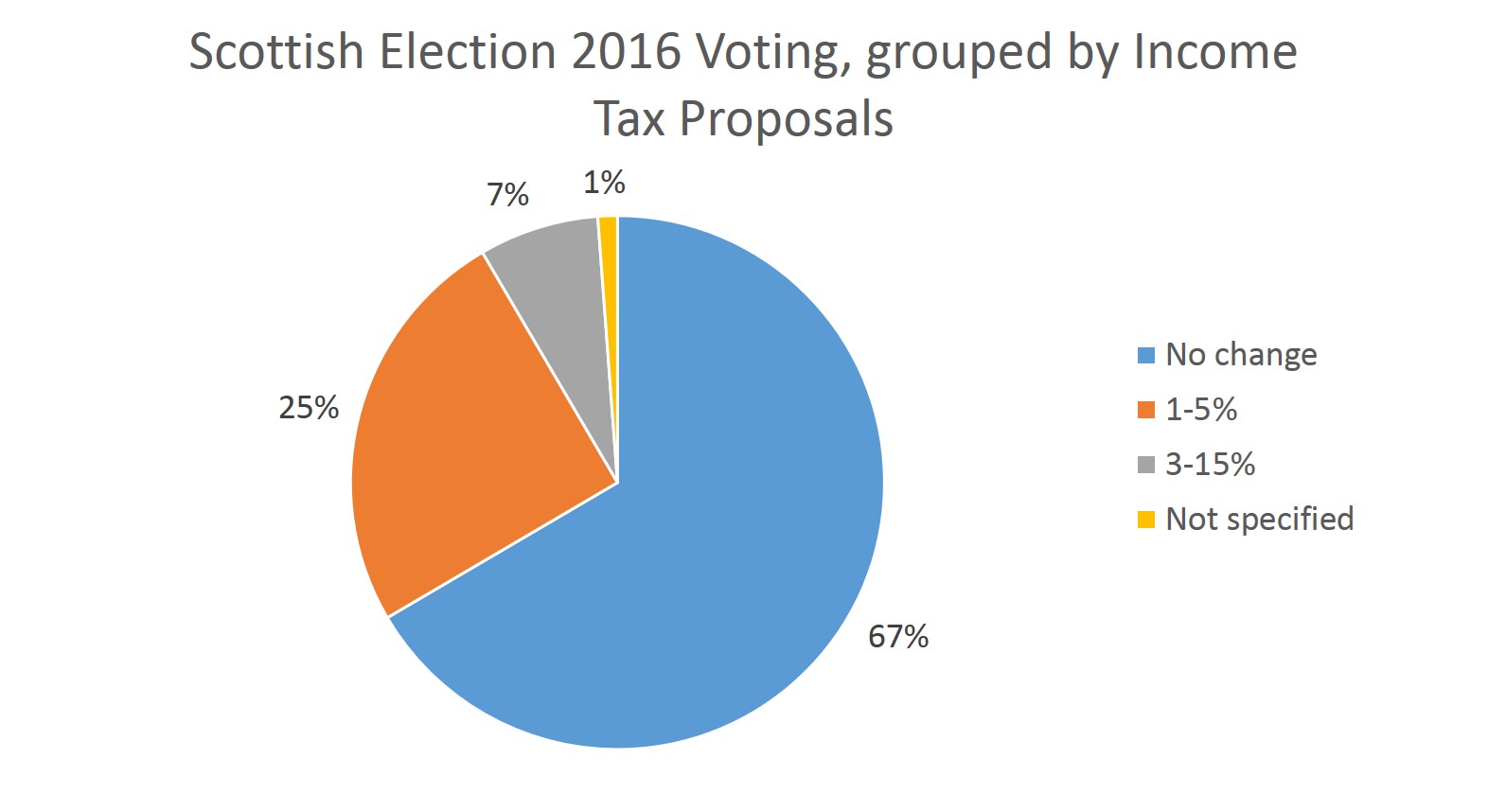 Two thirds of the Scottish electorate voted for no change. Of course they voted for many other things as well, but perhaps the thought of taxes going up, particularly for higher earners, was enough to put sufficient people off voting Labour, LibDem, Green or RISE and pushing them towards the Conservatives and SNP.

I know many people who say they wouldn’t mind paying more in taxes if it was spent responsibly. I also know many people who say that taxes are wasted on those who won’t work, who shouldn’t be here, on vanity projects, on weapons, on the EU, on overseas aid and indeed on many things that sees them erring towards lower taxation. With the personal allowance creeping up so that fewer and fewer people are paying income tax, perhaps one day the non-tax paying majority will vote for large tax rises for those who earn above the personal allowance. For this reason, my own belief is that everyone should pay something, even if it’s a proportion of an enlarged benefit just so that there’s a linkage between cause and effect with regards taxation.

Maybe this works unconsciously, maybe not. But I have yet to see a party win any election here in the UK with the promise to increase taxation for most taxpayers. The parties past 8 o’clock in the pie chart should take note.