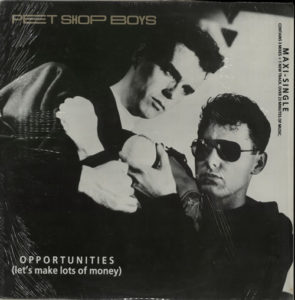 Although the song was originally written in 1983, and recorded in 1985 without chart success, it was released for a second time as a single in May 1986. It’s peak chart position in the UK was number 11, not the highest by the Pet Shop Boys, who actually scored four number ones in their career (two were covers) but it remains one of their most catchy titles and taglines:

Opportunities featured on the Pet Shop Biys’ first album, Please. The album contained their breakthrough hit West End Girls, which reached number one. The sound was basically synth and vocal, with playful lyrics leaning towards the camp and with references to living in the suburbs of a big city. This article describes the album well.

What was Opportunities about?

During the mid 1980s, a number of songs came out on the subject of money, such as Simply Red’s Money’s too tight to Mentiion and Dire Straights; Money for Nothing. Many attribute this to the “yuppie era” characterised by the peak of the boom-bust cycle during the Thatcher governments. In 1986, some people were indeed making lots of money. According to some, Opportunites was a comment on Thatcherism too. However the Wikipedia entry makes no mention of this, referring to the origins of the song as the John Voight and Dustin Hoffman characters in Midnight Cowboy.

Whatever the inspiration, the lyrics, like the title, narrate the business proposal from the “brains” character.

You can see I’m single-minded, I know what I could be
How’d you feel about it, come and take a walk with me?
The suggestion throughout the song is either that the proposition is exploitative, or it’s being talked up in the manner of hard-sell, another characteristic of the era.

You can tell I’m educated, I studied at the Sorbonne
Doctored in mathematics, I could have been a don
I can program a computer, choose the perfect time
If you’ve got the inclination, I have got the crime

The playful lyrics clearly don’t represent the duo’s true belief system, or even their own relationship (despite the video depicting them as the two characters in the song). The song is a cynical take on the “Loadsamoney” caricatures of the day. And it really did make them lots of money.