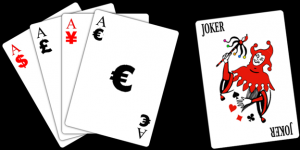 With April Fools day upon us, let’s ponder the old adage “A fool and his money are soon parted”.

I don’t think the quote was intended to suggest that fools are necessarily male or that only men are foolish with money. Rather it suggests that fools can’t be relied upon to manage their money with prudence.

A few years ago, Bernie Madoff famously managed to attract a great deal of money into his investment schemes.

These turned out to be scams, and some very high profile investors lost their money, including some banks and others who really should have known better. Was this elite club of investors nothing more than a group of fools? Perhaps. And no doubt they felt rather foolish afterwards, but is this nothing more than the kind of foolishness that goes on all the time on a much smaller scale? Each week, for example, people play the National Lottery. Millions of people in the UK, and doubtless millions more in other countries too, play this game in the hope of becoming millionaires. The chance, however, is remote. The jackpot has odds of 14 million to one in the UK. I would probably be lynched if I accused everyone playing the National Lottery of being foolish, but the point is that as investments go, for most of the people and for most of the time, it’s a bad one, just like Madoff’s were.

So how can we be, well, not foolish?

That’s a tough question. In 2008 it looked like banking systems around the world were on the verge of collapse, and a number of banks did cease to exist. Many people for whom investing in the stock market was too risky a prospect suddenly found themselves liable to losing perhaps everything because they chose the relative safety of a bank account. Suddenly hard assets like gold became popular, on the basis that if every form of money became worthless, there would still be gold. So do wise people buy gold? In some parts of the world, yes. But the value of gold rises and falls against currencies and it therefore has its own risks.

The financial advice often given is to spread out our investments.

So even if we had 1% of our money in Madoff’s schemes then it wouldn’t hurt us if they failed. A financial adviser will probably recommend to you a mixture of assets – stocks, bonds and cash with perhaps some “alternatives” like hedge funds and property. And diversifying risk is hard advice to ignore. But to add to the confusion, the world’s most famous investor, Warren Buffett, partly counters that advice with “Diversification is protection against ignorance”. It’s a clever double-edged snippet which agrees with the idea of diversification, if you are a fool that is, but at the same time champions his own belief that you should “Never invest in a business you don’t understand”.

What have we learned?

Bringing everything together, and assuming Buffett is a less foolish investor than most of us, what have we learned? First, at least try and inform ourselves about what we are really trying to achieve, where our money is going and who is going to be handling it on our behalf. This article came out a few days ago talking about this very subject. Second, accept that some of the time we will get things wrong. Consequently never put more money into anywhere or anything you don’t understand than you can tolerate losing. Finally, fools and money are inseparable. A top financial website champions this idea. We can’t really avoid being foolish. It’s called risk, and if we can’t stand it then we would be better off living a life of simplicity like a monk than risk being miserly and miserable like Fagin.

In summary, we are all fools. So let’s at least be informed fools.