Deliveroo announces it will not force new contracts on workers 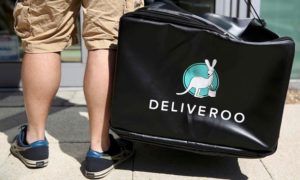 Workers for takeaway delivery firm Deliveroo are claiming victory after the company said it would not force them to sign contracts agreeing to new pay terms, following a week of protests.

A trial due to start in parts of London on Wednesday will see couriers for the company switch from an hourly rate of £7 plus £1 a delivery to a payment of £3.75 for each drop.

Riders, who believe that the new deal could result in them earning less money and remove the certainty that they got from an hourly rate, cautiously welcomed the deal.

Couriers were originally told that they would have to sign new contract terms, or no longer be able to work for the firm. On Tuesday evening, after seven days of strike action by couriers, the firm said that it would no longer be asking riders to alter their contracts. It told those who wanted to switch areas that they would be able to work nearby.

After the concessions were announced, the Independent Workers Union of Great Britain tweeted that it was victory for those who had refused to work, and said riders were set to go back to work on Wednesday.

Deliveroo’s policy is an example of moving, or wanting to move, their employment conditions from time work to piece work, £3.75 per delivery, in fact. Rather than pay their courier by the hour, they want to pay them by the delivery. While they say that couriers may earn more this way, chances are they won’t. Otherwise why would Deliveroo offer this?

Actually there is a good reason why Deliveroo might open themselves up to paying out more, and that is to mitigate risk. The piece work offered means that Deliveroo’s human costs are directly proportional to their revenues. More orders, more deliveries. Deliveroo then makes a profit by retaining the difference between the amount they charge their customers and the amount they pay their couriers. If there is a downturn in the market, or (more likely) a competitor starts taking market share, then they are not burdened with the disproportionately high costs of retaining inactive employees.

Similarly there is good reason why the employees would like to reject the proposal. The same reason in fact. The employee is also risk-averse and their outgoings have nothing to do with the number of orders received by Deliveroo. They need to know how much money they can expect to earn, and with this kind of work, we’re talking about something at or close to minimum wage.

In short, each side believes the other should bear the risk of a fall in business.

The Deliveroo case is unsurprisingly split by one’s political leanings. Right wing think tank, the IEA, side with Deliveroo, stating that their entrepreneurism should be welcomed for the job creation which it creates but the Centre for Labour and Social Studies focuses on the exploitative practices by Deliveroo (and Uber). The following video from Channel 4 explains the issues well.

Money Questioner’s take on this

Employers have been pushing more and more away from time work to piece work. This includes zero-hours contracts, which is a kind of mid-point between the two. We might argue that modern working practices, which major on rights and assurances for employees including minimum wage, conspire against job creation.

In many ways I am sympathetic to the “everyone should be self employed” mantra, from a theoretical point of view anyway. But the reality is, many people don’t want that kind of working environment. Piece work is fine for the self employed like window cleaners and taxi drivers but for the employed, the country moves into a different paradigm when large employers force self-employed types of working practices onto their work force.

For this reason, I see the likes of Deliveroo as a danger to our working economy. And it’s plain inefficient for everybody to have to continually market themselves in order to succeed. Our employers are important to our society for many reasons. How would we secure a mortgage or pay the rent without regular income, for example? And how can we even hope that employers will stop here? Pressure to cut costs will always drive power to those with wealth at the expense of those who are living hand to mouth. In our democracy, we are all stakeholders in our economy and it’s our right to assert the types of working environment that suits us. Meantime, those wanting to be self employed can do so in the true sense of the work, without being beholden to an employer who will always have the upper hand.

« Is the cost of living cheaper today than 80 years ago?
Taxman – 50 years of the Beatles’ Revolver »