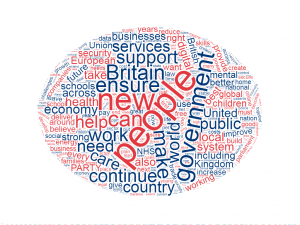 The Conservative Party Manifesto promises nothing on tax, more intervention and regulation, and a new social care costing regime

Conservatives’ tagline: Forward, together
The manifesto can be found here

(that works for everyone, to complete the oft-repeated sentence). To quote from the manifesto: “We will found our plans on the principles of sound public finances, low taxes, free trade and effective regulation. We will set rules for businesses that inspire the confidence of workers and investors alike.” Anyone spot the contradiction? While the UK has for the last 28 years risen from an largely state-controlled economy to a neo-liberal ideology, peaking perhaps with the Blair government in 1997 and falling back since the 2007 financial crisis, this manifesto appears to demand more regulation and state interference in corporate affairs. This is not free trade. Neo-liberals will spot that right away.

The 2010 Cameron government promised balancing the budget by 2015. It failed, and each year the UK runs a deficit. The target has been extended and if the government succeeds in cutting borrowing in any year before 2022 it will claim a success. Not only will this be 7 years after it first promised, but it could mean 4 more years of debt increases before the first zero-deficit budget. So yes, the foundation for a strong economy, but not yet.

Keeping taxes as low as possible

Conservatives have claimed to be the low taxation party for decades now. And to be fair, the Conservative governments of the 1980s and 1990s did go some way towards achieving this, mostly by selling off state assets. On the other hand, VAT has risen and new taxes have been brought in, like insurance premium tax and air passenger tax. And the last Conservative government (in coalition with the Liberal Democrats 2010-2015) also increased the Personal Allowance, the amount of tax free income allowed in any tax year, from £6,475 to the current target of £12,500. There have been winners and losers in that period, because while income tax has generally fallen, so have benefits with family allowance now means tested and other benefits capped.

The Conservative Party Manifesto makes no specific pledges for personal taxation, but reinforces its intention to reduce corporation tax to 17%.

The “triple lock” will stay till 2020. However following that it becomes a “double lock”. This means that after 2020, pensioners will still see a rise in their pension each year in line with the highest of wage inflation and price inflation. But not subject to a minimum of 2.5%. This is more generous than some predicted.

A long-term plan for elderly care

And now the part of the Conservative Party Manifesto that’s caused the biggest stir.

“Under the current system, care costs deplete an individual’s assets, including in some cases the family home, down to £23,250 or even less…..we will introduce a single capital floor, set at £100,000, more than four times the current means test threshold. This will ensure that, no matter how large the cost of care turns out to be, people will always retain at least £100,000 of their savings and assets, including value in the family home.”

In short, there will be no upside cap to the amount someone will have to pay for social care, although they will be allowed to keep £100,000 if they have it. This reverses the previous position which capped the upside but might have left the person with nothing. Other parties are already labeling it the “dementia tax”. Debts are charged against the person’s estate on death. It’s a brave move which will save the state billions, cost votes and essentially reduce someone’s inheritance. However spelling it out in the manifesto now means the government will have a mandate to see it though. Is it fair? Those with a lot more than £100,000 of assets might not think so, or their families won’t anyway. On the other hand, working people on low income might find the idea of paying tax so that wealthy people can receive care for free rather insulting, and decide that £100,000 is plenty for anyone to inherit.

Perhaps the £100,000 collar is set too low, but the principle appears sound. The question hanging in the air is: how is this not paid for by the NHS? The simple answer is that social care has never been NHS funded. A more complex answer, and one conspiracy theorists might like to play with, is that the NHS too, one day, might also only offer free care to those who don’t have assets to sell. So it’s a toe in the water for all kinds of social provision, sold to us as a mechanism for balancing out costs between generations.

The Conservatives plan to build one million homes by 2020, presumably including all those built since 2015. The manifesto includes plans for social housing including compulsory purchase orders for new council houses. Yes, you read that right. Over 30 years after the Thatcher government wanted to bring an end to council homes, this Conservative government plans to increase the stock once again.

I see no mention of the Help-to-Buy scheme that channels public money into the housing market. Maybe it will come to an end if this government is re-elected?

This was supposed to be the Brexit General Election. But many people are bored of it, including me. Essentially the Conservatives are not proposing anything in particular other than “no deal is better than a bad deal”. We won’t know for some time – knowing the EU right up until the final day – what any deal might look like. Free movement of labour? A “divorce bill” perhaps of £50-100 billion euros? Membership of the Single Market? A fairly hard Brexit is now likely, perhaps with a transition period and a trade deal rather than being part of any “zone”.

They ask us to trust them. But to do what?

One interesting piece spinning out from Brexit is the Shares Prosperity Fund, where money that would have gone to the EU will instead “…create
a United Kingdom Shared Prosperity Fund, specifically designed to reduce inequalities between communities across our four nations.” There is so much in that statement. Reducing inequality – check. Across four nations – check. A fund – check. Likely to be modeled on a sovereign wealth fund, popular in some countries, its purpose is unclear. And because it’s a fund, it requires funding. Would it be too much of an easy target for a future government to cut funding? The answer is: yes, probably. But the cleverly-worded sentence appeals to people like me who don’t connect Conservatives with reducing inequality nor raising addition funding for devolved administrations. And if it sounds too good to be true, it probably is!

The manifesto re-states the government’s opposition to another independence referendum. At least before Brexit. But in other respects, the devolved administrations are supported. One piece that nationalists might see as suspicious is a “Borderlands Growth Deal”. Encompassing local authorities along both sides of the Scotland-England border, it will be a cross-border initiative that appears to undermine the territorial integrity of Scotland. OK, it’s only a catchphrase that will mean little in practice. But Westminster connecting directly with local authorities (where Conservatives are strong), by-passing the Scottish Government, will be met with hostility.

My first impression was “boring”. The Conservative Party Manifesto avoided pretty well everything I wanted to find in it. No tax reform, no monetary reform, no land reform and less liberalism generally. It’s also very light on detail, costings and implications. More a statement of intent and flavour.

However I am intrigued by the social care proposal. Being a fan of some kind of wealth taxation, this is part of the way there. I would have preferred to see a more communal approach, which would probably amount to raising inheritance tax, rather than the “dementia tax” proposition. But I do like the mechanism of charging against a person’s estate – something I see as an option for Land Value Tax where a person is asset rich but income poor. But will the social care charge, like inheritance tax, be avoidable? Those fortunate enough to live on estates owned by offshore trusts will clearly avoid the charge. And wealthy families will likely now transfer their assets to offshore trusts at a greater speed. So without some way of obtaining money from land owned offshore, the proposal is lacking and the super-rich will get away as usual.

So while much of the manifesto is an opportunity missed, it is also a disaster avoided. Any plans from the Thatcherites to cut back o the NHS or to reduce benefits would have been worse.