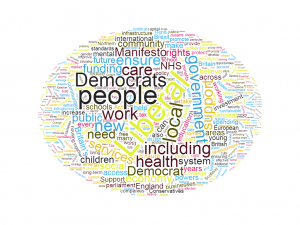 The Liberal Democrat Manifesto fights against a “hard” Brexit, commits more to health and education, an extra £100bn for infrastructure and a 1% rise in income tax

Like Labour, the LibDems make a play for “fair taxation”. The principle is the same – that those who can afford to pay more, should pay more. Income tax and dividend tax will rise by 1% (or 1p in the pound, as it’s normally expressed) and various allowances will go, like dividend tax relief and marriage allowance.

Corporation tax cuts will be reversed, implying a 20% rate in the first instance.

The LibDems propose building 300,000 new homes each year to meet demand. These include the creation of ten new “garden cities”. They also plan to allow councils to prevent the sale of homes to tenants under the “right to buy” scheme and to levy 200% council tax on empty and second homes. Landbanking will also be penalised.

Those who can’t afford to buy, or choose not to, will have improved rights as tenants, including first option to buy the homes they rent should they come up for sale. They plan a “help to rent” scheme for the under 30s, in the form of a loan, and a “rent to buy” scheme, which allows for rent payments to offset house purchase prices.

Again, like Labour, there will be more rights for tenants, particularly against “rogue landlords”.

Saving for and enjoying your retirement

Again, like Labour, LibDems propose maintianing the triple-lock on state pensions, ensuring they rise by 2.5%, wage inflation or price inflation each year. They will consider a different tax relief regime too, rather than the current 20% rate normally applied.

The Winter Fuel Payment will be withdrawn from those taxed at 40%.

LibDems have been the party for constitutional reform for decades. This year is no different. They propose giving 16 year olds the vote and introducing STV voting for local elections (this already happens in Scotland). The House of Lords will also be reformed so it has a “democratic mandate”, although whether this means direct election is not spelled out. They do not specifically mention proportional representation other than in a reference to how an England-only legislature might work.

For Scotland, the LibDems propose a halfway house to full fiscal autonomy by agreeing that the Scottish Parliament spends half of the tax revenues raised in Scotland. Another independence referendum is opposed, and the Barnett Formula will be retained, ensuring a proportion of UK spending will always apply to Scotland.

LibDems are not committed to an English Parliament, preferring a regime which excludes MPs from outside of England voting on matters that only affect England. On the other hand, they will provide for regions of England that might wish to create their own parliaments, naming Cornwall and Yorkshire as examples.

The parts that concern this blog are so similar to Labour’s that it’s hard to state anything I haven’t already stated. The parties are very different in other ways, though. LibDems are pushing membership of the EU single market and other EU institutions as a replacement to full membership in the Brexit negotiations. This includes the principle of freedom of movement. Labour, on the other hand, are becoming more wary of immigration, recognising their support has a higher Brexit flavour than the LibDems. Labour believe in large scale nationalisation, which is not a LibDem theme. LibDems prefer to regulate than to nationalise in order to exercise democratic control.

None of my preferred tax regimes are mentioned, and the word “inequality” hardly appears.