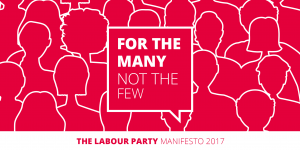 The Labour Party Manifesto includes nationalisation, tax rises and a continuation of Help-To-Buy

Labour’s tagline: “For the many, not the few”.
The manifesto can be found here.

For the purpose of this article, I’m looking at some of the key financial proposals in the Labour Party Manifesto and those which cover topics I feature on this blog. There are also parts which deal with nationalisation, welfare, the NHS and many other issues.

Without specifying numbers, Labour proposes tax increases for anyone earning over £80,000 pa. Given that earnings above £80,000 attract 40% tax currently, we can probably assume a 45% or even a 50% tax rate applied at this level. Labour claims this will affect just 5% of earners. This is a little different to Scottish Labour’s manifesto last year which advocated a 1% increase to the 20% and 40% bands and an increase from 45% to 50% for the top band.

Labour also believes corporation tax is too low. The government is slowly reducing this to 17% but Labour will want to raise it to 20% or more, with allowances for smaller businesses.

Labour also proposes extending Stamp Duty Reserve Tax (SDRT) to “a wider range of assets”. Given that this is a tax on registered assets (currently land and securities like shares) it’s not clear how the net will widen.

Labour plans to scrap the “bedroom tax”, which is not really a tax, it’s a surcharge on council tenants who have more bedrooms than the government thinks they need.

Private medical insurance will also be taxed, which they are linking to providing free parking at NHS hospitals.

Labour is considering local taxation options, including a Land Value Tax, but this is not a commitment.

Labour is basically stating that the “triple lock”, which ensures that state pensions rise by at least 2.5%, price inflation and wage inflation each year will stay. The pension bill is one of the largest government expenditures and critics of the “triple lock” have said it’s too generous and unaffordable.

Labour also rejects the raising of the state pension age further, and ending of favourable treatment to recently retired women. It also wants more regulation of workplace pensions, to make sure members get a better deal.

Home is at the heart of all of our lives

Labour proposes a new Department for Housing, recognising the worsening prospects for those waiting to buy their first house. They are talking about one million new homes, including affordable homes and homes for housing associations to rent out. Councils too will be asked to provide more homes.

The Help to Buy scheme will be continued. This is a savings scheme whereby the government adds to a person’s savings provided it’s used to buy a new home. It has been criticised for inflating house prices using taxpayers’ money and for benefiting relatively few people.

For those who rent, Labour plans to improve their tenancy rights, giving longer contracts and action against sub-standard properties. They will also restore housing benefit for 18-21 year olds which the last government removed.

As we change our constitutional relationship with Europe, we must also adjust our own arrangements.

Labour proposes reforming the House of Lords to be fully elected and to reduce the voting age to 16. Labour also recognises that England doesn’t enjoy the full benefits of devolution that other parts of the UK enjoy. It will look at how to restore this balance with regional assemblies, local mayors and a Secretary of State for England.

The Labour Party Manifesto is not as radical as many expected. But the main criticism is that it lacks numbers. There are many spending commitments and a few tax generating proposals, but it all looks rather imbalanced. So can we assume that there will be a large budget deficit and even more debt?

I don’t think the triple-lock on state pensions is usefully specified. It means pensioners always get the best deal, and will have pensions rising at least as fast as working people. Some kind of smoothing-out should be included, or perhaps the 2.5% and/or inflation parts taken away. Affordability will be most closely correlated with wage inflation.

Nice to see Land Value Tax mentioned, if only in passing. But I am disappointed with a continuation of Help-to-Buy. Better to make sure that housing supply increases and if not then taxes on properties must increase to bring prices down again. And that means something like LVT, not SDRT which only kicks in when moving house.

There were only 4 mentions of the word “inequality”. For me this is one of the biggest issues, and three of the instances referred to income inequality, not wealth inequality which is where it really matters. The fourth mention was in the context of public services.

This is the first manifesto I have covered. Others will follow.