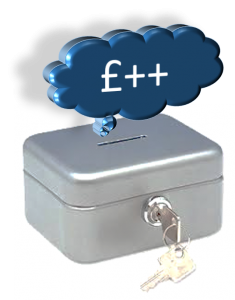 Where does money come from? Banks lend it out from deposits, right?

It is a common misconception

Banks create it from nothing. When you are offered a mortgage, the money will be created as a debt, which either you or the bank will one day have to make good. Yes, banks have deposits and they have other assets on their balance sheets, but there is no direct linkage between those assets and the new money that’s created, other than any regulatory requirement for banks to have sufficient resilience to economic fluctuations on their balance sheets. Sometimes they get this wrong, as Northern Rock and others famously did in 2007-2008. But most of the time it, well, works.

Except it works in the sense that we fail to question the consequences.

We might say “if it ain’t broke, don’t fix it”, but what if it is broke and how would we know? Let’s start with some basic statistics. Approximatelly 97% of the money circulating in the UK has been created by commercial banks. And around half of that is created for mortgages. Let that sink in for a while. For each pound in the UK, about 50p exists because it has been lent to somebody to buy property, and will one day be repaid (or, most probably, be replaced with new money created for new mortgages). And what do we think all this new money has done to the property markets? On the basic principle of supply and demand, I’ll wager that prices have risen. Check, they have. The start of this cycle (and it is a cycle) was the de-regulation of the mortgage lending market since 1977, when banks were authorised to lend money for mortgages for the first time. Prior to that, most mortgage lending was done by building societies, which were not banks, and couldn’t create money from nothing.

Most of the rest of commercial money creation is for business loans, with a smaller amount for unsecured lending like personal loans and credit cards.

So why should we be concerned? In short, we might like to ponder how long this can go on for. 2007-2008 saw how fragile the credit market can be, with sovereign loans being used to nationalise commercial debt from broken banks. Consider all that 97% of money being created from loans. And it must be repaid with interest. So if hypothetically, no more money were to be created ever again, there’s no chance of all that money being repaid. Not without some kind of helicopter money anyway, which is again sovereign money bailing out broken commercial lending. As banks create ever increasing quantities of money so new borrowers can effectively repay outstanding loans of others (yes, this is usually a gradual process), the result is inflationary pressure on the property market.

To cut a long story short, economies inflate and then go bang. The average lifespan of a fiat currency like the pound is 27 years.

The alternative to commercial money creation is sovereign money creation. Here, creation of new money becomes the privilege of the treasury. So if a bank requires money to lend as a mortgage or other loan, it borrows from the government at prevailing interest rates, and lends it on again at a higher retail interest rate, likely to be a similar level to what we already experience. The bank makes a profit on the difference and takes the risk on bad loans.

The advantage here is that money creation becomes part of a country’s fiscal policy, like setting interest rates and levels of government borrowing. If there is too much inflation, government can reduce lending. If the market stagnates, it can lend more. This might be called “democratising money creation”, as it becomes a national policy not a commercial one. One organisation campaigning for change is Positive Money. Positive Money links sovereign money creation to reducing inequality and controlling asset inflation. Their site contains plenty of information on the subject.

If there’s a counter-argument to sovereign money creation, it’s that we live in a free market paradigm and returning control to governments is just one step short of giving the king or emperor control over a nation’s money. I would argue that this is partly true. But partly untrue, because it’s the nation’s money that banks are creating, not their own. A better free market analogy would be if Bank B creates “money” to effect a purchase then it must have its name on the money. £100 of sovereign money might be worth £110 or £120 of Bank B money, because if Bank B goes bust, that money will be worthless. If I was selling a house to someone delivering money from Bank B, I would certainly want to build in some “insurance” over and above the equivalent amount of sovereign money. So a free market in bank money must carry bank risk, otherwise it’s the state picking up the tab as usual.

I have to say I’m torn on this one. In an ideal world, sovereign money creation makes sense. But perhaps we’ve gone too far, with 97% of money in circulation created by banks. In the USA, major banks are required to hold 10% of money lent in their reserves. This “reserve requirement” is commonplace in many jurisdictions, but some like the UK, Australia and Canada have no reserve requirement. A system of pure sovereign money creation means effectively a 100% reserve. It would be unrealistic for banks to be suddenly expected to cover this.

But it’s clear to me that something must be done. If our currency is to survive another three centuries (pounds sterling has been going longer than anything else) then it mustn’t go pffffff through excess money creation not must the country suffer increasing inequality during that journey, arising because those with non-monetary assets see the monetary value of those assets rise as the currency slowly becomes worthless. Money is a strange creation that has no real value. It would be better for all of us if there was no debt and money was used only to fulfill transactions, not to hold as an asset. But that’s another topic for another day.