Scotland’s finances: economic recovery in the EU or economic retreat with Brexit 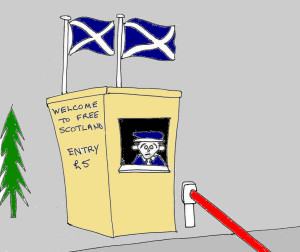 Published by the Scottish National Party

Scotland’s finances: Today the Scottish Government published Government Expenditure and Revenue Scotland – or ‘GERS’ for short – for the year 2015-16.

GERS is produced annually and provides estimates of total public spending in Scotland, as well as tax receipts for the previous five years.

Here’s what you need to know.

GERS for 2015-16 shows that Scotland’s onshore economy – excluding North Sea revenues – continues to do well. In the last financial year onshore revenues increased by £1.9 billion. Since 2011-12, onshore tax receipts have grown at about the same rate as the UK as a whole – and are up by almost £6.4 billion.

The publication shows that North Sea revenues in the past year have declined. This is reflective of the challenges that continue to face the global oil industry today, and the fact oil prices are lower than virtually all forecasters – including the UK Government – previously predicted.

The SNP states that “Analysis published by the Scottish Government shows that leaving the EU could reduce Scottish tax revenues by between £1.7 billion and £3.7 billion a year by 2030”. Whilst many will question an organisation using its own machinery to produce the answer it wanted, we might equally wonder why there is no counter argument that sees Scotland as being better off, financially, with Brexit.

The SNP-led Scottish Government’s response to Brexit has been emphasise its commitment to spending at levels above UK average (e.g. £105 per head extra spending on schools and hospitals) which, it implies, resulted in an extra 51,000 jobs being created. They claim “typical” (median?) pay in Scotland is on average higher than in England, and that Scotland is the most prosperous part of the UK outside of London and the South East of England.

How is Scotland financed?

Commentators in England often point out that Scotland is a net beneficiary of UK funds, and that Scotland will never vote for independence because that would mean it would be poorer. The SNP disputes this, of course. Showing Scotland keeping up with the rest of the UK.

Yet Full Fiscal Autonomy for Scotland remains one way forward. This way, Scotland keeps what Scotland raises in tax revenues, and receives no block grant (the amount the UK pays to Scotland from UK-wide tax receipts). That would be a major leap, not only because currently 71% of Scotland’s taxes are controlled by the UK government, but also because FFA provides financial autonomy but not political autonomy. The independence debate is more about power than economics.

So while the current arrangement only allows Scotland to control 29% of its tax revenues (actually it could be more, if the Scottish Government increased taxation, but the SNP won the election on a no-rise manifesto), the UK retains most of the power and most of the fiscal policy.

Like many in Scotland, my reaction after the Brexit vote was: Well, in that case I’ voting for independence. And like many now, I’m not sure. I was a No voter in the 2014 referendum, not because the No campaign won the economic argument. It didn’t. It failed, with a message which portrayed Scotland as too wee, too poor, too stupid to govern its own affairs. I voted No because the SNP hijacked the Yes campaign, conflating it with its own policies (e.g. remove Trident), and telling us that economically we will do well because of North Sea Oil. I didn’t feel comfortable with a policy based on the price of a particular commodity and lost faith in the Yes campaign. Then after the No voters won, the oil price tumbled and the No campaign said “told you so”, as if they knew that the oil price was going to tumble. So let’s just say there are idiots on both sides.

Rant over, another independence referendum is not currently likely. The result will likely be above the 45% achieved last time but perhaps not the 50% required to see it through. I would like to see what the UK looks like after Brexit, which might be one of the following:

So the future, as with the past, is not in Scotland’s hands. It’s a consequence of the UK’s future that will see Scots deciding if it still wants to play by the UK’s rules and the UK’s political leaders. This is why 2020 is going to be the pivotal year. The UK has a general election, which will likely be a judgement on how well Brexit has gone (if it has) and an incoming government may well need to make a pact with the SNP to gain power. The SNP’s price will be simply put.

« Is Britain on the verge of a Brexit-fuelled house price crash? Only the data will tell
The Apple Tax verdict is a two-edged sword. And here’s why. »