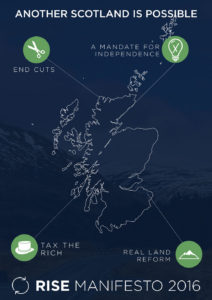 Another Scotland is Possible, according to RISE

If you haven’t heard of RISE, then that’s understandable, as they are a relatively new party made up from independence-minded socialists. One leading figure, Colin Fox, has been in Scottish politics for a long time, and was once a Scottish Socialist party MSP. Their aim is to create a socialist republic of Scotland. “RISE stands for Radical Independence”, notionally although not acronymically. “We are a product of 2014: a coalition of Yes activists, trade unionists, organisers, and ordinary people, like you, who saw the transformative potential of independence and fought for change.”.

RISE’s vision for Scotland is outside of the UK, without a monarch and without nuclear weapons.

RISE wants to recognise that those whose role in life is to look after others, family members mostly, deserve to be paid a “living income”. RISE estimates the annual cost of the LIC at around £1.78bn per year.

Inequality is rampant. It’s time for the rich to pay their fair share. RISE propose to raise the top or ‘additional’ rate of income tax on those earning over £150,000 per year from 45p in the pound to 60p – a 15 per cent increase

RISE claims that this increase will raise £140 million, rejecting any notion that high taxation will trigger a flight to Scotland’s closest tax haven, England. Middle income earners will also be taxed more, although the definition of middle income results in a lower figure (£32,000 for a family) than the usual definition (those on the 40% tax threshold).

The current income tax rates for 2016/17 include a 40 per cent band on taxable income between £32,000 and £150,000 per year after allowances. RISE believes that this band spans too large an income group – £32,800 is the Scottish median household income for a couple with children. We believe a band for the top 10 per cent of earners, levied at 45p in the pound (an increase of 5p), is fair for those earning comfortably above the median household income. We therefore propose a new band covering taxable income between £50,000 and £150,000 per year, levied at 45 per cent. This new upper rate would raise an additional £300m in Scottish revenue. Those with a taxable income between £50,000 and £150,000 per year represent the top 10 per cent of earners in Scotland and are worth almost as much as the bottom 50 per cent of Scottish earners combined.

RISE wants to shift local taxation away from the current council tax bands based on property value to a Scottish Service Tax, which is a local income tax. This has a number of bands.

RISE would like to see a LVT introduced for local taxation, and SST is seen as an interim measure before a hybrid SST/LVT is put in place.

RISE want to bring in strict minimum and maximum limits to how much someone can be paid. They recognise that they can’t enforce this, except in the the public sector whose wages are paid by the Scottish Government.

We would aim to establish a minimum income of £20,000 per annum, and raise the minimum wage to £10 per hour, rising with inflation, as well as setting a pay cap of £100,000 per year. Under devolution, these policies would apply in the public sector.

All parties appear to recognise that there is a shortage of housing in Scotland. Most support a Help to Buy scheme, or a mix of Help to Buy and social housing with affordable rents. RISE put the whole emphasis on affordable rent, with 100,000 new houses owned by a national public body, resulting in, effectively, nationally-managed and owned council houses.

There is a lot in this manifesto, and while I disagree with most of it, I commend RISE and their limited resources for setting out their stall clearly and professionally. They are unashamedly a party that wants to redistribute wealth and provide a minimum standard of living for everyone in a Scotland that is quite different from the one we have now.

I disagree with RISE regarding taxation of the well-off. Expecting someone on a 6-figure salary to pay nearly two thirds of their earnings in tax isn’t realistic. We can expect executives of the top companies to relocate to England. Even those earning around £50,000 each year will baulk at the extra taxation.

I agree with RISE regarding housing and a move to LVT. The Help to Buy schemes promoted by many other parties pushes up house prices, and the biggest winners are the housebuilding companies. Social housing, vastly reduced since the Thatcher governments of the 1980s, is really the only solution here. The market isn’t providing affordable homes, so the government must do so. I have blogged on LVT many times, and I believe this should be to raise national taxes rather than local taxes. Nevertheless, it’s still a better answer than RISE’s local income tax (SST).

I don’t know if RISE is strong enough to get any MSPs represented, but their presence would make for a more interesting Scottish Parliament even in the crowded left-of-centre space.

« Prince Special – When Prince gave away music for free!
Moses and Money – Laws about money in the Promised Land »