Moses and Money – Laws about money in the Promised Land 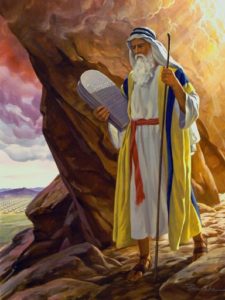 They are believed to have been written during Moses’ time of leading the Israelites from slavery in Egypt to the Promised Land, around modern day Israel. Given that Moses didn’t actually reach the Promised Land, it’s likely that laws were set out some time after the tribes of Israel settled there, as they refer to walled cities for example. So although this is called Moses and Money, we can assume that it’s really the evolving Mosaic laws that we refer to.

In this article, I am looking at what was written regarding money and land ownership. Central to this article is Leviticus 25. Now, many people find scripture dull, and by scripture standards, many would say that Leviticus has some of the most tiresome passages. By Leviticus’ standards, chapter 25 might push even the most ardent insomniacs over the edge. But I love it. I love the mathematical aspects of the laws and how the reckoning works around the numbers 7 and 50 and in particular the recognition that seven times seven is one short of 50. So I’ll turn to the basic principles as I see them.

We often find that the laws and rights pertaining to Israelites differ from those which apply to foreigners or temporary residents. These include the rights of repossessing land, being freed from debts and being exempt from slavery. Even within Israel, the Levites have a special place. As the tribe which has the role of guardians of the faith, they are funded by the other tribes and don’t have property of their own (actually there is some ambiguity about that). They also have enhanced rights of redemption of their possessions.

The rationale for distinguishing foreigners from Israelites is to make sure that the latter don’t become debt slaves.

There is a basic principle that family land can be sold but it can also be reclaimed at any time. And each 50th year (a jubilee) all land returns to its original owner . To make sure that any land sold in the 49th year, say, is sold on a fair basis, we are told to scale the price by the number of years left to the jubilee. So land sold immediately after the jubilee will be sold for 50 times the price of land sold in the 49th year, with just one year to go before it returns. In that sense, it’s more of a leasehold arrangement than a freehold. This applies whether the land was sold to a foreigner or to a fellow Israelite.

If one of your fellow Israelites becomes poor and sells some of their property, their nearest relative is to come and redeem what they have sold. If, however, there is no one to redeem it for them but later on they prosper and acquire sufficient means to redeem it themselves, they are to determine the value for the years since they sold it and refund the balance to the one to whom they sold it; they can then go back to their own property. But if they do not acquire the means to repay, what was sold will remain in the possession of the buyer until the Year of Jubilee. It will be returned in the Jubilee, and they can then go back to their property (Lev 25:25-27)

We see that under this scheme, the land remains, at least once in every 50 years, in the possession of the Israelites.

Laws about property in cities is a little different. Here, the right of redemption lasts for one year only and there is no return at the jubilee, apart from property originally belonging to Levites.

Slavery is permitted under Mosaic law but slaves must be foreigners.

Your male and female slaves are to come from the nations around you; from them you may buy slaves. You may also buy some of the temporary residents living among you and members of their clans born in your country, and they will become your property. You can bequeath them to your children as inherited property and can make them slaves for life, but you must not rule over your fellow Israelites ruthlessly (Lev 25:44-46)

There is a recognition, though, that Israelites might fall on hard times too, and need a place to stay, even after having sold their land. If a landowner wants to take in fellow Israelites, they cannot be slaves, but they can sell themselves into bonded labour and must be subsequently be paid the rates that foreign bonded labourers are paid. As with land, bonded labourers are set free in the year of jubilee. Confusingly, another passage (Deut 15:12) suggests the setting free happens every seven years. Maybe there is a different type of bondage implied.

There is a further clause that if an Israelite sells himself (and by implication, his family) to a non-Israelite, there is a chance for a relative to buy out the contract.

If a foreigner residing among you becomes rich and any of your fellow Israelites become poor and sell themselves to the foreigner or to a member of the foreigner’s clan, they retain the right of redemption after they have sold themselves. One of their relatives may redeem them: An uncle or a cousin or any blood relative in their clan may redeem them. Or if they prosper, they may redeem themselves. They and their buyer are to count the time from the year they sold themselves up to the Year of Jubilee. The price for their release is to be based on the rate paid to a hired worker for that number of years. (Lev 25:47-50)

Again we see prices adjust for the time to jubilee, when the contract is worth nothing anyway.

Many of us might have come across the principle of usury, and how many religions consider it sinful. Usury might be considered to be making money from money, or profiteering. Charging interest and selling goods for a profit without adding value to ythem might be considered usury. Well, this certainly applies if you are an Israelite lending to an Israelite.

We see the start of a social code here. People need to be told how to be nice to one another. But this doesn’t prohibit borrowing and lending, just the kind of borrowing and lending that takes advantage of those who need money to live. Money can be lent, presumably for business ventures, for example. And when it is lent, it doesn’t have to be repaid if the borrower doesn’t make a full repayment at the end of one of the 7 year cycles.

At the end of every seven years you must cancel debts. This is how it is to be done: Every creditor shall cancel any loan they have made to a fellow Israelite. They shall not require payment from anyone among their own people, because the Lord’s time for cancelling debts has been proclaimed. (Deut 15:1-2)

There are further warnings not to withhold lending simply because the time to the end of the seven years is nearly due. That, we are told, is a sin.

Needless to say, none of this applies to any loans to foreigners.

You may require payment from a foreigner, but you must cancel any debt your fellow Israelite owes you (Deut 15:3)

A tithe of everything from the land, whether grain from the soil or fruit from the trees, belongs to the Lord; it is holy to the Lord. Whoever would redeem any of their tithe must add a fifth of the value to it. Every tithe of the herd and flock—every tenth animal that passes under the shepherd’s rod—will be holy to the Lord. No one may pick out the good from the bad or make any substitution. If anyone does make a substitution, both the animal and its substitute become holy and cannot be redeemed. (Lev 27:30-33)

It’s interesting that the 10% rule on livestock applies to the total number of animals, so the tithe is more of a wealth tax than an income tax. And where do these tithes go?

I give to the Levites all the tithes in Israel as their inheritance in return for the work they do while serving at the tent of meeting. (Num 18:21)

But the Levites don’t get to keep it all. They in turn must give it to the Lord.

Speak to the Levites and say to them: ‘When you receive from the Israelites the tithe I give you as your inheritance, you must present a tenth of that tithe as the Lord’s offering. (Number 18:26)

This piece of maths is kind of fair. The Levites get 10% of the wealth of the other 10 (one tribe was “lost”) tribes, but this makes their wealth greater than their fair share. If there are 10 other tribes, this means that if each has 10 units of wealth then each give one unit to the Levites, leaving them with 9 each and the Levites with 10. But the Levites in turn give up 10% to the Lord, so they too are left with 9. Or put arithmetically, 9 times 11 is 99.

The beauty of the Mosaic system of running the economy and personal finance is that not only does it make sure nobody rips off their fellow nationals but also that wealth stays within the nation and doesn’t get leached to foreigners. On the other hand, profiteering from foreigners, including trading them as slaves, is perfectly permissible. It’s often written that “history is written by the winners”, and we might conclude that this was a highly successful society that operated as a local power centre.

These passages give us an idea of how the laws of Moses and money set out the rules on financial relationships between Israelites. Basically, no usury, no permanent property sales, bonded labour only for short periods and absolutely no slavery. That they could do all these things to foreigners might remind us of how our financial system works today, and perhaps there are lessons for us all?