‘This Is Spinal Tap’ creators reunite for $400m lawsuit 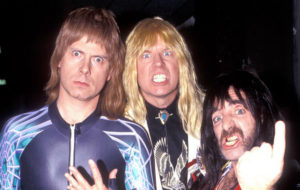 Christopher Guest, Michael McKean, Rob Reiner and Harry Shearer say they have been denied “their rightful stake in the production’s profits”.

Shearer, who voices several characters on The Simpsons including Mr Burns and Smithers, filed the original lawsuit against French company Vivendi SA in October. It alleges that Vivendi SA “engaged in anti-competitive and unfair business practices, as well as fraudulent accounting” in its management of This Is Spinal Tap, which has been voted the funniest comedy film of all time.

According to The Guardian, Shearer’s original lawsuit, which sought $125 million (£100 million) in damages, has now swelled to $400 million (£320 million) with the other three co-creators on board. The co-creators are claiming they have been denied “their rightful stake in the production’s profits”.

Full story in the NME

Even if you haven’t heard of Spinal Tap, the phrase “This one goes to 11” has become part of rock’n’roll’s legacy to the English language. It was their claim on their iconic film This is Spinal Tap to be the loudest band in the world because their amplifier’s volume control was graduated 1-11 rather than the usual 1-10!

Channeling that vibe, Spinal Tap’s co-creator Rob Reiner stated “Such anti-competitive practices need to be exposed. I am hoping this lawsuit goes to 11.”

It’s a story we have heard many times before. Recording companies, and now film studios, frequently profited by huge sums leaving the performers with almost nothing once various fees and deductions were removed from revenues. This article explains in greater detail how this happens. An example was the Bay City Rollers, a massive band in the mid-1970s but are still fighting for their fair share of the profit.

The lawsuit against Vivendi goes further, accusing the company of fraud. Vivendi reported that This is Spinal Tap, to which they bought the rights in 1989, brought in only $98. And to add insult, only $81 was distributed amongst its four creators.

It’s an unfair world. Everyone on the make, at everyone else’s expense. In the case of a global corporation like Vivendi, their only aim is to maximise profits. And if that means using every accounting and legal tool they can find in order to minimise the amount they need to share with their collaborators then it’s what they will do.

In the 21st century there are many other ways recording artists can create and publicise their creations. We have seen stars of YouTube, we have seen online music streaming, and we have seen crowdfunding as a way to offset the cost of production from fans’ subsequent purchases.

Without any clarity in the legal processes, there will be many other cases where a judge will decide who is entitled to what. This can also involve disputes between band members (as happened with Spandau Ballet) and bands with their managers. It’s a dirty business and songs have been written about it, such as Pink Floyd’s Have a Cigar.

Hard to know what to do about past misdemeanours, but more clarity in legal contracts will ensure that bands – often young and eager – have equity in their creations.