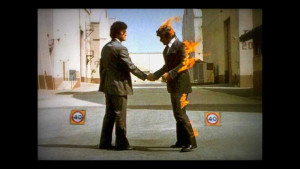 In September 1975, Pink Floyd released the album Wish You Were Here, featuring the title track and the prog classic Shine On You Crazy Diamond

Back in 1975, interest in progressive rock music was peaking in the UK. Characterised by long tracks, concept albums, experimental musical arrangements and enigmatic lyrics as well as a preference for albums over singles, Pink Floyd were one of the most famous bands of the era. Wish You Were Here frequently appears in lists of the best rock albums of all time. There is also tangential interest from this site through some of the themes which Pink Floyd explore.

My first hearing of the album was a few months after its release on a school ski trip, on a friend’s cassette player. Although it competed for air space with another friend’s “Shadows’ 20 Golden Greats” and perhaps wasn’t the best listening environment, its haunting music and odd song titles stayed in my mind for long enough to appreciate listening to it for real some years later.

This is my third post on musical anniversaries. Please also visit:

Background to Wish You Were Here

Pink Floyd had already been around for ten years by the time Wish You Were Here was made. Their previous album, Dark Side of the Moon, had already placed Pink Floyd among the top bands of the early 1970s, and it went on to sell 40 million copies. When Pink Floyd returned to the studio in January 1975, new material did not come easily. In fact of the three songs which they had to hand, only one made it onto Wish You Were Here. Dave Gilmour explains in this interview how the band took time to find the kind of music they wanted to include and the theme which the album would follow.

According to Dave, the theme of the album was “absence”. However, that didn’t stop two of the tracks being about the excesses of the music business.

The mournful yearnings of Shine On You Crazy Diamond and Wish You Were Here, both referencing the absence of Syd Barrett, were fuelled when Syd himself dropped in to the recording studio. He was barely recognisable from the spritely young rock star of the 1960s and Roger Waters stated that he found his appearance disturbing.

Shine on you Crazy Diamond

You reached for the secret too soon, you cried for the moon.
Shine on you crazy diamond.

Shine on you Crazy Diamond appears in two parts – at the beginning and at the end of the album. The Crazy Diamond in this case was Syd Barrett, founding member of Pink Floyd whose drug addiction led to his leaving the band in 1968, and Dave Gilmour joining it. He was very much the “creative spirit” of the early Pink Floyd and this track is a kind of tribute to him. This was the only track of the initial three which made it onto the album, the other two had to wait for “Animals”. Roger Waters provided the vocals.

Nothing to do with Pink Floyd, but my recent post on Crazy Diamonds might be of interest to some!

Welcome to the Machine

Welcome my son, welcome to the machine.
What did you dream? It’s alright we told you what to dream.

Sung by Dave Gilmour, this song is about the disillusion which the band had with the musics industry, into which they had been sucked as a result of the big-selling Dark Side of the Moon. In true prog-rock style, we hear not just the usual 4/4 and 3/4 but also 7/4 timings in this song. Pink Floyd had already had a big success with 7/4 in the form of Money on Dark Side of the Moon.

The theme of a money-driven culture had already been explored in Money, on Dark Side of the Moon. It’s a theme which runs through Wish You Were Here and never really goes away, right up to The Final Cut, the last album with Roger Waters in the line-up in 1983, which explores war and its economic consequences.

Well, I’ve always had a deep respect, and I mean that most sincerely.
The band is just fantastic, that is really what I think.
Oh by the way, which one’s Pink?

Possibly the most well known fact about this track is that it wasn’t sung by anyone in Pink Floyd. Vocals were provided by Roy Harper, who happened to be recording elsewhere in Abbey Road at the time. Roy is quite dismissive of his role as if it’s a distraction from his own material, and simply states, when asked “They couldn’t sing it, and I could”. Roger Waters often says in hindsight that he wished he had sung it.

The most famous line is probably the one finishing “…which one’s Pink”. This refers to a question the band were often asked when people assumed that Pink Floyd was the name of a person and everyone else was his band. Other references in the song relate to people in the music business.

Wish You Were Here

The title track and possibly the most timeless on the album. It featured in London’s 2012 Olympic Closing Ceremony, sung not by Roger or Dave but by Ed Sheeran. Nick Mason played drums. Dave Gilmour plays an acoustic version in his live set, and the song features in his 2015/6 tour setlist.

As with Shine On You Crazy Diamond, Wish You Were Here is about Syd Barrett.

Wish You Were Here legacy

According to Wikipedia, Wish You Were Here had sold 13 million copies by 2004, and a reasonable estimate would be 15 to 20 million by 2015. This is approximately half the sales of Dark Side of the Moon, and probably behind The Wall too. Nevertheless, it remains an iconic contribution to UK progressive music and, with Ed Sheeran among its fans, still popular today.

Most of the material was written by Roger Waters and Dave Gilmour. However they did not enjoy a close working partnership and by the time The Wall was made in 1979, Roger Waters had pretty well taken over the band. He left in 1983 after The Final Cut and insisted that the remaining members (Gilmour, Nick Mason and Richard Wright) refrain from using the Pink Floyd name. However Pink Floyd continued under Gilmour, fending off court challenges instigated by Waters.

The band reunited in 2005 for the “Live 8” concert, putting their past differences behind them. But their resolve was not strong enough to cement a permanent reunion, and Gilmour confirmed that Pink Floyd had ceased to exist.

Syd Barrett, a recluse for 35 years, died in 2006. The former Pink Floyd members performed at his memorial concert but not as a unit. Syd continued to receive royalties from the early Pink Floyd recordings throughout his life.

Richard Wright died of cancer in 2008.

Roger Waters continues to perform The Wall, with occasional appearances of Gilmour and Mason.

Gilmour and Mason released “The Endless River” in 2012 as Pink Floyd, using recordings featuring Richard Wright, mixing in other instruments. But this time, it was really the end.

pink floyd, wish you were here