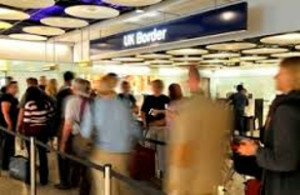 Net immigration hit 330,000 in the year to March 2015. These are, of course, official statistics. But it is record immigration nonetheless. We can only estimate how many more people arrived concealed in trucks and containers.

What do the parties say?

The Conservative party, as a government, set a target of 100,000 people. Clearly that’s not even remotely attainable. Immigration Minister James Brokenshire said the statistics were “deeply disappointing”.

The Labour Party, being leaderless, speaks with multiple voices. Leadership candidate and current shadow home secretary Yvette Cooper said the prime minister “needs to stop the dishonesty over his failed immigration target”. But her rival Jeremy Corbyn took a different position, saying we should celebrate the record net migration figures and that he’s “proud to live in a multicultural society”.

Unsurprisingly, UKIP leader Nigel Farage claims only his party stands for cutting net immigration into what he calls Borderless Britain.

The LibDems see immigration as positive for the UK, bringing in skills and experience. Their immigration policy would be to manage immigration rather than restrict it. The SNP tends to agree and highlights the benefits of immigration.

Is immigration good or bad for the UK?

In terms of the UK economy, investigations point to immigration as being positive for the UK economy. Many immigrants come to the UK to work, and therefore cost the country nothing, and probably even increase the country’s net worth, to the tune of billions of pounds.

Additionally, the UK’s demographics indicate an ageing population that has insufficient people of working age to sustain it. Immigration is one solution to this, argues Amlan Roy of Credit Suisse. However that analysis seems not to take account of the “time bomb” of those immigrants themselves reaching retirement, presumably requiring support from ever more immigrants of working age like some kind of Ponzi Scheme.

The problem seems to be that while many immigrants are from the EU and have arrived to take up a job or to study, a small number come to the UK to claim benefits or health care. I say “problem” because that’s how those who oppose immigration appear to view the issue. In fact the proportion of immigrants claiming benefits is far less that the proportion of UK nationals claiming benefits. So, taken as a whole, the portrayal of immigrants as scroungers is inaccurate if taken relative to the UK population as a whole.

When the conversation is opened up with those who claim to be anti-immigration, what they really mean is that some immigration should be encouraged and some not. The UK would have shortages of medical staff, for example, if it weren’t for non-UK medics practising in the UK. Universities would struggle to survive too, without all of that foreign fee income. What people really want to stop is the influx of “economic refugees” from parts of Africa and Asia and, to a lesser extent, EU nationals who “take our jobs”.

Anti-immigration groups tend to be right-wing in their politics. Yet the Adam Smith Institute, itself identified as being well towards the right, uses free market ideology to advocate immigration. Right-wing anti-immigration ideology as we think of it today largely starts with Enoch Powell, whose concern was less about economics than about clashes of cultural values. But he was writing about immigration from former British colonies rather than the EU, where many immigrants arrive from today. UKIP, whose supporters are probably closest to Powell’s politics, would like to see some kind of selective immigration, based on a points system along the lines of the Australian model. They wouldn’t distinguish non-EU nationals from EU-nationals, who can come to the UK without a visa. This would be illegal for an EU nation, but then again UKIP wants the UK to leave the EU.

A more quirky free market approach to immigration was promoted by the IEA in 2011 and was revisited by them this week. It involves selling a limited number of visas, justified on the basis that those willing to pay are the same as those prepared to work. It also raises revenue for the treasury.

How much does it cost to not have immigration?

Apart from the loss of several billion pounds to the UK economy, preventing immigration also has a cost. Being situated on islands, immigration is more easily controlled in the UK than with countries having land borders. The UK’s only land border is with the Republic of Ireland, from where there is no restriction on immigration. Legal entry points are therefore airports, sea ports, and famously the Channel Tunnel. At Calais on the French side of the Tunnel, thousands of would-be migrants have been camping, waiting to stow away on vehicles and trains and even walk through the tunnel. The UK border has effectively been moved to Calais, so nobody can enter the tunnel without passing UK border control. And the UK has contributed £5m to help the French police contain the migrants. The migrants hope that the UK will eventually relent and let them through.

Drivers caught with illegal immigrants in their vehicles face fines – £2000 per immigrant – even if they report the immigrants to the border police and the immigrants are refused entry. Usually drivers are not aware of their guests’ presence. Fines totalling millions of pounds have been issued, mostly at the expense of the haulage industry. In return, truckers protest that their job is to move goods,not to police the border.

The debate will run and run in the UK. Some, like Labour’s Jeremy Corbyn, don’t see immigration as a problem. But many other political leaders do. In the end, UK voters will decide what package of policies they vote for, and the trend in recent years has been a movement towards restricting immigration. Whether the government comes close to achieving its target of 100,000 per year is questionable, as is exactly how it will achieve this given more than 100,000 arrived from the EU alone. A UK exit from the EU will allow the UK to restrict EU immigration, but given that non-EU immigration is also at a record high it remains to be seen exactly how that will work.

If, on the other hand, the UK moves towards a more liberal immigration policy, perhaps under a future Corbyn government, or even because free market ideologists win the debate, then we can expect a massive increase in population. There may be an economic boom, but it will be at the expense of higher living costs and fewer open spaces. London would perhaps look more like Hong Kong, with clusters of tower blocks to accommodate the burgeoning population.