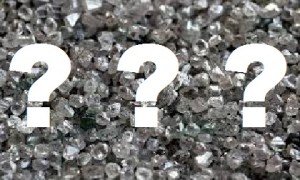 Diamonds are forever, as the song goes. And that’s kind of true. But does that make their case for investment the same as that for gold?

Diamonds, and indeed other gem stones, attract a huge price because of their rarity and their indestructibility. And as many songs about diamonds seem to suggest, there is more than simply a market price for these shiny stones. They lead us to believe that men can attract the hearts of the most desirable (and rich) women by gifting them, exemplified by Marilyn Monroe’s performance of “Diamonds are a Girl’s Best Friend”.

But sex aside, do diamonds make as good an investment as gold? Let’s take a look at some of the comparisons.

I wrote about money and how it relates to gold back in April 2015. But what about diamonds? According to Mike Maloney, money should have the following qualities:

Interestingly he states that currencies like dollars and euros fail the last of these tests. This is simply because the dollar today buys less than that same dollar would have bought at some time in the past. Inflation is caused by scarcity and by the increasing money supply through Quantitative Easing (QE) and bank lending. Maloney goes on to state that only gold and silver (and possibly by implication a small number of other metals) pass all these tests.

Which of these tests does diamonds pass? Well, not many. Probably only durability and portability, and to a lesser extent their use as a medium of exchange. As a unit of account, no two diamonds are the same and unlike gold they cannot be purified to make them the same. And whilst they are divisible, they are probably the hardest substance known to humanity to divide and in practical terms I think we need to fail this one. Diamonds are fungible to a degree. If you and I have exactly the same diamond, it is possible that we get similar if not identical valuations. But again in practical terms, diamonds have different sizes, cuts and clarities meaning that they are more like houses. We might have the same type of house but we won’t fetch the same price.

Finally are diamonds a store of value? That’s our next question.

Diamonds as a store of value

Maloney demonstrates that gold is a store of value because of its inflation-resistant qualities as well as how its total value always accounts for the total money in the world. Valuing gold is easy – it trades every second on metal exchanges in a number of countries. Diamonds only trade when a buyer and seller come together and agree a price. This not only skews the measurement of the diamond market according to what types of diamonds are and aren’t fashionable at any given time, it also makes historic statements about general changes in values of diamonds hard to make.

For reasons which will become apparent sometime soon, I chose a 40-year period of observation, 1975-2015. Obtaining some kind of diamond index was the next challenge. Products do exist, at a price, but tend not to go back 40 years. However there exists a newsletter called The Gemstone Forecaster which gives us some clues. Reading the chart for “Diamond, 1 carat, D-FL, round” we see that 40 years ago one of these would have cost about $7,500 whereas today (Spring 2015) we’re looking at about $20,000. The author does go on to point out that “You can buy a plethora of D-FL diamonds on Blue Nile for $20k per carat or less”, so $20,000 is perhaps on the generous side. So we’re looking at around 160% appreciation over the period.

How does 160% appreciation compare to inflation? According to data obtained from the USA’s Bureau of Labor Statistics, $100 in 1975 is equivalent to $453.52 today, which means 353% inflation over the period. In short, diamonds have not kept up with inflation. You can sell your $100 diamond bought in 1975 for $260 today but you will find its spending power little over half of what it was back then. Gold, on the other hand, is worth about seven times what it was back in 1975. So, diamonds are not a good store of value.

Diamonds as an investment

As we saw above, diamonds have appreciated 160% over 40 years. But most of that was in the first ten years of that period. Here’s the chart (reproduced from The Gemstone Forecaster). 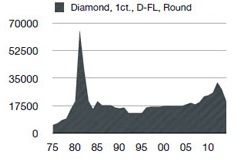 Another source gives a slightly better return. Some interpolation is needed, but it looks like an appreciation of more like 200% over 40 years. Over the last 30 years, diamonds have not been a good investment at all, unless an investor has been skilled enough to have picked out the various tops and bottoms along the way. The spike in 1981 likely caused a few casualties too. This observation appeared in a Wall Street Journal article recently.

In comparison, gold, as we have seen, rose 600% over the same period. The S&P 500 over 40 years (to 24 August 2015) is up 2200%, and that’s before dividends! Other equity indices will also have risen considerably over the period. So diamonds as an investment? No, not really.

Why the fuss about diamonds, then?

Clearly someone is making a lot of money out of diamonds. It’s not the investors. It might be the jewelers (check out Tiffany’s share price). But a more plausible answer is the diamond miners. Through the De Beers company, the Oppenheimer family once had a monopoly on the diamond trade and even today control an estimated 70% of it. This gives De Beers control over the supply of diamonds and an interest in their demand. It is no coincidence that we associate diamonds with sex and self worth. De Beers spends a lot of money on advertising to sustain this myth, and millions of men consequently believe they should be buying diamonds for the women in their life and millions of women believe that diamonds are a must-have. It is interesting that now diamonds can be manufactured using an industrial process, De Beers’ proportion of total diamond supply will drop further. Basic economics tells us that diamond prices will fall as a result of increasing supply and, perhaps, diamonds won’t be seen as so much of a must-have any more.

Thus far, I have spoken of diamonds as if they were a homogeneous mineral. They are, after all, pure(ish) carbon. In fact, no two diamonds are absolutely identical. Even in their purest form, their size (obviously) and cut will affect their price. The front page of BlueNile.com illustrates seven basic shapes of diamond. But really the number is infinite (e.g. heart-shaped diamonds), although the angles of cut are chosen for the way light is internally reflected. The highest price diamonds also have the highest clarity. The more cloudy, the cheaper the diamond (generally speaking).

Diamonds don’t even have to be “white”. In fact the priciest diamonds are not white, with pink diamonds costing several times what their white cousins cost. One pink diamond sold for $83 million! Coloured diamonds are really impure diamonds, so it’s not purity per se that diamond buyers look for, but the aesthetic and rarity value of the stone.

Diamonds don’t have a monopoly on precious gems. Some of the most sought after stones are sapphires, rubies and emeralds. Others I had never heard of before researching this article, like Jadeite, Serendibite and Painite.

So whilst diamonds look impressive, and are the cause of a number of great songs, it takes an expert investor or trader to make money out of them. For the rest of us, they are likely to become another depreciating asset.