Corporation Tax – has it had its day? 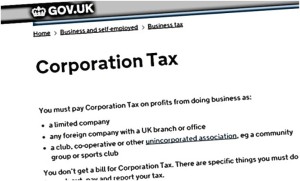 So Google has agreed to pay £130m tax to the UK government. What does this say about our tax system?

Each year I fill in my tax return. With precision. Occasionally some nice person from HM Revenue & Customs will contact me, asking whether I’ve perhaps missed out a bit of bank interest here or a company benefit there. Usually they are right. Always the amount is tiny.

Corporations, on the other hand, kind of negotiate their tax charge. We might argue that for large corporations, calculating tax accurately is far too labour intensive. We might also argue that there is often a grey area as to what taxes might fall on a particular item in a company’s accounts. A negotiated settlement is a pragmatic solution.

to the UK government. And Starbucks might have paid £8.1m in 2014-2015 but that’s almost as much as it paid in the 14 years prior to that. There are many other examples where companies’ accounting policies have allocated profits to subsidiaries in jurisdictions charging no tax even if those profits arose from transactions in jurisdictions like the UK where tax is payable. None of these corporations are breaking any laws, strictly speaking, and the onus is on HMRC to prove otherwise. The fact that HMRC officials are reported to have cosy relationships with finance directors doesn’t help.

The Ripped Off Britons blog explains how Npower leveraged tax regimes in three countries to avoid paying tax. It’s a complex yet once understood, remarkably simple way of ensuring dividends received are taxed in Germany, profits paid as dividends are taxed in Malta and meanwhile interest on a Maltese loan is paid in the UK.

Richard Murphy is a UK tax campaigner who, apart from being admired by Labour Party leader Jeremy Corbyn, is highly critical of the way companies use geography to their advantage. Here is Richard’s analysis of Google’s approach to UK tax.

There is no question that taxes should be paid according to the law of the land. But there are strong arguments that corporation tax has had its day, and in the global economy of the 21st century where onshore companies compete with virtual suppliers like Netflix and Google, is it even possible that a consistent tax regime can be applied to all local participants?

The Adam Smith Institute is one organisation that believes that corporation tax is really a tax on people. One analysis shows that nearly 60% of corporation tax comes from workers’ wages. Elsewhere they campaigned for the scrapping of corporation tax, and just this week stated that Google’s payment of £130m nothing to celebrate. Certainly if corporation tax was scrapped then it sounds like UK companies would be the main winners given how little is collected from large US companies.

While sites like Ripped Off Britains brings to our attention tax avoiding companies, and the Adam Smith Institute does too for different reasons, surely it’s right that if the country is to impose a corporation tax, then it should at least collect it fairly.

If not corporation tax, then what?

Corporation tax in the UK raises around £40 billion each year. The tax rate of 20% is one of the lowest rates in major economies worldwide. If it were to go completely, that £40 billion would have to come from somewhere, and that somewhere will almost certainly have to be personal taxation. With VAT at 20% and raising around £100 billion, a rise to 28% will cover the deficit. But wouldn’t that be just as regressive, leading more goods and services to be acquired overseas? Income tax fares little better. And while it’s theoretically true that the removal of corporation tax should result in more pay, nobody seriously believes it’s a 1:1 relationship, so replacing corporation tax with income tax will mean employees being worse off while executives enjoy larger payouts. Maybe higher rates of tax at the top bands can correct that anomaly, but the pressure on tax rates is downwards rather than upwards. Also the capacity for large earners and payers to innovate their way out of taxes is legendary.

The only meaningful way of raising taxes is to consider who gains and who loses. I have argued before for a wealth tax, and I see no reason to change that view if corporation tax is scrapped. Those with the most to gain from a prosperous, safe and lawful nation are those who own the largest bits of it. A tax on land value is the easiest to collect, but perhaps we should also consider a tax on currency. There are many ways of taxing cash, such as making it totally digital, so it can’t be hidden, and even by reducing its value through quantitative easing.

The point is, that corporation tax arises because of our way of recognising a corporation as we might a person. Indeed the latin word corpus, from which corporation is derived, means body, as in a body of people in both senses of the phrase. Both types of bodies are liable for tax. Perhaps we need to start recognising that corporations are actually made of people, and it shouldn’t be too much of a leap of logic to tax the people forming the corporation rather than the corporation itself. If those people benefit from living and being protected by the UK then it’s right their assets should be taxed.

Corporation tax or not?

Although I despise the antics of large corporations avoiding paying taxes which small companies have to pay, the solution is probably not employing thousands more public servants to chase down non-payers who will become ever more elusive and innovative in their avoidance schemes. The solution is probably to make the problem go away completely, and let companies do what they should do – employ people to make things. Yes, personal taxation will have to increase. But if that can be done in a way that places the burden on those with wealth rather than income then some kind of balance can be restored. The losers under that system will be those people sitting on wealth that’s doing nothing. But we might argue that such wealth is part of the value of the nation anyway, so taxing it to make the nation function is ethical.

I don’t see corporation tax disappearing any time soon. But I might be persuaded that it has had its day.