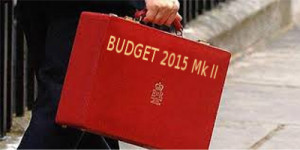 Why Summer? Because we’ve already had one this year, and with a change in government (kind of) we’ve been treated to another.

We discussed the Chancellor’s options for cutting £12 billion a few days ago, predicting tax cuts as well as large spending cuts. Let’s see what happened.

Tax reforms – could be good or bad!

We predicted a big hit to tax credits. We were right.

The anouncement which the Chancellor saved till the end, and was intended to grab the headlines was: National Living Wage of over £9 per hour by 2020, starting with £7.20 per our in April 2015. Other important parts of the budget were:

It looks like the Chancellor is giving with one hand and taking a bit more with the other. The intended £12bn will not be saved immediately, but by 2019-2020 he intends there to be a budget surplus, presumably to make up for the deficit today.

Right wing think tanks the Adam Smith Institute and the IEA have criticised the budget for its National Living Wage. These organisations have never favoured a minimum wage anyway, so that is to be expected. Other right-wingers would like to have seen the 45% tax rate go – perhaps we can expect that next year. The taxing of “non-doms” has also drawn criticism, as these people spend money in the UK and provide employment. But then again so do many non-non-doms. The National Living Wage looks like a smart move, politically as much as anything else. The Conservatives want to be seen as the party for working people, and they hope that along with the raising of the personal allowance, they will not be seen as a part just for the rich.

But are the low-paid better off? With tax credits being cut, possibly not. Labour’s response was to acknowledge that the deficit had to be cut, but not to the cost of the low paid. Speaking for Labour, Harriet Harman said she would like to have seen more investment into infrastructure and skilled workforces.