Lord King: Scotland could be independent 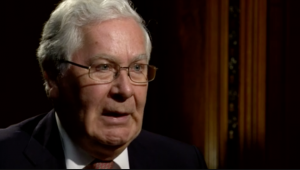 Scotland could be an independent country but would risk a hit to its public finances, the ex-governor of the Bank of England has said.

Lord King told BBC Newsnight that while questions had been raised over which currency an independent Scotland would use, he did not see “major problems”.
But he said it could be a challenge to borrow on the international markets.
On Brexit, he said his “biggest worry” was “obsessed” politicians ignoring the trade deficit and NHS funding.
Theresa May has said it is not the time for a Scottish independence referendum.
But Scotland’s First Minister Nicola Sturgeon said she remained “determined” to have an independence referendum on her timescale.
Lord King, who headed the Bank of England between 2003 and 2013, said there are plenty of small countries the same size as Scotland, and it “certainly” could be independent.
“It has… the people, it has a capital city, a history and culture, it could be an independent country. The question is, does it want to be given the consequences of it?” he said.

Is it down to economics?

Arguments about whether Scotland could be independent or not always seem to come down to economics. The independence referendum in 2014 was preceded by all kinds of arguments about currency, debt and pensions. The “No” campaign was summed up by the phrase attributed to John Swinney, deputy First Minister, as one of calling Scots “too wee, too poor, too stupid” to run their country. The Yes campaign unsurprisingly focuses on Scotland’s potential, comparing it with Norway and Denmark. Indeed the SNP has created a “Growth Commission” to do just that.

One unknown issue is Scotland’s subsequent relationship with the UK. Would the UK effectively say **** off? Or would it seek to forge a new union of independent states? After all, how many people either side of the border really want a different currency, border controls and tariffs on goods or even people? I would like to think there is enough worth saving regardless of independence, but if the UK plays hard to get, as it appears to be gearing up for with Brexit, anything could happen.

Another unknown is whether Scotland would join the EU. This may be incompatible with being part of a union with the UK. But if there’s going to be a hard border anyway, that issue goes away. Joining the EU would likely lead to using the Euro as a currency. It would also leave the UK in the weird position of being surrounded on all sides by EU member states. At this stage it is unclear whether Scotland would be accepted into the EU or even if voters would want it now that the UK has chosen to leave. But that does not stop an independent Scotland joining the EEA, giving unfettered access to the EU’s Single Market. It’s a kind of halfway house between EU membership and complete isolation, and may yet be the UK’s final destination.

To answer my own question, the answer for many is: No. Economics might be part of the discourse but pride is another part, which not only drives Scotland to want to self-govern because of optimism over future prospects, but also feels insulted that it is told it needs funding from the UK to be viable. Depending how the numbers are calculated, it can be demonstrated that Scotland benefits financially from being part of the UK. WHich takes us full circle to Lord King’s comments.

Of course Lord King is correct. Scotland could be independent and succeed as a nation. But it also must realise it risks falling living standards compared with the UK, both through losing funding from the UK government and through finding it harder to raise debt on international markets if it has its own currency. But, of course, it might do better, especially if it can be canny about maintaining good trading relationships with the UK, with the EU and with other nations. And bagging all three is the hard part.

« Scotland’s currency – what are the choices?
Article 50 : What do Britons want from Brexit? »